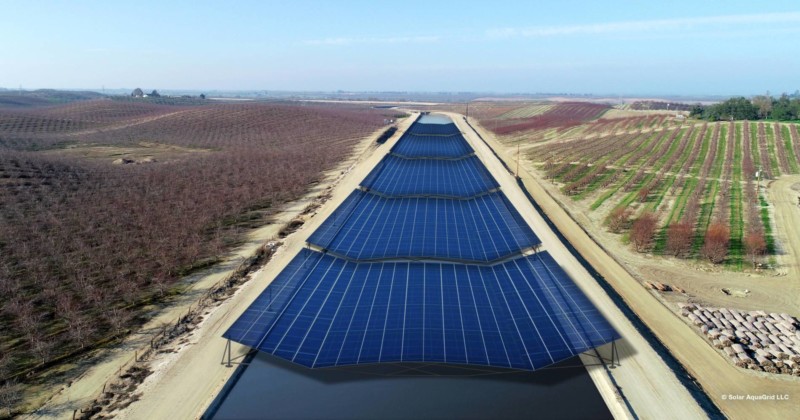 In a first for the US, the state of California has given a $20m grant to a project that will test the benefits of covering canals with solar panels to generate electricity and reduce evaporation, thus conserving the state’s scarce water.

A combined 8,500 feet of two canals operated by the utility company Turlock Irrigation District (TID) will be covered by June 2023, generating some 5MW, says the University of California, Merced, one of the scheme’s participants.

Called “Project Nexus”, the pilot’s aim is to test an hypothesis put forward last year by scientists saying that covering all of the state’s nearly 4,000 miles of canals with solar panels could generate 13GW of electricity and save 63 billion gallons of water a year.

The water saved annually would would be enough to irrigate 50,000 acres of farmland or provide domestic water for some 2 million people.

“Project Nexus has the potential to demonstrate a new, innovative water-energy nexus project that can be replicated elsewhere in the state and nation to increase efficiencies in managing limited natural resources,” TID said.

Only the Indian state of Gujarat has tried such a system before.

Golf courses could be turned into something much more useful and eco-friendly — and some places are doing just that.

Buildings should be more productive, and it starts with growing food on our roofs.

“It’s different, it’s new and it’s innovative, and that’s something that I think TID should be proud of,” TID board president Michael Frantz said. “Change is hard, but the climate keeps changing, so it’s inevitable.”

Last year’s study by researchers at the Merced and Santa Cruz campuses of the University of California suggested that covering California’s canals could get the state halfway to its 2030 goal for clean power.