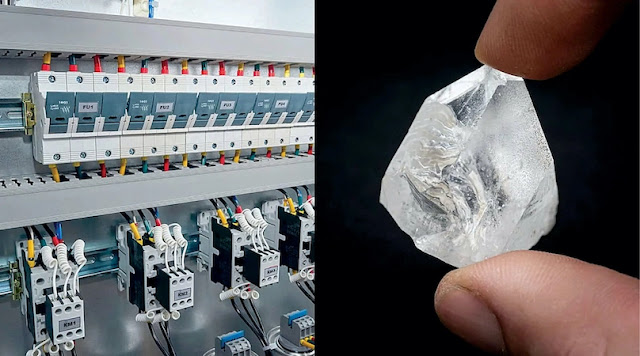 We have an unquenchable energy need. When we need to run anything that cannot be plugged in, electricity will have to come from a battery, and the quest for a better battery is being launched in laboratories around the globe. Hold that thought for a moment.

Nuclear waste is radioactive waste generated by nuclear power plants that no one wants to be kept near their houses or even carried through their communities. The ugly substance is poisonous and deadly, takes thousands of years to disintegrate completely, and we continue to produce more of it.

Now, a California-based business, NDB, says it can resolve both of these issues. They claim to have built a self-powered battery made entirely of radioactive waste that has a life expectancy of 28,000 years, making it ideal for your future electric car or iPhone 1.6 x 104.

Rather than storing energy generated elsewhere, the battery generates its own charge. It is constructed of two kinds of nano-diamonds, which makes it almost crash-proof when used in vehicles or other moving things. Additionally, the business claims that its battery is safe since it emits less radiation than the human body.

NDB has already created a proof of concept and intends to construct its first commercial prototype once its laboratories restart operations after the COVID outbreak(which should be soon).

The nuclear waste from which NDB intends to manufacture its batteries consists of reactor components that have become radioactive as a result of exposure to nuclear power plant fuel rods.

While this is not considered high-grade nuclear waste—that would be spent fuel—it is nonetheless very poisonous, and a nuclear plant generates a lot of it. The International Atomic Energy Agency estimates that the “core of a typical graphite-moderated reactor” may contain up to 2000 tonnes of graphite. (A tonne is equal to one metric tonne, or about 2,205 pounds.)

Carbon-14 is a radioisotope found in graphite. It is the same radioisotope used by archaeologists for carbon dating. It has a half-life of 5,730 years and ultimately decays into nitrogen 14, an anti-neutrino, and a beta decay electron, the charge of which piqued NDB’s curiosity as a possible source of electricity.

NDB cleanses graphite and then converts it to microscopic diamonds. The business claims that by using current technology, they’ve engineered their little carbon-14 diamonds to generate a large quantity of electricity. Diamonds also operate as a semiconductor, absorbing energy and dispersing it via a heat sink.

However, since they are still radioactive, NDB encases the miniature nuclear power plants in other low-cost, non-radioactive carbon-12 diamonds. These glistening lab-created shells provide diamond-hard protection while also containing the carbon-14 diamonds’ radiation.

NDA intends to manufacture batteries in a variety of common and unique sizes, including AA, AAA, 18650, and 2170. Each battery will feature many stacked diamond layers, as well as a tiny circuit board and a supercapacitor for energy collection, storage, and discharge. The ultimate result, the business claims, is a battery that will last an extremely long period.

ELECTRIC CARS AND BATTERIES: HOW WILL THE WORLD PRODUCE ENOUGH?

Reducing the use of scarce metals — and recycling them — will be key to the world’s transition to electric vehicles.

LITHIUM COSTS A LOT OF MONEY—SO WHY AREN’T WE RECYCLING LITHIUM BATTERIES?

According to NDB, a battery may live up to 28,000 years when utilized in a low-power setting, such as a satellite sensor. They predict a usable life of 90 years as a car battery, much longer than anyone vehicle would last—the business believes that one battery could theoretically power one pair of wheels after another. For consumer gadgets like phones and tablets, the firm estimates that a battery will last around nine years.

“Think of it in an iPhone,” NDB’s Neel Naicker tells New Atlas. “With the same size battery, it would charge it five times an hour from zero to full. Imagine that. Imagine a world where you wouldn’t have to charge your battery at all for the day. Now imagine for the week, for the month… How about for decades? That’s what we’re able to do with this technology.”

NDB expects commercialising a low-power version in a few of years, followed by a high-power version in roughly five years. If all goes according to plan, NDB’s technology will represent a significant step forward in terms of delivering low-cost, long-term energy to the world’s electronics and cars.

The company says, “We can start at the nanoscale and go up to power satellites, locomotives.”

Additionally, the business anticipates that its batteries will be comparably priced to existing batteries, including lithium-ion, and maybe much cheaper after they are produced of nuclear waste may even pay the company to take care of their poisonous issue.

The garbage of one enterprise becomes the diamonds of another.