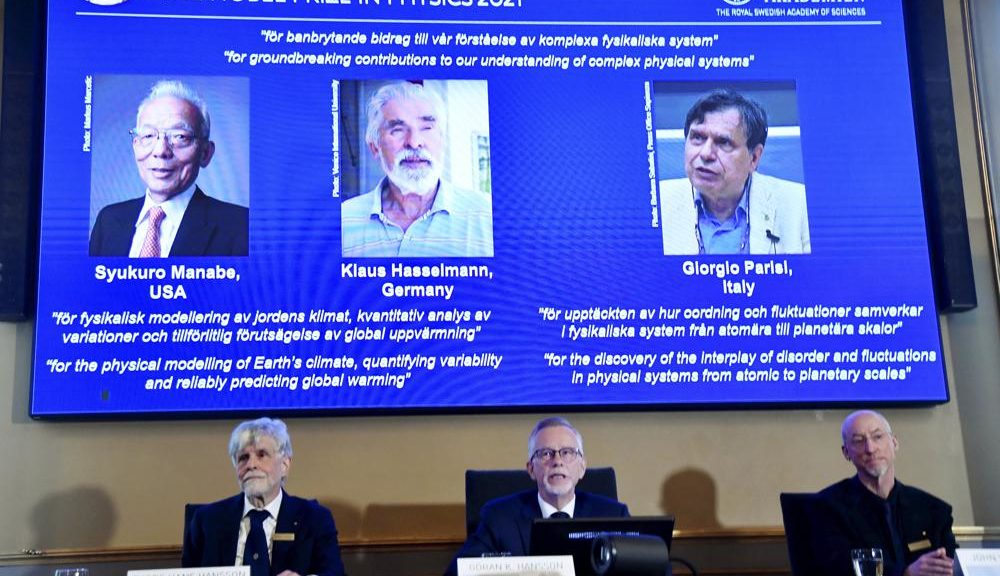 Three scientists won the Nobel Prize in physics Tuesday for work that found order in seeming disorder, helping to explain and predict complex forces of nature, including expanding our understanding of climate change.

Syukuro Manabe, originally from Japan, and Klaus Hasselmann of Germany were cited for their work in developing forecast models of Earth’s climate and “reliably predicting global warming.” The second half of the prize went to Giorgio Parisi of Italy for explaining disorder in physical systems, ranging from those as small as the insides of atoms to the planet-sized.

Hasselmann told The Associated Press that he “would rather have no global warming and no Nobel Prize.”

Manabe said that figuring out the physics behind climate change was “1,000 times” easier than getting the world to do something about it. He said the intricacies of policy and society are far harder to fathom than the complexities of carbon dioxide interacting with the atmosphere, which then changes conditions in the ocean and on the land, which then alters the air again in a constant cycle.

The Nobel Prize in Physics 2021 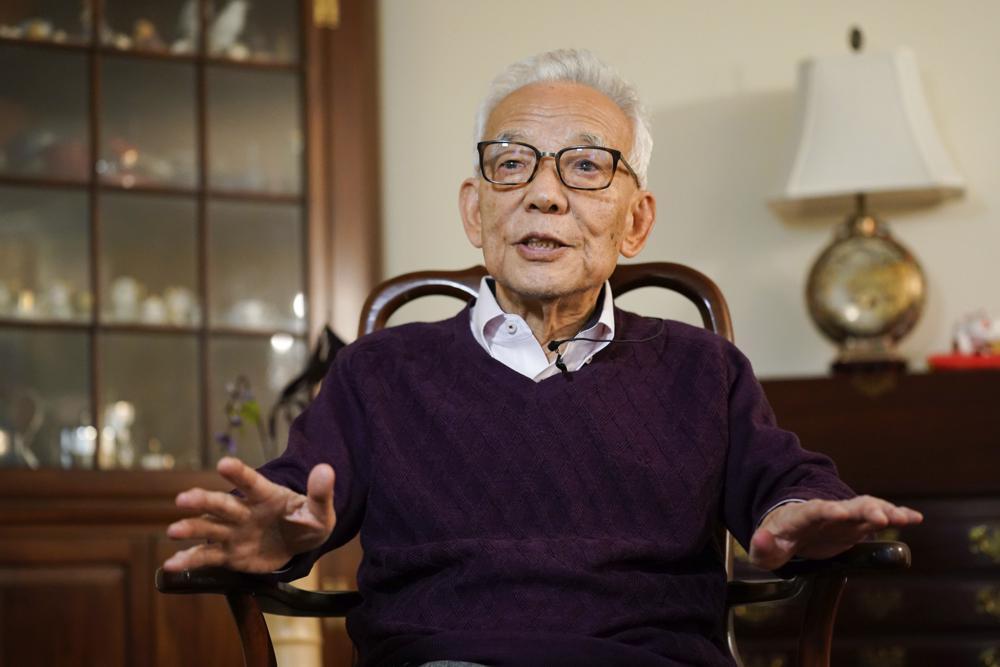 Syukuro Manabe speaks to reporters at his home in Princeton, N.J., Tuesday, Oct. 5, 2021. Manabe and two other scientists have won the Nobel Prize for physics for work that found order in seeming disorder, helping to explain and predict complex forces of nature, including expanding our understanding of climate change. (AP Photo/Seth Wenig)

The prize comes less than four weeks before the start of high-level climate negotiations in Glasgow, Scotland, where world leaders will be asked to ramp up their commitments to curb global warming.

The Nobel-winning scientists used their moment in the limelight to urge action.

“It’s very urgent that we take very strong decisions and move at a very strong pace” in tackling global warming, Parisi said. He made the appeal even though his share of the prize was for work in a different area of physics.

All three scientists work on what are known as “complex systems,” of which climate is just one example. But the prize went to two fields of study that are opposite in many ways, though they share the goal of making sense of what seems random and chaotic so that it can be predicted.

Parisi’s research largely centers around subatomic particles, predicting how they move in seemingly chaotic ways and why, and is somewhat esoteric, while the work by Manabe and Hasselmann is about large-scale global forces that shape our daily lives.

The judges said Manabe, 90, and Hasselmann, 89, “laid the foundation of our knowledge of the Earth’s climate and how human actions influence it.”

Starting in the 1960s, Manabe, now based at Princeton University, created the first climate models that forecast what would happen as carbon dioxide built up in the atmosphere.

Scientists for decades had shown that carbon dioxide traps heat, but Manabe’s work offered specifics. It allowed scientists to eventually show how climate change will worsen and how fast, depending on how much carbon pollution is spewed.

Manabe is such a pioneer that other climate scientists called his 1967 paper with the late Richard Wetherald “the most influential climate paper ever,” said NASA chief climate modeler Gavin Schmidt. Manabe’s Princeton colleague Tom Delworth called Manabe “the Michael Jordan of climate.”

“Suki set the stage for today’s climate science, not just the tool but also how to use it,” said fellow Princeton climate scientist Gabriel Vecchi. “I can’t count the times that I thought I came up with something new, and it’s in one of his papers.”

Manabe’s models from 50 years ago “accurately predicted the warming that actually occurred in the following decades,” said climate scientist Zeke Hausfather of the Breakthrough Institute. Manabe’s work serves “as a warning to us all that we should take their projections of a much warmer future if we keep emitting carbon dioxide quite seriously.”

“I never imagined that this thing I would begin to study has such a huge consequence,” Manabe said at a Princeton news conference. “I was doing it just because of my curiosity.”

About a decade after Manabe’s initial work, Hasselmann, of the Max Planck Institute for Meteorology in Hamburg, Germany, helped explain why climate models can be reliable despite the seemingly chaotic nature of the weather. He also developed ways to look for specific signs of human influence on the climate.

Meanwhile, Parisi, of Sapienza University of Rome, “built a deep physical and mathematical model” that made it possible to understand complex systems in fields as different as mathematics, biology, neuroscience and machine learning.

His work originally focused on so-called spin glass, a type of metal alloy whose behavior long baffled scientists. Parisi, 73, discovered hidden patterns that explained the way it acted, creating theories that could be applied to other fields of research, too.

All three physicists used complex mathematics to explain and predict what seemed like chaotic forces of nature. That is known as modeling.

“Physics-based climate models made it possible to predict the amount and pace of global warming, including some of the consequences like rising seas, increased extreme rainfall events and stronger hurricanes, decades before they could be observed,” said German climate scientist and modeler Stefan Rahmstorf. He called Hasselmann and Manabe pioneers in this field.

When climate scientists with the United Nations’ Intergovernmental Panel on Climate Change and former U.S. Vice President Al Gore won the 2007 Nobel Peace Prize, some who deny global warming dismissed it as a political move. Perhaps anticipating controversy, members of the Swedish Academy of Sciences, which awards the Nobel, emphasized that Tuesday’s was a science prize.

“What we are saying is that the modeling of climate is solidly based on physical theory and well-known physics,” Swedish physicist Thors Hans Hansson said at the announcement.

For a scientist who trades in predictions, Hasselmann said the prize caught him off guard.

“I was quite surprised when they called,” he said. “I mean, this is something I did many years ago.”

But Parisi said: “I knew there was a non-negligible possibility” of winning.

The award comes with a gold medal and 10 million Swedish kronor (over $1.14 million). The money comes from a bequest left by the prize’s creator, Swedish inventor Alfred Nobel, who died in 1895.

On Monday, the Nobel in medicine was awarded to Americans David Julius and Ardem Patapoutian for their discoveries into how the human body perceives temperature and touch.

Over the coming days prizes will be awarded in the fields of chemistry, literature, peace and economics.