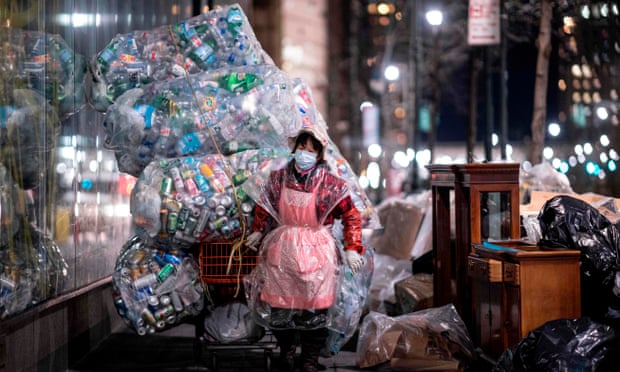 At 42m metric tons of plastic waste a year, the US generates more waste than all EU countries combined

The US is the world’s biggest culprit in generating plastic waste and the country urgently needs a new strategy to curb the vast amount of plastic that ends up in the oceans, a new report submitted to the federal government has found.

The advent of cheap, versatile plastics has created “a global scale deluge of plastic waste seemingly everywhere we look”, the report states, with the US a leading contributor of disposable plastics that ends up entangling and choking marine life, harming ecosystems and bringing harmful pollution up through the food chain.

Plastic waste has increased sharply in the US since 1960, with the country now generating about 42m metric tons of plastic waste a year, amounting to about 130kg of waste for every person in America. This total is more than all European Union member countries combined. The overall amount of municipal waste created in the US is also two to eight times greater than comparable countries around the world, the report found.

Recycling infrastructure has failed to keep pace with the huge growth in American plastic production. Littering, dumping and inefficient waste disposal in landfills has caused up to 2.2m tons of plastic – including everything from plastic bottles and straws to packaging – to “leak” into the environment each year. The total waste may be even greater than this due to data gaps in tracking it.

Much of this plastic ends up, via rivers and streams, in the world’s oceans.

Worldwide, at least 8.8m tons of plastic waste enters the marine environment each year, the equivalent of dumping a garbage truck filled with plastic into the ocean every single minute. If current trends continue, scientists have estimated this total could leap to 53m tons annually by 2030, which is roughly half of the weight of all fish caught from the oceans globally each year.

“Plastic waste is an environmental and social crisis that the US needs to affirmatively address from source to sea,” said Margaret Spring, chief conservation and science officer at Monterey Bay Aquarium. Spring chaired a committee of experts who compiled the congressionally mandated report for the National Academies of Sciences, Engineering, and Medicine.

Spring added: “Plastic waste generated by the US has so many consequences, impacting inland and coastal communities, polluting our rivers, lakes, beaches, bays, and waterways, placing social and economic burdens on vulnerable populations, endangering marine habitats and wildlife and contaminating waters upon which humans depend for food and livelihoods.”

The committee’s report recommends that a new national strategy is required by the end of next year to stem the flow of plastics into the ocean. The strategy, the report states, should aim to slash plastic production, particularly for plastics not reusable or recyclable, help promote alternative materials that can be reused and set better standards for waste collection and capture.

A new eco-friendly plastic made from salmon sperm has been invented by scientists in China.

Two short strands of DNA from the sperm were combined with a chemical from vegetable oil that binds them together. What this creates is a squishy material known as hydrogel.

Broader international and industrial trends will influence any effort to cut plastic pollution. The US, along with many other developed countries, used to outsource its waste problem by shipping plastics to China but these imports were halted by the Chinese in 2018. This has led to an increase in plastic waste sent to other countries, such as Vietnam and Thailand, as well as “recycled” plastic being burned in domestic landfills unable to cope with the sheer volume of waste.

The fossil fuel industry, meanwhile, is considering a huge expansion in plastic production as it sees its primary business squeezed due to concerns over the climate crisis. Plastic polymers can be formed from a feedstock of crude oil and the industry is pinning its hopes on a glut of new plastic to flood the market and therefore waterways, beaches and oceans, in the coming years.

“There is an urgency to the issue because production is increasing, waste generation is increasing and therefore leakage impacts have the potential to increase too,” said Jenna Jambeck, a member of the scientific committee behind the report. 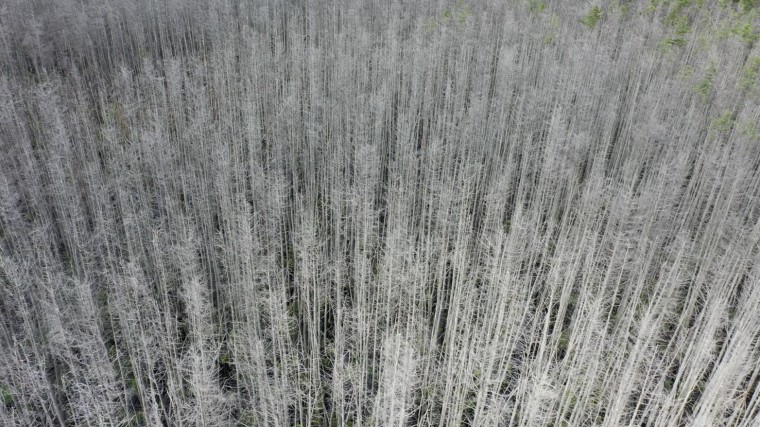 Shawn LaTourette sees a warning on the coast of New Jersey in the miles of Atlantic white cedar trees that have devolved into what researchers call ghost forests.

It’s a term that points to the visceral changes of the landscape — going from lush green to a pale white — and the destruction of the area’s crucial role as a biodome and coastal buffer. These once-thriving forests are a direct result of climate change as the trees are suffocated by saltwater intrusion sparked by sea level rise and an uptick of hurricanes and superstorms.

“If we pay close attention to our environment, we often see that it sends us signals,” LaTourette, the state’s commissioner of environmental protection, said while walking along a ghost forest spanning more than 300 acres in southern New Jersey. “This is a signal about that risk that we all face from saltwater intrusion from storm surge.”

The Atlantic white cedar forests are seen as the first line of defense on New Jersey’s coast. They thrive in freshwater wetlands — swamps so thick that extreme caution and a good pair of wader boots are necessary in order to walk through them. As sea levels rise, these trees are hit first, and the saltwater intrusion is killing them due to their sensitive nature. That water will then move on to inundate farm fields, peoples’ homes, drinking water and businesses.

Along much of the Eastern Seaboard, the once-healthy coastal woodlands are dwindling rapidly — to the extent that if the rate of decline continues, these forested wetlands will reach the “point of no return within the century,” according to  University of Virginia and Duke University researchers focused on studying the ecosystems. Ghost forests are already a problem all along the East Coast and in states along the Gulf Coast, such as Louisiana, Mississippi and Alabama.

Coastal woodlands like these are critical ecosystems in the United States, as they filter pollutants, act as natural barriers and store carbon in the ground. But their positioning on the coast puts them at the vanguard of rising sea levels brought on by the warming atmosphere, therefore worsening some of the effects of climate change.

“To be able to look at these forests and see that this is a direct result from climate change is frightening,” says Kristin Meistrell, a Stewardship Project director for the New Jersey Audubon Society, which focuses on environmental awareness and conservation. Meistrell has worked here for nearly  10 years and recalls walks she used to take on the property when she  started in 2012, surrounded by live Atlantic white cedar trees. Since then, she’s watched the forests completely die off.

The state and environmental groups are scrambling to restore the cedar species in environments that aren’t as immediately threatened by impending storm surges. Foresters and environmental groups are largely focused on restoring forests in new homes, where they won’t be hit by sea level rise. The groups have cleared out large swaths of land typically filled with other hardwoods like maple, to allow remaining healthy cedars to drop seeds naturally with adequate space and access to sunlight. The New Jersey Audubon Society leverages farmers’ and hunters’ attachment to the land, working with them on their private property to develop forest stewardship plans to manage the property for wildlife like these cedars.

“We’re trying to put this forest type back on the landscape,”  State Forester John Sacco said. “When we do that, we’re introducing biodiversity. There are suites of organisms that occur with this forest type that you really don’t find in other forests. It increases biodiversity, helps with resiliency, and it’s part of our natural heritage that we need to keep around and bequeath to the next generation.”

This will take some time. A healthy cedar forest will take decades to develop, and they’re playing catch up after losing more than 80 percent of the woodlands due to logging over the last two centuries.

Growing new trees in safer homes is just one conservation method in their toolbox, as New Jersey and other states also focus on protecting what already exists. The Nature Conservancy works on refuges along the Outer Banks in North Carolina, where it is building oyster reefs and ditch networks to slow down erosion and control water running upstream, and adding more vegetation that can tolerate salt water into the peat soils where the trees typically grow, making root systems more sturdy.

The scientists from University of Virginia and Duke project that coastal forested wetlands will be “drowned and salted out of existence through the North American Coastal Plain within 100 years,” but also note this isn’t the only region globally that’s at risk. Environments in Brazil, Ukraine and Mozambique have similar wetland ecosystems, but don’t currently have research available.

“I think every community, every resident, every business has to ask itself hard questions,” LaTourette said, “about whether it is positioned to confront the ravages of climate change.”