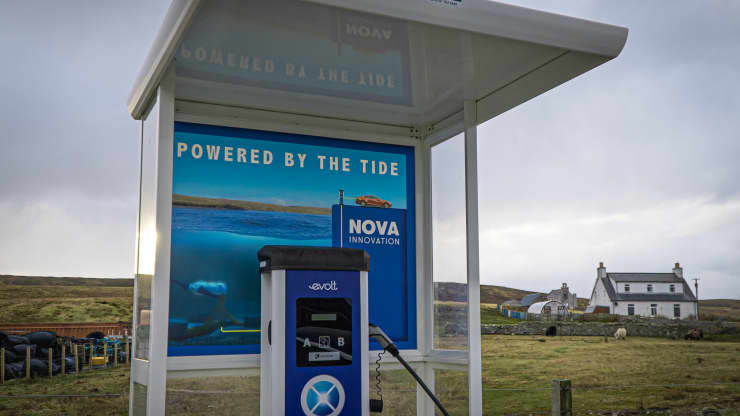 An electric vehicle charging point which uses tidal energy has started operations, providing road users on an island north of mainland Scotland with a new, renewable option for running their cars.

The facility is located on Yell, which is part of Shetland, an archipelago of roughly 100 islands. The charging point gets its electricity from Nova Innovation’s Shetland Tidal Array, a four turbine installation in Bluemull Sound, a strait between Yell and another island called Unst.

In an announcement Monday, Nova Innovation described the project as “the first ever electric vehicle … charge point where drivers can ‘fill up’ directly from a tidal energy source.” A battery storage system has also been deployed to ensure a constant supply for vehicles.

The Scottish government is one of many around the world looking to move away from internal combustion engine vehicles. It wants to phase out the need for new diesel and gasoline vans and cars by the year 2030. Funding for the project on Yell has come from Transport Scotland, the country’s transport agency.

Among those reacting to Monday’s announcement about the project on Yell was Fabrice Leveque, who is head of policy at WWF Scotland.

“It’s great to see tidal technology being used to help decarbonise part of Scotland’s transport sector in the islands,” he said, adding that Scotland was “well placed to continue to lead in developing this technology, which will help to cut climate emissions and create skilled, green jobs.”

“Our islands have an abundance of renewable resources, including wind, tidal and solar, which when harnessed with care, could bring multiple economic and social benefits to remote and rural communities across Scotland,” Leveque went on to state.