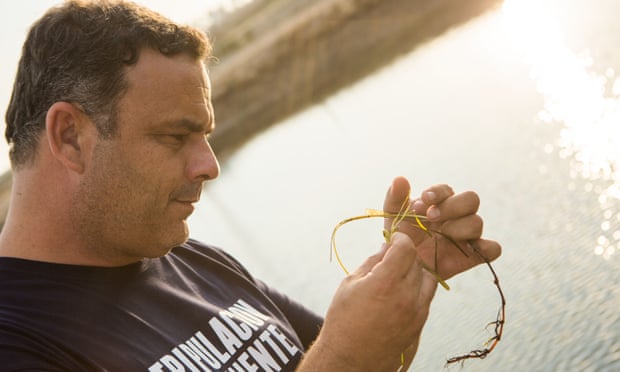 Ángel León made his name serving innovative seafood. But then he discovered something in the seagrass that could transform our understanding of the sea itself – as a vast garden

Growing up in southern Spain, Ángel León paid little attention to the meadows of seagrass that fringed the turquoise waters near his home, their slender blades grazing him as he swam in the Bay of Cádiz.

It was only decades later – as he was fast becoming known as one of the country’s most innovative chefs – that he noticed something he had missed in previous encounters with Zostera marina: a clutch of tiny green grains clinging to the base of the eelgrass.

His culinary instincts, honed over years in the kitchen of his restaurant Aponiente, kicked in. Could this marine grain be edible?

Lab tests hinted at its tremendous potential: gluten-free, high in omega-6 and -9 fatty acids, and contains 50% more protein than rice per grain, according to Aponiente’s research. And all of it growing without freshwater or fertiliser.

The find has set the chef, whose restaurant won its third Michelin star in 2017, on a mission to recast the common eelgrass as a potential superfood, albeit one whose singular lifecycle could have far-reaching consequences. “In a world that is three-quarters water, it could fundamentally transform how we see oceans,” says León. “This could be the beginning of a new concept of understanding the sea as a garden.”

It’s a sweeping statement that would raise eyebrows from anyone else. But León, known across Spain as el Chef del Mar(the chef of the sea), has long pushed the boundaries of seafood, fashioning chorizos out of discarded fish parts and serving sea-grown versions of tomatoes and pears at his restaurant near the Bay of Cádiz.

“When I started Aponiente 12 years ago, my goal was to open a restaurant that served everything that has no value in the sea,” he says. “The first years were awful because nobody understood why I was serving customers produce that nobody wanted.”

Still, he pushed forward with his “cuisine of the unknown seas”. His efforts to bring little-known marine species to the fore were recognised in 2010 with his first Michelin star. By the time the restaurant earned its third star, León had become a fixture on Spain’s gastronomy scene: a trailblazing chef determined to redefine how we treat the sea.

Full story by Ashifa Kassam at The Guardian