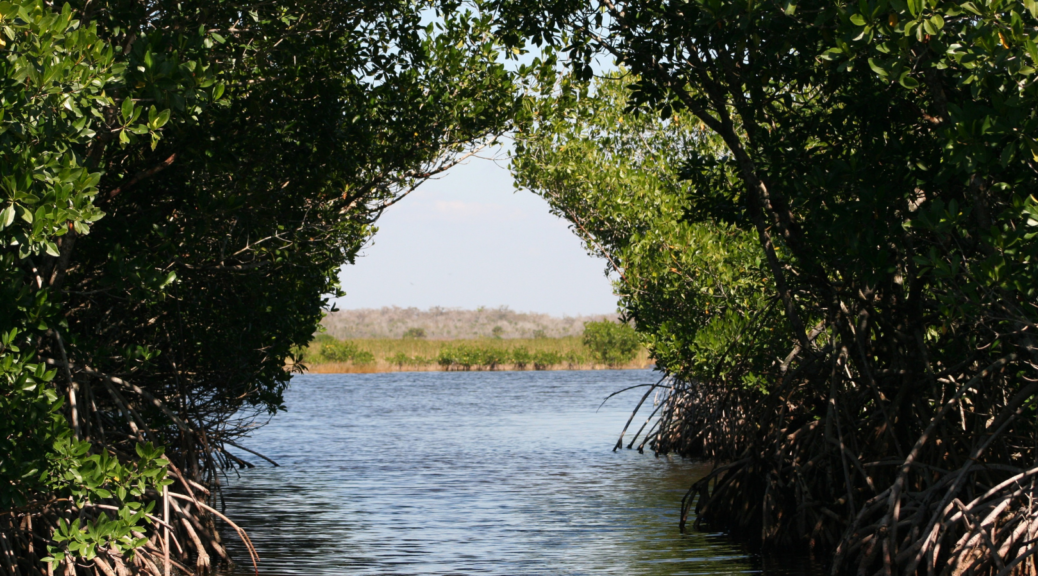 The oriental mangrove (Bruguiera gymnorrhiza), also known as the large-leafed orange mangrove, is a kind of tree that’s usually found in the seaward side of mangrove swamps.

These trees can grow up to 35 m in length—and given their specific name which translates to “naked root” in Greek, these trees are also famous for their exposed “knee roots” which emerge from the ground. The genus Bruguiera is named by French naturalist Jean-Baptiste Lamarck, who named it after his colleague, French zoologist and diplomat Jean Guillaume Bruguière. These beautiful trees can be found across coastal areas stretching from the western Pacific to South Africa.

Unfortunately, these trees are also in danger due to human-induced climate change. Data from a 2010 study showed that mangroves are vanishing at about a rate of 1-2% per year, with a total loss rate reaching 35% over the last twenty (20) years. These losses are often associated with the rise in sea levels, which risk drowning what would otherwise be simple coastal mangrove habitats. These mangrove “swamps” are also home to several species of coastal creatures, most of which are also in danger of losing their homes once the seas encroach upon their shallow waters.

It is thus important for scientists to truly understand how the plant came about, as well as how it survived the way it did for thousands of years. In doing so, experts can fully inform themselves of the strategies and policies involved in saving what’s left of our crucial mangrove habitats. One particular effort of interest was a study published just this year in the journal New Phytologist; a team of researchers, in this case, had fully sequenced the genome of B. gymnorrhiza for the first time.

“Mangroves are an ideal model system for studying the molecular mechanism behind stress tolerance, as they naturally cope with various stress factors,” said Miryeganeh in a statement.

The team performed a survey on the oriental mangroves located within the main island of Okinawa, an area within Japan famous for its coastal scenery. There, the research team noted differences between populations of oriental mangroves situated in different areas along the length of the Okukubi River.

One site was described as being in “brackish” waters, being located upstream; these were coined “riverside” populations of oriental mangroves. Trees on this segment of the river grew up to 7 m high. Meanwhile, plants near the ocean, called the “oceanside” population, grew only up to 2 m tall, according to Saze.

“[The] shorter trees were not unhealthy—they flowered and fruited normally—so we think this modification is adaptive, perhaps allowing the salt-stressed plant to invest more resources into coping with its harsh environment,” Saze followed after mentioning that the oceanside mangroves were exposed to waters with high salinity, given their proximity to the ocean.

Afterwards, the team sequenced the genome of these trees, and found them to contain some 309 million base pairs. They also found some 34,000 genes in the B. gymnorrhiza genome—far larger than those of other mangroves, according to the authors; they attributed this high number to the presence of repeating sequences called transposons in the B. gymnorrhiza DNA.

(This genomic sequencing news comes as the latest in a long line of research efforts to save other species, as is the case with the sequencing of the Atlantic puffin genome. Similar efforts have also been made to save endangered species, such as the recent effort to map out the rhinoceros family tree.)

These transposons, also called “jumping genes,” are “parasitic genes that can ‘jump’ position within the genome, like cut-and-paste or copy-and-paste computer functions,” according to Saze. These genes can build up in the genome of plants like B. gymnorrhiza, accounting for the high number of repetitive sequences.

After analyses were performed on both natural mangroves from the two earlier areas as well as mangroves grown in a lab, the team found that suppressing the appearance of these transposons play a role in managing the stresses induced in the plant by living in a high-salinity environment, such as those living in oceanside habitats. These seaside trees also show an increased activity in genes responsible for the plants’ stress response, including water deprivation.

Saze followed: “This study acts as a foundation, providing new insights into how mangrove trees regulate their genome in response to extreme stresses. […] More research is needed to understand how these changes in gene activity impact molecular processes within the plant cells and tissues, and could one day help scientists create new plant strains that can better cope with stress.”