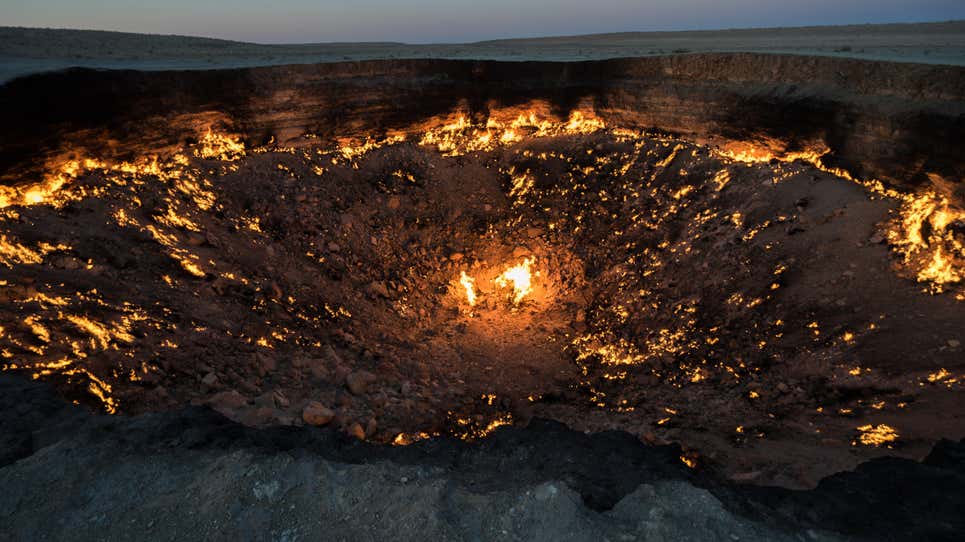 The nation’s president called for authorities to figure out how to extinguish an inferno that has been burning in a natural gas crater for decades.

These past few years have felt like a trial run of living through the end times. Thankfully, 2022 seems like it’s off to a promising start: Turkmenistan plans to close the blazing natural gas crater known as the “Gateway to Hell,” presumably to keep the other three horsemen of the apocalypse from following their buddy Pestilence through it.

President Gurbanguly Berdymukhamedov said in televised remarks on Sunday that authorities will renew efforts to put out a massive fire that has burned for decades in the Karakum Desert, Agence France-Presse reports. As terrifying as it is fascinating, the crater’s become one of Turkmenistan’s most popular tourist attractions in recent years.

Citing environmental and economic concerns, Berdymukhamedov called for officials to “find a solution to extinguish the fire,” according to AFP. The crater, which measures roughly 200 feet (70 meters) wide and at least 65 feet (20 meters) deep and looks like a fiery portal to another world, “negatively affects both the environment and the health of the people living nearby,” he said.

‘EYE OF FIRE’ THAT ERUPTED IN GULF OF MEXICO IS UNDER CONTROL, SAYS MEXICO-OWNED OIL COMPANY

“We are losing valuable natural resources for which we could get significant profits and use them for improving the well-being of our people,” he said via AFP.

This isn’t the first time Berdymukhamedov has tried to close the gates of hell. He ordered experts to extinguish the flames in 2010, but their efforts were unsuccessful.

Commonly known as the “Gateway to Hell,” the “Mouth of Hell,” and other colorfully apocalyptic nicknames, the Darvaza gas crater has remained ablaze in the Central Asian nation since 1971. Details on the crater’s origin remain a bit of a mystery, but it’s most commonly attributed to a Soviet drilling accident wherein the ground beneath a drilling rig gave way after it hit a gas cavern. The story goes that Soviet scientists, having underestimating the amount of fuel beneath their feet, lit the sinkhole on fire to burn off emerging noxious gases and prevent the dangerous fumes from spreading. The crew expected it to burn out in a matter of weeks, but more than 50 years later, the blaze is still going strong.