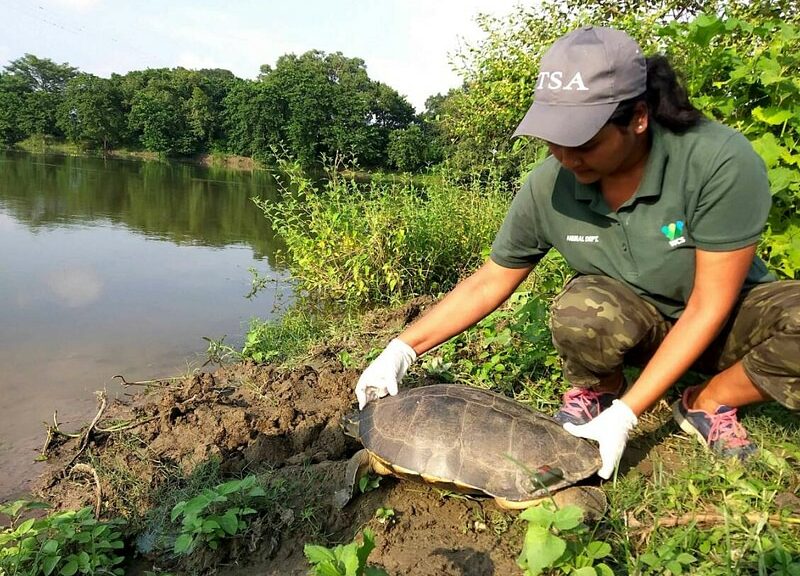 One of India’s most hardworking conservationists, Arunima Singh has won the NatWest Group Earth Heroes Save the Species Award 2021 for her exemplary efforts towards saving turtles, tortoises, crocodilians and Gangetic dolphins.

In late October this year, Arunima Singh was conferred with the NatWest Group Earth Heroes Save the Species Award 2021 for her exemplary grassroots conservation efforts to safeguard north Indian freshwater turtles and tortoises, crocodilians and Gangetic river dolphins.

Since 2013, Arunima, a resident of Lucknow and staff of the Turtle Survival Alliance (TSA) – India, has used various initiatives to further the cause of conservation — from educating over 50,000 children from rural and urban communities about conserving freshwater reptiles through formal and informal means in Uttar Pradesh, to assisting with rescue, rehabilitation and release of over 28,000 turtles, 25 Gangetic dolphins, 6 marsh crocodiles and 4 gharials in the last 8 years.

Over the years, Arunima’s efforts have led to many changes.

Through the joint Uttar Pradesh Forest Department and TSA India Program for Aquatic Biology, she was instrumental in establishing assurance colonies for more than 10 species of turtles and most of which are critically endangered. Her efforts further bolstered rear and release programmes for certain imperiled turtle species such as Indian Narrow-headed Softshell Turtle (Chitra indica).

Moreover she helped sensitise and built capacities of hundreds of frontline forest department staff and veterinarians. Her research has facilitated understanding the breeding of a few elusive species. If this wasn’t enough, she has also been on the frontline of operationalising on-site care for tens of thousands of turtles rescued from clandestine trade.

As Dr Shailendra Singh, the Director of TSA India Program, said upon receiving news of the award, “Arunima has been one of the most remarkable conservationists in the country, single-handedly attending to several wildlife distress calls. Her research on elusive freshwater turtle species, the Crowned River Turtle (Hardella thurjii), has provided watershed moments for scientific turtle conservation communities and aids our organization in the development of species-specific conservation strategies.”

But it was a visit to the Kukrail Gharial Rehabilitation Center (KGRC) at the start of her Master’s course in Life Science from Lucknow University in 2010 that set her on the path of conservation.

“Dr. Shailendra gave me an insight into how I could be involved with wildlife conservation in the long term and gave me opportunities to obtain a greater understanding of it in areas like the Chambal Valley. In 2011, I began doing some volunteering work with the TSA and enrolled in a small awareness and educational programme at Lucknow University for wildlife conservation. Upon completing my Master’s degree, I got involved full time in conservation work of endangered freshwater turtles, tortoises and other aquatic species. At present, I’m also pursuing a PhD focussing on freshwater turtles,” she says.