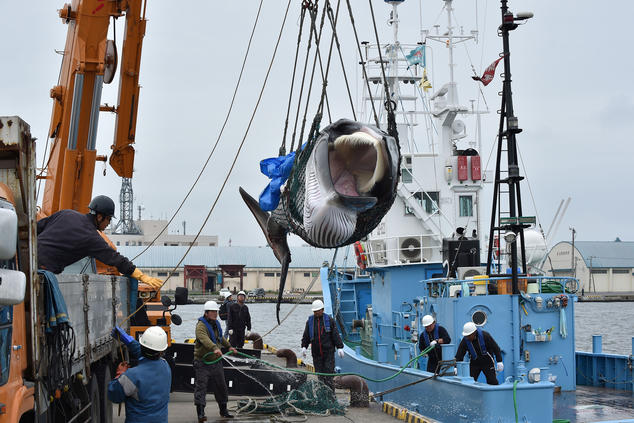 The nation’s departure from the International Whaling Commission was followed immediately by the slaughter of two minke whales.

On July 1, the day after Japan officially withdrew from the International Whaling Commission, its fishing fleet slaughtered two minke whales off the island nation’s northern coast. This is the first time Japan has hunted whales commercially since the IWC declared a moratorium on the practice 31 years ago.

The choice was made despite the fact that demand for whale meat in Japan has plummeted. In 1962, the country’s whale meat production peaked at 226,000 tons, but by 2017, that number had dropped to just 3,000 tons, or slightly more than 1 percent of the industry’s record. Japan also imports whale meat from whaling nations like Iceland and Norway, despite the lack of domestic demand. As of April, 3,500 tons of whale meat were sitting in freezers waiting for someone to buy it.

And the decision is not about creating jobs, either. Japan’s whaling industry employs just 300 people and is heavily subsidized by the government, which kicks in nearly $50 million each year to keep whalers afloat. At the same time, the country’s whale-watching industry doubled in size between 1998 and 2015, with one marine mammal outfit in Okinawa reporting 18,000 visitors between January and March of this year.

When asked what he thought about Japan’s decision to exit the IWC, Ari Friedlaender, a marine ecologist at the University of California, Santa Cruz, had one word: “Bad.”

“I’ve been involved in the IWC and whale research for a long time, and I just don’t personally have a reason to think that commercial whaling needs to exist,” says Friedlaender.

While two of the species Japan plans to target—minke and Bryde’s whales—aren’t in immediate danger of extinction, a third type, the sei whale, is considered endangered by the International Union for Conservation of Nature.