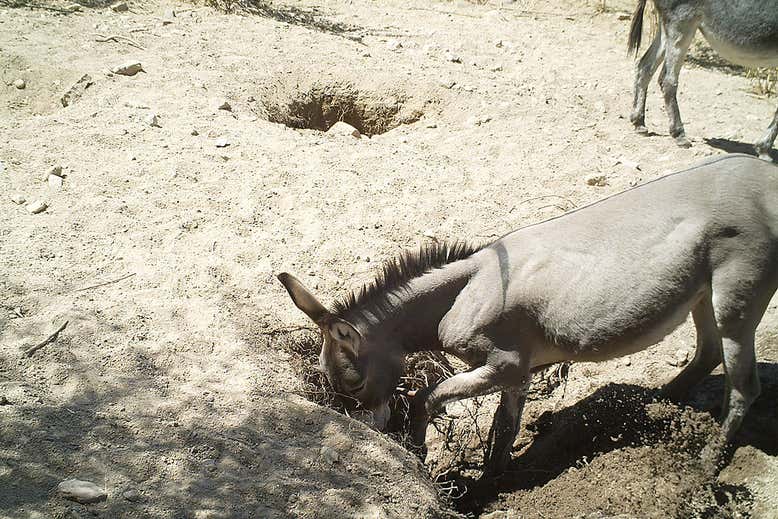 Feral horses and donkeys in the Sonoran desert in North America dig their own wells, inadvertently providing a water source for other animals and increasing biodiversity in the area.

Erick Lundgren at Aarhus University in Denmark and his colleagues monitored four separate streams in part of the Sonoran desert in Arizona. The streams are usually supplied by groundwater but dry up in the summer. The team surveyed each stream every few weeks over the summers of 2015, 2016 and 2018, and found that horses and donkeys in the area dig wells there to access the groundwater.

“It’s a very hot, dry desert and you’ll get these pretty magical spots where suddenly there is surface water,” says Lundgren.

The horses and donkeys dig wells up to 2 metres in depth to access water. The team saw 59 other vertebrate species at the wells, 57 of which were recorded drinking from the wells. On average, species richness was 51 per cent higher at these wells than observed in nearby dry areas during the same time periods.

“These resources are in fact used by all other animals – there was a cacophony of organisms,” says Lundgren. This included squirrels, mule deer, quails and even a black bear at one point, he says.

The wells also function as germination points for plants, especially riparian pioneer trees. These horses and donkeys provide a useful source of water for a range of species, which is especially important given that deserts are becoming hotter and drier as a result of climate change.

Despite this find, large herbivores are often seen as threats to conservation and biodiversity. “Some research from the western United States has shown that feral horses exclude native wildlife from water sources in deserts,” says Lucas Hall at California State University, Bakersfield. “The benefit they may provide by creating new water sources will likely be offset by their high populations and exclusionary effects on other wildlife.”