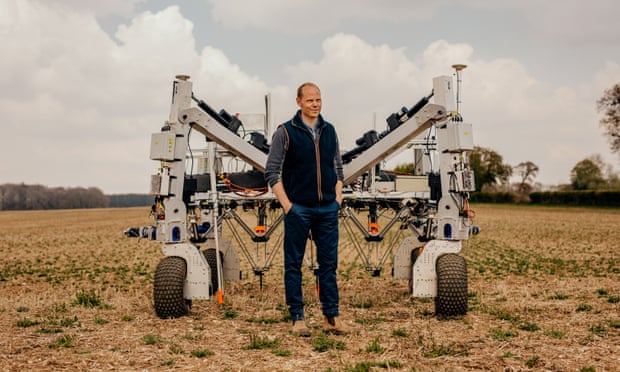 In a sunny field in Hampshire, a killer robot is on the prowl. Once its artificial intelligence engine has locked on to its target, a black electrode descends and delivers an 8,000-volt blast. A crackle, a puff of smoke, and the target is dead – a weed, boiled alive from the inside.

It is part of a fourth agricultural revolution, its makers say, bringing automation and big data into farming to produce more while harming the environment less. Pressure to cut pesticide use and increasing resistance to the chemicals meant killing weeds was the top priority for the farmers advising the robot company.

The killer robot, called Dick, is the world’s first to target individual weeds in arable crops and, on its first public demonstration, it is destroying broad-leaved weeds identified using pattern recognition. A scout robot, called Tom, has already scanned the field in detail and passed the data to an AI engine called Wilma to plot the targets. Dick’s onboard AI then ensures a bullseye hit.

Dick is powered by batteries from a Tesla and will begin field trials in October. For safety, the robots have laser sensors to detect obstructions and shut down into a hibernation mode if they encounter something unexpected. They also have big red off buttons on their sides.

Tom, the scout robot, is ready for commercial use, moving at a fast walking pace and delivering 6 terabytes of data a day to farmers, who can use the data to pinpoint problems with their growing crops. LED lights mean the robots could work at night too.

“There have been times over the last four years when we thought this day would never actually happen,” said Ben Scott-Robinson, the CEO of the Small Robot Company (SRC). “It turns out that building robots that work in fields to any level of reliability or accuracy is tough.”

Scott-Robinson said his robots were part of a fourth industrial revolution, using technology to focus on accuracy, efficiency, and sustainability. “The way farming needs to be done is changing. It isn’t just about producing large quantities of food, it’s also about caring for what happens in the field.”

The robot does not need to kill every weed, he said, as some have benefits. Speedwell is enjoyed by bees and clover fixes nitrogen in the soil, for example. “Neither is a threat to crop growth, so we leave them alone,” he said.

“We are under constant pressure to use less pesticide but if we can’t do that we need something else,” said Tom Jewers, who has a 390-hectare (960-acre) arable farm in Suffolk and is advising SRC, which used his fields to train the robots. “This is as big [a change] as tractors were to horses.”

Hundreds of companies are developing systems to tend to plants individually, such as Blue River and Bilberry, with the aim of cutting pesticides and fertiliser use. Robots are already used to weed in horticulture, deploying a hoe around vegetables and fruit plants. But these cannot be used on continuous rows of wheat and barley.

Full story by Damian Carrington at The Guardian