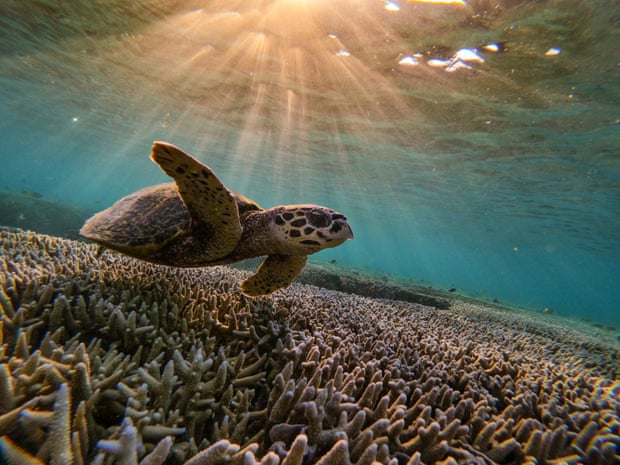 This weekend, conservationists will put the final touches to a giant artificial reef they are assembling at London zoo. Samples of the planet’s most spectacular corals – vivid green branching coral, yellow scroll, blue ridge and many more species – will be added to the giant tank along with fish that thrive in their presence: blue tang, clownfish and many others.

The scene will then be set for Monday’s opening of the zoo’s new gallery, Tiny Giants, which is dedicated to the minuscule invertebrate creatures that sustain life across the planet. The coral reef tank and its seven-metre wide window will form the core of the exhibition.

The aim of the new gallery goes beyond merely demonstrating the wonder and glory of coral reefs, however. It will also showcase the research that is now being carried out in a bid to halt the destruction of the world’s reefs as global heating warms the oceans and bleaches and destroys their coral.

“Coral reefs are the most diverse ecosystems on Earth and we want to show people how wonderful they are,” said Paul Pearce-Kelly, senior curator of invertebrates and fish at the Zoological Society of London.

“However, we also want to highlight the research and conservation efforts that are now being carried out to try to save them from the threat of global warming. We want the public to see what is being done to try to save these wonders.”

Corals are tiny animals, known as polyps, that have mouths surrounded by tentacles for capturing food. These polyps are clear but get their brilliant colour from algae that live within them. The algae get protection while their photosynthesising of sun’s rays provides nutrients for the polyps.

This comfortable symbiotic relationship has led to the growth of coral reefs that cover 0.1% of the planet’s ocean bed while providing homes for more than 25% of marine species, including fish, molluscs, sponges and shellfish. As a result, they are sometimes described as the “rainforests of the sea”, though the comparison is disparaged by some naturalists, including David Attenborough.

“People say you cannot beat the rainforest,” Attenborough has stated. “But that is simply not true. You go there and the first thing you think is: where the hell are the birds? Where are the animals? They are hiding in the trees, of course. No, if you want beauty and wildlife, you want a coral reef. Put on a mask and stick your head under the water. The sight is mindblowing.”

Full story by Robin McKie at The Guardian