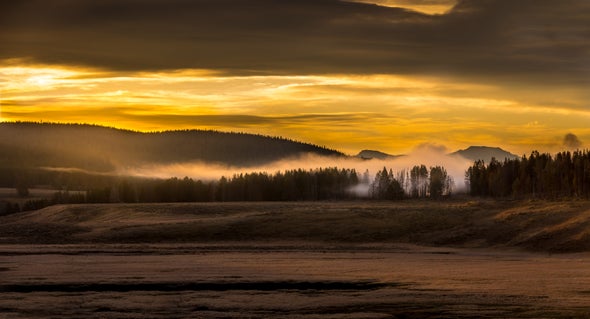 Summers in the nation’s first and oldest national park are rapidly heating up, new research finds. For the last two decades, Yellowstone National Park has been warming at its most intense rates in at least 1,250 years.

The study, published in the journal Geophysical Research Letters, used data from tree rings to reconstruct more than a millennium of summer temperatures in the Yellowstone region. Tree rings can provide a variety of information about the climate and weather conditions a tree has experienced over the course of its lifetime.

Led by Karen Heeter at the University of Idaho in Moscow, the researchers collected samples from both living and fossilized Engelmann spruce trees in northwest Wyoming, including trees inside Yellowstone National Park and in nearby Shoshone National Forest. Some samples were more than a thousand years old.

The samples helped scientists construct a timeline of the Yellowstone climate, focusing on August temperatures — the hottest time of the year.

They used a special kind of analysis known as “blue intensity,” a relatively new method that measures the amount of blue light reflected from tree rings. This method helps scientists determine the density of the tree rings, a characteristic that’s closely correlated with the summer temperatures the tree experienced while it was alive.

It’s one of the few tree-ring records in North America dating back so far, the scientists say. Most others extend back only a few hundred years.

Yellowstone has had its ups and downs over the past millennium, they found, including periods of both warming and cooling. But recent human-caused climate change has taken an unprecedented toll. The region’s most intense warming has occurred since 2000.