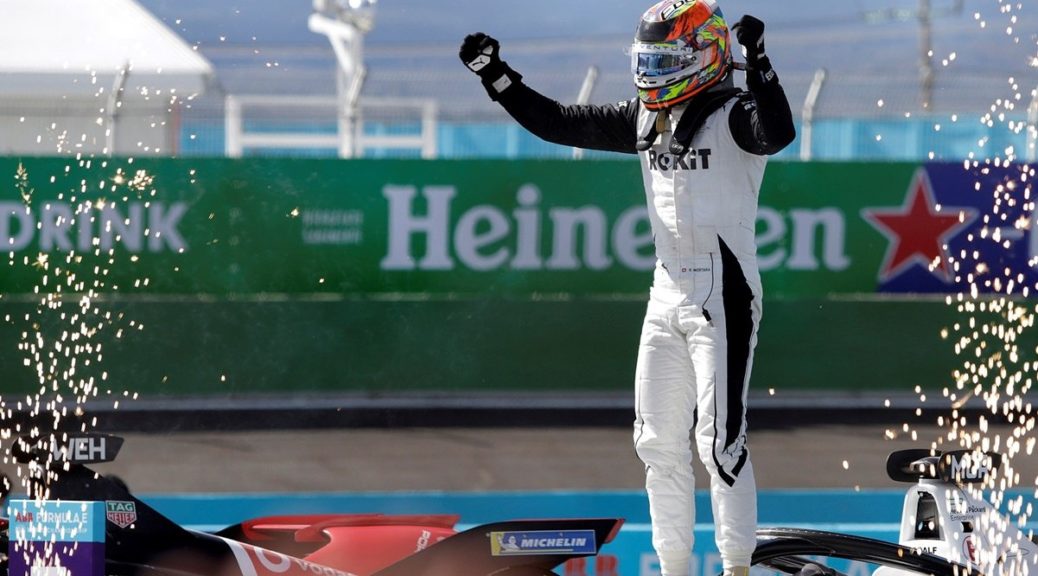 After a perfectly played race in Puebla, Edoardo Mortara (ROKiT Venturi Racing) stormed to his second ABB FIA Formula E World Championship win, leaping to the top of the Drivers’ standings in the process after a masterful performance in Mexico.

For the second time in his Formula E career, Edoardo Mortara lifted the winner’s trophy for ROKiT Venturi Racing after mastering the strategy with the challenging ATTACK MODE activation zone to control the race from the lead.

Pascal Wehrlein rebounded from Saturday to claim second position. The TAG Heuer Porsche driver pushing Mortara hard until a slight mistake allowed a gap to open up to the leader.

“What a weekend for us – 40 points in two days! This win today is fantastic,”  said Mortara. “Pascal was very strong today, it was hard to keep him behind. We used more energy in the first part of the race to build a gap and in the latter I had to save more energy.

“I am glad to be here, the car was very competitive, the team put on a great strategy. We try to maximise our potential every time we race, and we do our very best all the time. I am happy with our season so far.”

The victory sees Mortara jump to the top of the Drivers’ standings from eighth in the table, the Swiss-Italian now sitting 10 points clear of Robin Frijns (Envision Virgin Racing).

But with another unpredictable double-header, this can all change when all-electric racing returns to the streets of New York City on July 10 & 11.

Oliver Rowland leaped off the line to dive into Turn 1 in the lead. It was all action behind the Nissan, with Edoardo Mortara out-braking Pascal Wehrlein around the outside and Jake Dennis (BMW i Andretti Motorsport) also mugging Jean-Eric Vergne into the first bend.

Punching through the air in front, Rowland gradually started to build out a gap, the Brit unfazed as he kicked up dirt after running slightly wide at the tricky Turn 7.

Climbing up from 14th, Alexander Sims (Mahindra Racing) rounded out an action-packed second lap by running past both Sam Bird (Jaguar Racing) and Tom Blomqvist (NIO 333).

With the ATTACK MODE zone open, Rowland took an early move to claim his extra 35kW of power on lap four and dropping back to fourth. The British driver immediately took advantage of the extra boost of speed to squeeze past Dennis into Turn 1.

As always, ATTACK MODE proved to play an important role in shaking up the lead group. Wehrlein dived to activate the first of his two power boosts and Rowland immediately followed the German. Tactically shadowing the Porsche driver’s moves to take his second and final ATTACK MODE in quick succession.

Further down the field, there was drama on lap eight as early season leader Nyck de Vries (Mercedes-EQ) was left limping back to the pits with a tyre puncture following a collision with Lucas di Grassi. The Audi Sport ABT Schaeffler driver punting the rear left of the Dutchman’s Silver Arrow after immediately challenging on the exit of the ATTACK MODE activation zone. The Brazilian picked up a drive-through penalty for the incident.

Turn 7 saw a hard scrap between Sebastien Buemi and Bird running side-by-side into the right hander, with Di Grassi behind running out of room ploughing into the back of the Jaguar and forcing it into the side of Buemi’s Nissan.

The battle for second started to get hot under the beating sun, with Wehrlein on a charge and climbing up to the rear diffuser of Rowland. A mistake from the Nissan driver clipping the wall in the middle complex allowed Wehrlein to capitalise and move past Rowland.

Clear of Rowland, Wehrlein set his sights on Mortara in the lead. The German driving with the bit between his teeth, lapping nearly a second quicker than the Swiss-Italian.

Rounding out a difficult weekend in Mexico after a DNF in Round 8, two-time champion and Rome race winner, Jean-Eric Vergne spun out of fifth position, losing two places in the process and then a few corners later Maximilian Guenther (BMW i Andretti Motorsport) picked off the Frenchman for seventh.

After a mistake running just slightly wide at Turn 7, Wehrlein handed a strong advantage to Mortara heading into the final laps with the Venturi driver making the most and picking up a gap on the German.

Antonio Felix da Costa made it a tough day at the office for the DS TECHEETAH squad. The reigning champion was another victim of the challenging Turn 7, with the Monaco E-Prix victor slamming into the wall and crawling off the track and out of the race.

Behind the leaders, Cassidy was pushing hard to chase down Rowland for the final spot on the podium. Rowland was unable to hold off the rookie, as the New Zealander snatched third from the Yorkshirman with just over a minute left on the clock.

In a perfectly played 45 minutes plus one lap, Mortara crossed the line to take the second win of his Formula E career. After a strong drive Wehrlein rebounded from Round 8 to end second with rookie Cassidy rounding out the podium with a debut rostrum finish.