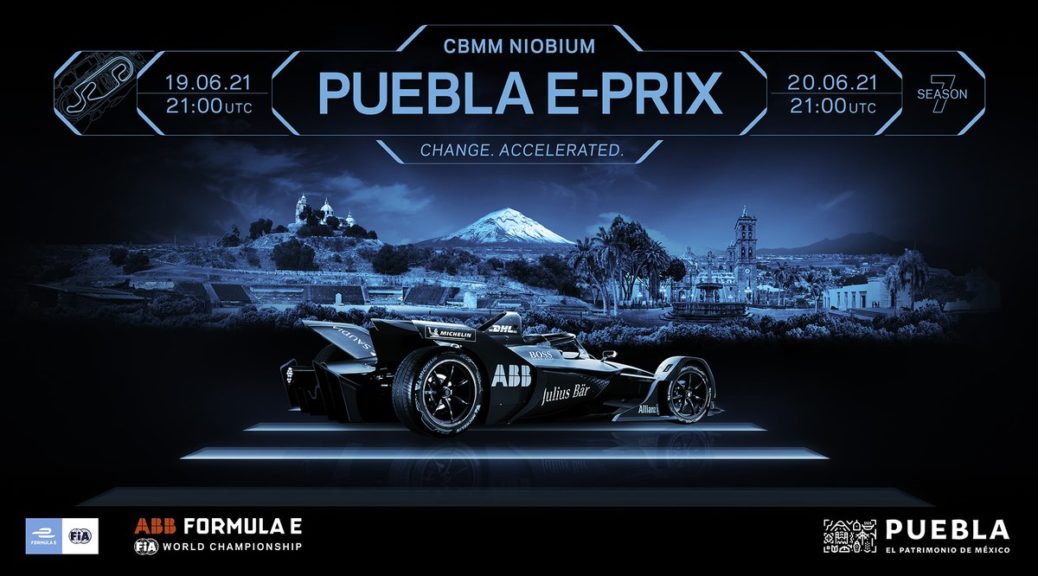 The ABB FIA Formula E World Championship turns to Mexico and the vibrancy of Puebla this weekend (June 19 & 20), for Rounds 8 & 9 of Season 7. The championship’s poised on a knife-edge, waiting to erupt, with any one of 10 drivers in with a real say in the battle for the first Formula E World Drivers’ Championship crown. Who’ll steal a march at the Autodromo Miguel E. Abed?

Formula E is set for a sixth trip to Mexico this weekend with a maiden visit to Puebla’s Autodromo Miguel E. Abed – a circuit twisting in the shadows of the Popocatepetl volcano, and uncharted territory for Formula E’s grid of 24 world-class drivers.

As Season 7 heads towards its half-way point, with seven rounds and six different race winners in the books, there’s just 16 points – less than is on offer for a single victory – between Drivers’ standings leader Robin Frijns (Envision Virgin Racing) and double champion Jean-Eric Vergne (DS TECHEETAH) in seventh spot.

In another septuple, there’s only seven points splitting Mercedes-EQ at the top of the Teams’ table and reigning champions DS TECHEETAH in third. Envision Virgin Racing aren’t far back in fourth, either, and with Frijns’ form, and teammate Cassidy scoring in two of his last three outings, there’s time yet for the British squad to stake their claim among the manufacturers.

Any one of the top 10 drivers in the standings are in with a realistic shout of taking the Drivers’ crown in Formula E’s first campaign as an FIA World Championship, and with eight rounds of the season still to come, there’s plenty of time for more to join the party as consistency at the top has so far proven hard to come by.

Frijns has been strong enough to grasp the advantage so far – taking the fight to the manufacturer might around him – but even he has three non-scores to his name and is yet to reach the top step of the podium in 2020/21.

Mercedes-EQ’s Nyck de Vries topped the pile heading into Round 7 in Monaco after a measured victory in the DHL Valencia E-Prix Round 5 and that storming opening-round drive in Diriyah. Zero points following a costly qualifying error, as well as a retirement last time out in Monte Carlo for the Dutchman means he now finds himself second, five points shy of his compatriot.

FANBOOST: Have your say on the outcome of the Puebla E-Prix! Vote now!

Mitch Evans (Jaguar Racing), is sitting pretty in third a further three points back. The Kiwi will fancy his chances of a repeat of his 2020 Mexico City E-Prix victory, and has all the tools at his disposal to pull it off. Both Evans and teammate Sam Bird sit inside the top six in the Drivers’ running with plenty of silverware to show for it.

Reigning champion Antonio Felix da Costa (DS TECHEETAH) heads to Puebla fourth in the standings, fresh off the back of victory in one of the most memorable E-Prix of all time in Monaco – the Portuguese stealing the lead from Evans on the final lap to take to the top step of the podium. He’s been a runner-up in the last two outings in Mexico, and has some tricks of the trade to lean on from his manager Tiago Monteiro, who raced at Puebla back in 2009. It was at this point in the 2019/20 campaign where he really ignited his championship charge, too.

Bird, Stoffel Vandoorne (Mercedes-EQ) and Vergne sit fifth, sixth and seventh in the table and have all won in Season 7, while Rene Rast (Audi Sport ABT Schaeffler), Oliver Rowland (Nissan e.dams) and BMW i Andretti Motorsport‘s Jake Dennis – himself a winner in Valencia – will need to pull something out of the bag this weekend if they’re to fire themselves in-amongst the title favourites.

As experienced and seasoned as Formula E’s drivers are across motorsport’s top disciplines, none have raced on the 2.98km, 15-turn permanent Autodromo Miguel E. Abed race-track, situated on a plateau in the shadow of the imposing Popocatepetl volcano, some 2,175 metres above sea level.

The track comprises a technical infield section housed within the high-speed oval which is used by the likes of NASCAR. The string of 15 corners that make up that infield has been tweaked by Formula E’s sporting team to throw the teams and drivers an added curveball – most notably in the shape of an extended Turn 8 ATTACK MODE activation zone.

SYNC: Don’t miss a minute of the 2020/21 campaign, sync your calendar for all the latest

With a three to four second penalty over rounding Turn 8’s usual apex, the activation loop will give drivers, engineers and strategists a headache as to when the best time to jump for that 35kW jolt – taken twice during races by each driver – will be.

There’ll be banking to deal with, too, as the circuit rounds the outer oval through the long, sweeping final Turn 15. The slingshot down the pit straight will be crucial with the tight right hander at Turn 1 likely to prove a hotspot for overtaking. It’s bumpy and there are walls for drivers to think about. It’s not a street circuit, though this is a track that more closely resembles one, with a bumpy, uneven surface and amends in the shape of imposing walls for drivers to navigate.

READ MORE: Why is energy management so key in Formula E?

“We’ve made the circuit much more like Berlin than Valencia, and we’ve really managed to instill Formula E’s spirit into the layout,” said Formula E Sporting Director Fred Espinos. “It’ll be very interesting to see how teams and drivers deal with the ATTACK MODE loop which makes for a longer lap, as when we looked at Puebla’s infield with saw we’d have the opportunity to do something different given the layouts available.”

What are the drivers expecting? Heat, energy management challenges, a tough track surface to get to grips with and the mental challenge of another double-header race weekend. There’s been plenty of time in the simulator during the summer break following the Monaco E-Prix to get themselves up to speed.

Most of all, though, the drivers are looking forward to welcoming thousands of fans back into the grandstands. We know from five visits to Mexico City just how passionate and knowledgable Mexican fans are. They’re “special”, says double champion Vergne (DS TECHEETAH)

“I love Mexico and I hope we have as much fun as we have had in previous years,” says the Frenchman, who sits seventh in the Drivers’ standings. “The Mexican crowd make it special. So far, we’ve races in cold conditions and has not really been good to us. So hopefully, the car will perform better in the warm.”

READ MORE: What the drivers are expecting from Puebla

“We honestly missed the fans,” adds de Vries. “I think we really need them for the ambience and the atmosphere; they give the punch to the event. Any sport in the end is about showing fans the action and we really hope to share it with them again.”

“Formula E has achieved a really interesting compromise in Season 7, with nice tracks, double headers and the best race weekends we can have,” says 2016/17 champion Lucas di Grassi (Audi Sport ABT Schaeffler).

“We’ve only raced in cooler climates so far. So, it’s a different setup than when we race in a very hot environment. We have to manage energy, and we have to manage the temperature of the battery – you have another constraint that you have to take into account, increasing the complexity of the whole event.”

History tells us that Mexico is a place that has always flaunted  exactlywhat Formula E is all about since the series’ first visit back in 2015/16. In five previous trips, the country’s ultra-passionate fans have been treated to peak Formula E; last gasp drama, the ultimate pace vs usable energy tightrope, super-competitive racing and complete unpredictability.

The climax of the 2019 Mexico City E-Prix encapsulated this perfectly, with di Grassi slicing by Pascal Wehrlein’s Mahindra as the German ran out of usable energy heading toward the finishing line – the Brazilian capitalising at the very last; right at the chequered flag.

Mexico’s climate legislation has targeted emissions cuts of 50 per cent by 2050 and 35 per cent renewables by 2024, with the country’s vulnerability to the effects of climate change like extreme weather driving its action to cut emissions alongside strong public opinion – some 89 per cent of respondents said in 2020 they expect the government to make environmental protection a priority in the COVID-19 recovery.

BiomiTech’s BioUrban 2.0 is as a match for 368 real ones, and was installed in the city with local government sponsorship.

Coverage of Rounds 8 & 9 of the 2020/21 ABB FIA Formula E World Championship, the CBMM Niobium Puebla E-Prix, gets underway with Free Practice 1 from 15:00 CEST on Saturday June 19. Find out where to watch and sync your calendar for all the latest updates and session times.