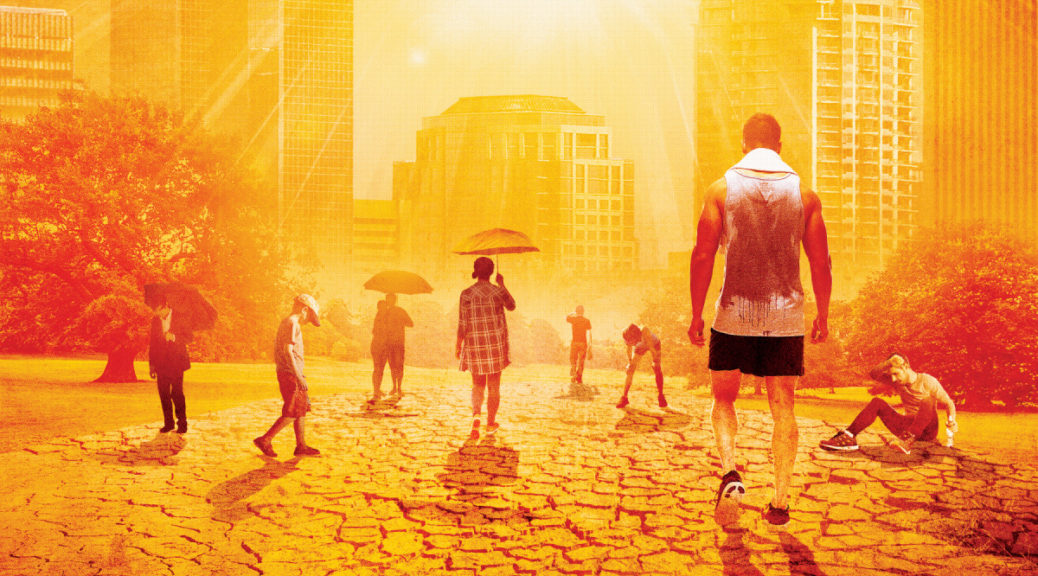 Humans have never lived on a planet this hot, and we’re totally unprepared for what’s to come

On a scorching day in downtown Phoenix, when the temperature soars to 115°F or higher, heat becomes a lethal force. Sunshine assaults you, forcing you to seek cover. The air feels solid, a hazy, ozone-soaked curtain of heat. You feel it radiating up from the parking lot through your shoes. Metal bus stops become convection ovens. Flights may be delayed at Sky Harbor International Airport because the planes can’t get enough lift in the thin, hot air. At City Hall, where the entrance to the building is emblazoned with a giant metallic emblem of the sun, workers eat lunch in the lobby rather than trek through the heat to nearby restaurants. On the outskirts of the city, power lines sag and buzz, overloaded with electrons as the demand for air conditioning soars and the entire grid is pushed to the limit. In an Arizona heat wave, electricity is not a convenience, it is a tool for survival.

As the mercury rises, people die. The homeless cook to death on hot sidewalks. Older folks, their bodies unable to cope with the metabolic stress of extreme heat, suffer heart attacks and strokes. Hikers collapse from dehydration. As the climate warms, heat waves are growing longer, hotter, and more frequent. Since the 1960s, the average number of annual heat waves in 50 major American cities has tripled. They are also becoming more deadly. Last year, there were 181 heat-related deaths in Arizona’s Maricopa County, nearly three times the number from four years earlier. According to the Centers for Disease Control and Prevention, between 2004 and 2017, about a quarter of all weather-related deaths were caused by excessive heat, far more than other natural disasters such as hurricanes and tornadoes.

Still, the multiplying risks of extreme heat are just beginning to be understood, even in places like Phoenix, one of the hottest big cities in America. To Mikhail Chester, the director of the Metis Center for Infrastructure and Sustainable Engineering at Arizona State University, the risk of a heat-driven catastrophe increases every year. “What will the Hurricane Katrina of extreme heat look like?” he wonders aloud as we sit in a cafe near the ASU campus. Katrina, which hit New Orleans in 2005, resulting in nearly 2,000 deaths and more than $100 billion in economic damage, demonstrated just how unprepared a city can be for extreme climate events.

“Hurricane Katrina caused a cascading failure of urban infrastructure in New Orleans that no one really predicted,” Chester explains. “Levees broke. People were stranded. Rescue operations failed. Extreme heat could lead to a similar cascading failure in Phoenix, exposing vulnerabilities and weaknesses in the region’s infrastructure that are difficult to foresee.”

In Chester’s view, a Phoenix heat catastrophe begins with a blackout. It could be triggered any number of ways. During periods of extreme heat, power demand surges, straining the system. Inevitably, something will fail. A wildfire will knock out a power line. A substation will blow. A hacker might crash the grid.

In 2011, a utility worker doing routine maintenance near Yuma knocked out a 500-kilovolt power line that shut off power to millions of people for up to 12 hours, including virtually the entire city of San Diego, causing economic losses of $100 million. A major blackout in Phoenix could easily cost much more, says Chester.

But it’s not just about money. When the city goes dark, the order and convenience of modern life begin to fray. Without air conditioning, temperatures in homes and office buildings soar. (Ironically, new, energy-efficient buildings are tightly sealed, making them dangerous heat traps.) Traffic signals go out. Highways gridlock with people fleeing the city. Without power, gas pumps don’t work, leaving vehicles stranded with empty tanks. Water pipes crack from the heat, and water pumps fail, leaving people scrounging for fresh water. Hospitals overflow with people suffering from heat exhaustion and heatstroke. If there are wildfires, the air will become hazy and difficult to breathe. If a blackout during extreme heat continues for long, rioting, looting, and arson could begin.

And people will start dying. How many? “Katrina-like numbers,” Chester predicts. Which is to say, thousands. Chester describes all this coolly, as if a Phoenix heat apocalypse is a matter of fact, not hypothesis.

“How likely is this to happen?” I ask.

Extreme heat is the most direct, tangible, and deadly consequence of our hellbent consumption of fossil fuels. Rising carbon-dioxide levels in the atmosphere trap heat, which is fundamentally changing our climate system. “Think of the Earth’s temperature as a bell curve,” says Penn State climate scientist Michael Mann. “Climate change is shifting the bell curve toward the hotter end of the temperature scale, making extreme-heat events more likely.” As the temperature rises, ice sheets are melting, seas are rising, hurricanes are getting more intense, rainfall patterns are changing (witness the recent flooding in the Midwest). Drought and flooding inflict tremendous economic damage and create political chaos, but extreme heat is much more likely to kill you directly. The World Health Organization predicts heat stress linked to the climate crisis will cause 38,000 extra deaths a year worldwide between 2030 and 2050. A recent study published in Nature Climate Change found that by 2100, if emissions continue to grow, 74 percent of the world’s population will be exposed to heat waves hot enough to kill. “The more warming you have, the more heat waves you have,” says Michael Wehner, a scientist at Lawrence Berkeley National Laboratory. “The more heat waves you have, the more people die. It’s a pretty simple equation.”

Heat waves are driven not just by rising temperatures but by a change in the dynamics of the Earth’s climate system. As the atmosphere warms, the temperature difference between the poles and the subtropics is shrinking, which is changing the path of the jet stream, the big river of wind 35,000 feet up in the sky that drives our weather system. The jet stream’s path is shaped by atmospheric waves called Rossby waves, which are created naturally as the Earth spins. Mann explains that as the Earth’s temperature gradient flattens, the Rossby waves tend to bend, resulting in a curvy jet stream that is more likely to get “stuck,” trapping weather systems in place and creating what Mann calls “huge heat domes.”

Extreme heat is already transforming our world in subtle and not-so-subtle ways. Disney executives recently voiced concern that rising temperatures will significantly reduce the number of visits to their parks. In Germany, officials were forced to put a speed limit on the autobahn because of fears the road would buckle from heat. The U.S. military has already incurred as much as $1 billion in costs during the past decade — from lost work, retraining, and medical care — due to the health impacts of heat. The warming of the planet “will affect the Department of Defense’s ability to defend the nation and poses immediate risks to U.S. national security,” a recent DOD report said. Forests and soils are drying out, contributing to explosive and unprecedented wildfires. Habitation zones for plants and animals are changing, forcing them to adapt to a warmer world or die. A U.N. report found that 1 million species are at risk of extinction in the coming decades. Another study by researchers at MIT suggests that rising temperatures and humidity may make much of South Asia, including parts of India and Pakistan, too hot for human existence by the end of the century. As scientist Peter Gleick, co-founder of the Pacific Institute in California, told me, “There is a shocking, unreported, fundamental change coming to the habitability of many parts of the planet, including the USA.”

Since the Industrial Revolution, the Earth’s temperature has risen by 1.8°F (1°C). As we burn more fossil fuels, the warming is accelerating. The planet’s average surface temperature in 2018 was the fourth-highest since 1880, when record-keeping began. Gavin Schmidt, a climate scientist at NASA, said there’s a “90 percent chance” that 2019 will turn out to be even hotter. Nine of the 10 warmest years in recorded history have occurred since 2005. This past June was the hottest June ever recorded. Astonishingly, July was the hottest month in human history.