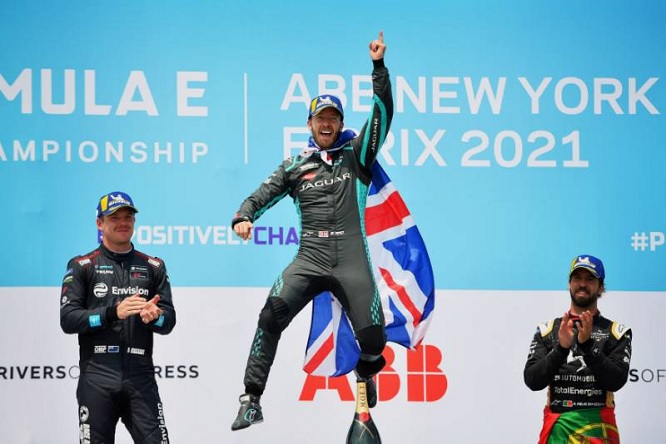 Jaguar Racing’s Sam Bird makes it a fairytale of New York at the ABB New York City E-Prix Round 11, bouncing back from a difficult Saturday to take a dominant lights-to-flag victory to jump to the top of the Drivers’ standings.

After picking up pole position for Round 11 of the 2020/21 ABB FIA Formula E World Championship in New York City, Sam Bird bounced back for a dominant win around the challenging Brooklyn street circuit, repaying Jaguar Racing’s efforts from a difficult Saturday that saw the team rebuild his car.

The win puts Bird atop of the Drivers’ standings with 81 points as the all-electric racing series heads to his home race in London. However, on the other side of the Jaguar garage, the team were left ruing a potential one-two finish after Evans suffered severe damage to his car whilst trying to defend second position.

On the final step of the podium was DS TECHEETAH’s Antonio Felix da Costa. The reigning champion stealthily making his way up from seventh on the grid to secure vital points for his title defence as the series heads towards the final four races of the season.

Under grey skies, Bird got the drop on the field and the holeshot into Turn 1, pulling a clean lead out of the tricky first complex of corners. Behind the Brit, his Jaguar teammate Evans had a rough launch off the dirty side of the track, locking up into the first turn whilst defending from his compatriot Cassidy.

After breaking down in qualifying, Vergne’s day went from bad to worse as the Frenchman was unable to get his DS Techeetah off the line and was left stranded on the grid, bringing out the Mini Safety Car.

With the green flag out on Lap 3, Bird wasted no time and immediately jumped to put some air between himself and Evans.

After losing a place following a robust move from TAG Heuer Porsche’s Andre Lotterer for 7th, Alexander Sims (Mahindra Racing) was the first driver to make thhe dive to the outside at the Turn 10 hairpin, taking an additional 35kW from the ATTACK MODE activation.

After qualifying down in 19th, Jake Dennis made some movements through the field to the just outside of the top 10, but the BMW i Andretti Motorsport driver’s progress was halted after clipping the rear of ROKiT Venturi Racing’s Edoardo Mortara and spinning the championship leader on Lap 7, the Swiss-Italian losing some vital positions in the process.

On Lap 8, the Jaguar duo, line astern, both dived for their ATTACK MODE. Bird was able to retain his lead, but Cassidy moved by Evans into second. With an extra 35kW of power under his feet, Evans quickly pounced on his compatriot with a clean pass.

With 15 minutes of the race in the bag, Bird looked smooth and control in the lead, pulling a gap of nearly a second on Evans and Cassidy, with the latter closely covering the rear diffuser of the second-placed driver.

A few laps later, Bird and Cassidy both jumped for their ATTACK MODE. In a perfectly choreographed piece of strategy, Evans allowed his teammate back through to keep Cassidy at bay with Evans working as a moving roadblock and allowing Bird to stretch out a gap of nearly two seconds.

With Cassidy having a power advantage, the Envision Virgin Racing rookie made his move on Evans to take second, sweeping round the outside before braking for Turn 6. With that place lost, Evans took his second and final ATTACK MODE to mount a challenge on Cassidy.

With that perfectly timed ATTACK MODE, Evans put in the fastest lap to leap up to the rear diffuser of Cassidy and dived up the inside for second at the Turn 10 hairpin. Behind the pair, after stealthily making his way through the pack, reigning champion Da Costa ominously clawed up to Cassidy for the final rostrum spot.

Rivals from the very beginnings of Formula E, Lucas di Grassi (Audi Sport ABT Schaeffler) spun Nissan e.dams’ Sebastien Buemi at Turn 6, the Brazilian coming under the watchful eye of the FIA and picking up a 10-second penalty for the offence.

On Lap 25, Bird continued to stretch his legs and run away with a lead over 2.5s on his teammate, whilst a fight brewing build behind the leader.

Da Costa attempted a move on Lap 27, engaging his FANBOOST but getting into the dusty part of the track it allowed Cassidy to hold the position with a daring defence. However, with the New Zealander appearing to be overusing his useable energy, Da Costa’s crew encourage the Portuguese driver with a message over the radio saying “we can get him.”

At the head of a train, Evans was now facing pressure from not only Cassidy and Da Costa but now also the Porsche pairing of Pascal Wehrlein and Lotterer. Trying to fend off the pack the New Zealander clouted the wall on the outside of Turn 4, taking some heavy damage to his left rear suspension – immediately dropping back from second down to fourth after looking relatively in control of the train.

Evans’ mistake left Cassidy in second now facing pressure from Da Costa in third, the experienced Portuguese driver trying to force the rookie to over-consume his useable energy in the final stages.

With too much damage to the rear of his car, Evans was left in trouble losing places left, right and centre on the final lap. Eventually crawling home across the line in 13th position.

But with all that carnage behind, Bird crossed the line with a comfortable four-second lead, jubilantly singing “it’s coming home” and congratulating the team after bouncing back from a difficult race on Saturday.

With his second win for 2020/21, Bird heads to his home race in London in the lead of the Drivers’ standings.

Behind Bird it was another podium in New York City for Cassidy, topping off a competitive weekend for the rookie. On the final step of the podium was Da Costa claiming some vital points for his championship defence, moving up to second in the standings after picking up third and the TAG Heuer Fastest Lap.

Next up it is London’s calling for the 2020/21 ABB FIA Formula E World Championship with the Heineken London E-Prix Rounds 12 and 13 in two weeks on July 24 and 25.