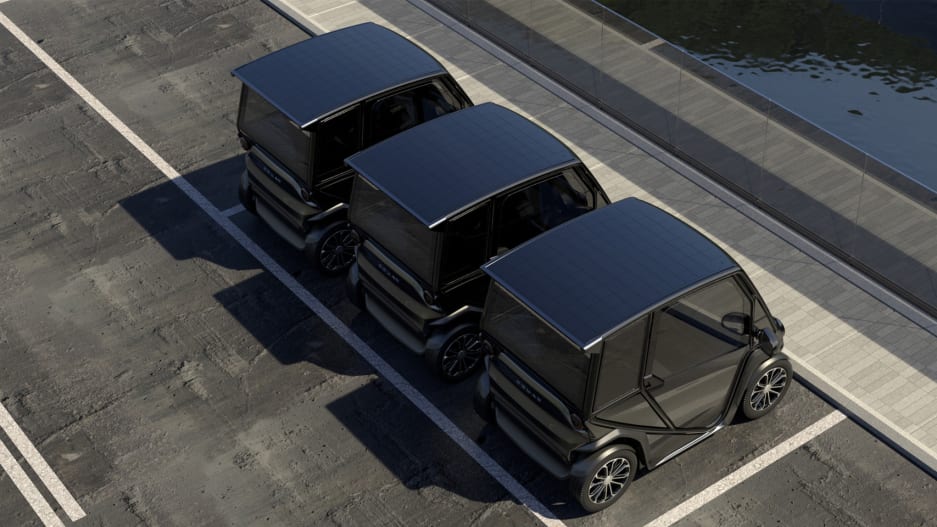 The two-seater car can go 12 miles on a charge, with a top speed of 28 mph—perfect for short city errands.

The Squad, a new urban car from an Amsterdam-based startup, is barely bigger than a bicycle: Parked sideways, up to four of the vehicles can fit in a standard parking spot. The electric two-seater’s tiny size is one reason that it doesn’t use much energy—and in a typical day of city driving, it can run entirely on power from a solar panel on its own roof. A swappable battery provides extra power when needed.

The car is slated to begin production in late 2022, and will be priced at around $6,800. The two cofounders previously worked at Lightyear, a startup making a solar-powered electric car for the luxury market. Lightyear’s first car will start at around $135,000, though the cost will go down as production increases. “We saw the potential of solar charging,” says Robert Hoevers, CEO of Squad Mobility. “But we both agreed that it was a shame that the car was only available for the happy few. We wanted to make a vehicle that’s basically available to everybody.”

Since the new car is designed for use only on city streets, with a top speed of 28 mph, it’s well suited for solar power. “Because the speeds are lower, the energy usage is lower, you can do more with your solar energy,” Hoevers says.

As the car sits outside, it can generate enough energy in a day to drive around 12 miles, more than it takes to run a typical errand. (In the U.S., nearly half of all car trips in cities are shorter than 3 miles, and 20% are shorter than 1 mile.)

Having solar power makes the car easier to use, since it doesn’t need frequent charging, and helps reduce demand on the local grid. But the portable battery in the car can also be taken out and charged indoors, so apartment-dwellers don’t have to worry about where to plug in.

The rapidly falling cost of solar power, which dropped 89% over a decade, helps make it feasible to plaster a car with solar cells. The solar panel is almost the same size as a standard solar panel used on the roof of a house. “Because that’s so close to commercial solar panels, they can be made on regular solar panel machinery,” Hoevers says. “And because of that fact, we can keep the price very low.”

In a city like Amsterdam, most people make short trips on bikes. But in cities that don’t yet have good bike infrastructure, or where the weather makes biking difficult, the company hopes to help fill a gap.

For basic errands, like picking up groceries or taking a child to school, the tiny size is adequate. It’s similar to the Renault Twizy, another electric microcar designed for use in cities.

In addition to selling the car directly to drivers, Squad plans to sell to companies that run fleets for car sharing. Sensors in the car remotely track the charge level in the battery, tire pressure, and location, and cameras can let car-sharing operators monitor the cars and remotely reposition them if they’re parked incorrectly. (Eventually, the company wants to offer a fully autonomous version of the vehicle.)

The company has built internal prototypes, and will unveil its commercial prototype in September before beginning production next year. Preorders are open in Europe. “We have huge interest from cities and from sharing operators,” Hoevers says. “Cities are looking for a low-space footprint, and no-emissions footprint, and preferably a combination of the two.”