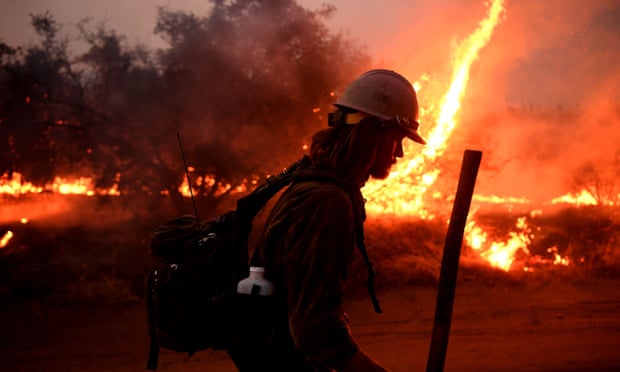 A California couple has been criminally charged for their role in igniting last year’s destructive El Dorado wildfire after they used a pyrotechnic device during a gender-reveal party.

The blaze torched close to 23,000 acres (9,300 hectares), destroyed five homes and 15 other buildings, and claimed the life of a firefighter, Charlie Morton.

Refugio Manuel Jimenez Jr and Angela Renee Jimenez were indicted for 30 crimes including involuntary manslaughter, said Jason Anderson, the San Bernardino county district attorney, during a press conference. The couple pleaded not guilty and were released to await their court date.

Along with the destroyed homes and structures, four additional residences were damaged and there were 13 injuries. Morton, who was 39 years old when he was killed, was a 14-year veteran firefighter with the San Bernardino national forest service, and served as part of an elite team that deploys across the US to fight wildland fires.

“He’s fighting a fire that was started because of a smoke bomb,” Anderson said of Morton’s death. “That’s the only reason he’s there.”

The fire season last year set new records in the state for the expansive area that burned, with more than 4.2m acres (1.7m hectares) scorched by more than 9,900 fires across California.

Extremely dry conditions and heat waves tied to climate change have made wildfires harder to fight. Climate change has made the West much warmer and drier in the past 30 years and will continue to make weather more extreme and wildfires more frequent and destructive.

The fire was one of thousands during a record-breaking wildfire season in California that charred more than 4% of the state while destroying nearly 10,500 buildings and killing 33 people.

The couple were released on their own recognizance pending a Sept. 15 court date.

Gabrielle Canon via The Guardian