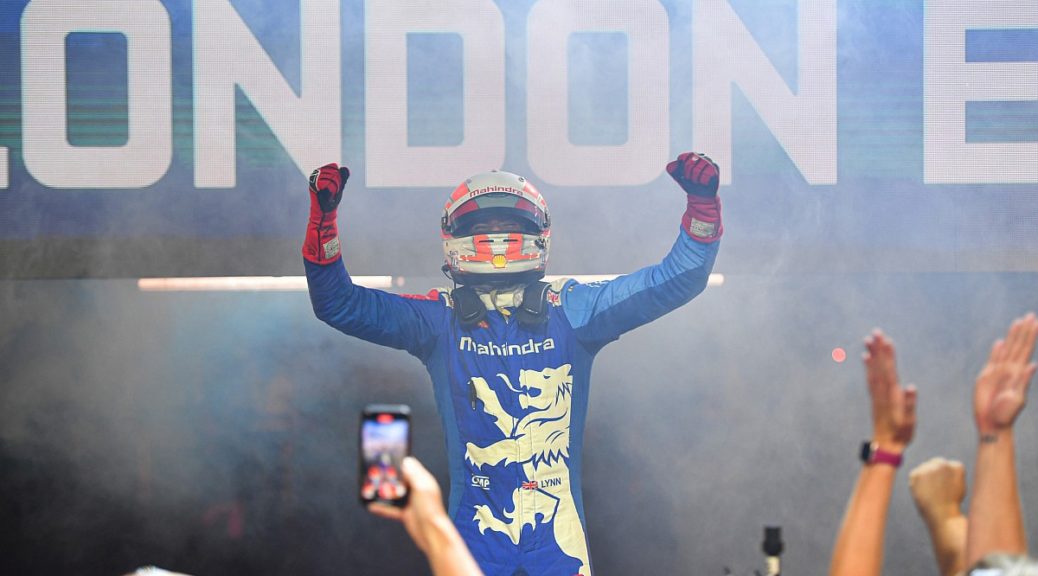 Alex Lynn sparked wild celebrations down in the Mahindra Racing garage as he steered to an emotional maiden Formula E victory in the Heineken® London E-Prix Round 13, with Mercedes-EQ’s Nyck de Vries and Mitch Evans (Jaguar Racing) rounding out the podium.

The Brit navigated a frenetic encounter that had it all, and the decisive moment of the race took place with the pack released from a spell under the Safety Car on Lap 13. Down at the double hairpin, Oliver Rowland (Nissan e.dams) made a move for the lead with a surprise lunge on Stoffel Vandoorne (Mercedes-EQ) – who had led away from Julius Baer Pole Position.

A bump in the braking zone left the Nissan driver a passenger as he speared into the side of the Belgian’s Mercedes. The pair were left all tangled up, allowing de Vries to pick up the pieces and pinch second – and then first when Lucas di Grassi (Audi Sport ABT Schaeffler) leapt for ATTACK MODE.

The final 60 seconds of *THAT* race 🤯⚡️@alexlynnracing crossing the line to win at his home race, and pick up his first-ever Formula E victory 👏

Heading into the final quarter hour, di Grassi had made the most of that 35kW boost to slice by de Vries into Turn 1. On the next tour, Lynn followed with what would ultimately be the race-winning move – the Mahindra driver also in ATTACK MODE. De Vries’ early dart for his second activation had not paid dividends, and he’d have to settle for second spot, while Evans picked his way through from fifth on the grid to an eventual third at the chequered flag.

Di Grassi had led on track for more than half of the race, and crossed the line first. The Brazilian was ultimately shown the black flag for failing to serve a drive-through penalty – deemed to have illegally taken the race lead by audaciously driving through the pit-lane, and crucially failing to come to a stop in his pit-box, under Safety Car conditions on Lap 12.

That result leaves de Vries atop the Drivers’ World Championship heading into the final race weekend of Season 7 in Berlin in three weeks’ time, while Robin Frijns’ points haul with fourth – up from eighth on the grid – proved vital and sees him second in the table, just six points shy of the Dutchman. Sam Bird (Jaguar Racing) holds third in the standings.

Envision Virgin Racing still heads the way in the Teams’ running by seven points from Mercedes-EQ, with Jaguar Racing third.

Vandoorne fired off the line and cut across Rowland to defend into Turn 1 as the pack filtered through three wide – the Belgian pulling a gap of almost 1.5 seconds on the rest come the end of the opening lap.

De Vries had the hammer down too, with both Mercedes’ looking really hooked up. The Dutchman got the jump on Lynn with an incisive move down at Turn 10 to take third on Lap 2, with Rowland’s Nissan in his sights.

Further down the field, the standings’ top two came to blows at the same spot on Lap 4, with reigning champion Antonio Felix da Costa shoving the Brit’s Jaguar with an elbows-out pass for 18th as the pair scrapped hard for whatever they could get their hands on.

Out front, Rowland was the first to make the jump for the first of two mandatory doses of ATTACK MODE; the eight-minute 35kW power boost requiring a quick diversion off the racing line to activate. The Mercedes duo followed a lap later to counter.

With 35 minutes plus one lap to run, Rene Rast (Audi Sport ABT Schaeffler) and Sebastien Buemi (Nissan e.dams) came to blows in clumsy contact down at the switchback. The German fared worst, forcing the MINI Electric Pacesetter into making an appearance while his stricken Audi was recovered. Buemi survived to climb to 11th and the cusp of the points.

With the track cleared, the Mercedes’ seized the initiative. Vandoorne led Rowland and de Vries away, and the latter was able to jump by the Nissan in the middle of the Silver Arrow sandwich to take second – thanks to that extra lap of ATTACK MODE relative to Rowland.

Another appearance for the Safety Car followed on Lap 11, with da Costa in the wall at Turn 1 after contact with Porsche’s Andre Lotterer. The Mercedes duo at the head of the pack did manage to sneak in their second ATTACK MODE activations just prior, crucially before Rowland this time.

Audaciously, on Lap 12, Lucas di Grassi took a trip through the pit-lane in a bid to take the lead. With the speed limit quicker than the pack was travelling, the 2016/17 champion pinched first.

As the pack went racing once again on Lap 13, drama ensued down at the double hairpin. Rowland made his move with a surprise lunge on Vandoorne for second spot. A bump in the braking zone left the Nissan driver a passenger as he speared into the side of the Belgian’s Mercedes. The pair were all tangled up, allowing de Vries to pick up the pieces and pinch second – and then first when leader di Grassi leapt for ATTACK MODE. Unsurprisingly, Rowland was slapped with a 10-second time penalty.

.@Andre_Lotterer picks up a penalty for this incident which took @afelixdacosta out of the race 💥

Heading into the final quarter hour, and di Grassi made the most of that 35kW boost to slice by de Vries into Turn 1 on Lap 16. On the next tour, Lynn followed – the Mahindra driver also still wielding ATTACK MODE. De Vries’ early dart for his second activation had not paid dividends.

Outside the top three, it was Evans who was best of the rest though four seconds back from the trio at the front. Robin Frijns made his way by Guenther for fifth into Turn 1, going all the way around the outside of Guenther’s BMW. The Dutchman wasn’t done there, though, and set about hassling Evans for fourth. With his mirrors full of the purple Envision Virgin Racing machine, the Kiwi jumped for his second ATTACK MODE activation, but missed the loop and had to go again on Lap 22 – allowing Frijns by.

The Kiwi atoned for his error in fine style down at the hairpin half a lap later with a textbook dummy on Frijns that took the Dutchman by surprise.

.@alexlynnracing makes the move on @nyckdevries putting him in P2!

Bird had clambered his way up from 21st up to 11th and scented valuable points with Nato just ahead. The Brit sold the Frenchman the dummy before diving up the inside of the Venturi. Nato defended hard and the pair both ended up damaged and out of the running.

Di Grassi’s fun and games with that opportunistic trip through the pit-lane wouldn’t stand, with the race leader penalised via a drive-through penalty for a Safety Car procedure infringement – meaning home hero Lynn would inherit top spot and the race victory at the chequered flag, with di Grassi’s failure to serve his penalty.