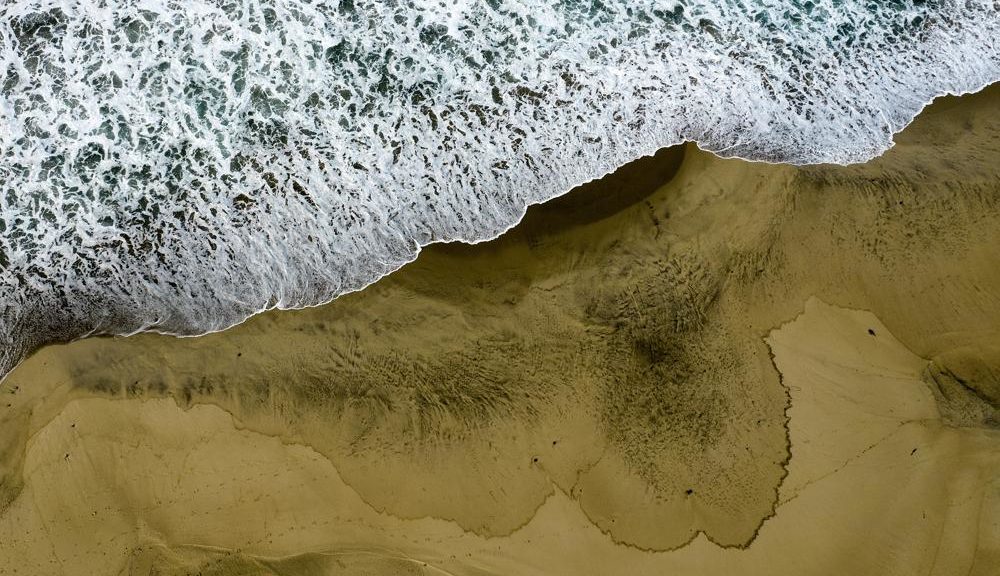 Officials investigating one of California’s largest recent oil spills are looking into whether a ship’s anchor may have struck an oil pipeline on the ocean floor, causing heavy crude to leak into coastal waters and foul beaches, authorities said Monday.

The head of the company that operates the pipeline said company divers were inspecting the area of the suspected leak that was discovered Saturday, and he expected that by Tuesday there would be a clearer of what caused the damage.

A anchor from a cargo ship striking the pipeline is “one of the distinct possibilities” behind the leak, Amplify Energy CEO Martyn Willsher told a news conference. He said divers have examined more than 8,000 feet (2,438 meters) of the pipeline and were focusing on “one area of significant interest.”

Cargo ships entering the twin ports of Los Angeles and Long Beach routinely pass through the area, Coast Guard officials said. Backlogs have plagued the ports in recent months and several dozen or more of the giant vessels have regularly been anchored as they wait to enter the ports and unload.

“We’re looking into if it could have been an anchor from a ship, but that’s in the assessment phase right now,” Coast Guard Lt. Cmdr. Jeannie Shaye said. 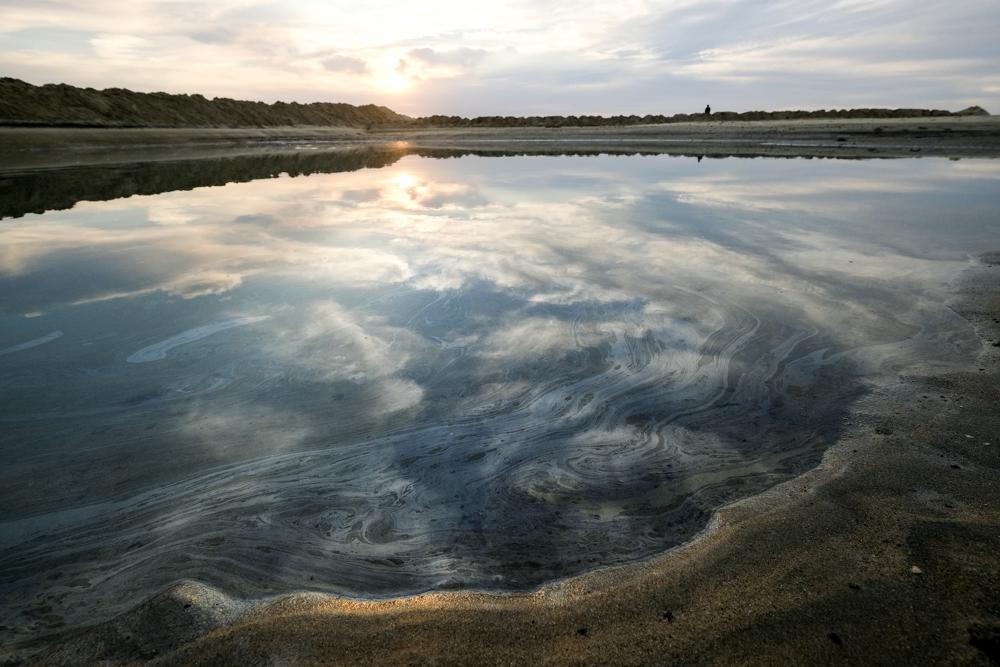 Oil floats on the water surface after an oil spill in Huntington Beach, Calif., on Monday, Oct. 4, 2021. A major oil spill off the coast of Southern California fouled popular beaches and killed wildlife while crews scrambled Sunday, to contain the crude before it spread further into protected wetlands. (AP Photo/Ringo H.W. Chiu)

The spill sent up to 126,000 gallons (572,807 liters) of heavy crude into the ocean, contaminating the sands of famed Huntington Beach and other coastal communities. The spill could keep beaches closed for weeks or longer.

The Orange County district attorney, Todd Spitzer, said he has investigators looking into whether he can bring state charges for the spill even though the leak occurred in waters overseen by the U.S. government.

Spitzer also said Amplify’s divers should not be allowed near the pipeline without an independent authority alongside them.

Other potential criminal investigations were being pursued by the U.S. Attorney’s Office for the Central District of California, the Coast Guard and the California Department of Fish and Wildlife, officials said.

Safety advocates have pushed for years for federal rules that would strengthen oil spill detection requirements and force companies to install valves that can automatically shut down the flow of crude in case of a leak. The oil and pipeline industries have resisted such requirements because of the high cost.

“If the operator had more valves installed on this line, they’d have a much better chance at having the point of failure isolated by now,” said Bill Caram with the Pipeline Safety Trust, an organization based in Bellingham, Washington.

The pipeline was built using a process known as electric resistance weld, according to a regulatory filing from the company. That welding process has been linked to past oil pipeline failures because corrosion can occur along seams, according to government safety advisories and Pipeline Safety Trust Director Bill Caram.

Annual reports filed with federal regulators in 2019 and 2020 showed inspections for the inside and outside of the pipe revealed nothing requiring repairs.

On Sunday as the extent of the spill was being revealed environmentalists had feared the oil might devastate birds and marine life in the area. But Michael Ziccardi, a veterinarian and director of the Oiled Wildlife Care Network, said only four oily birds had been found so far. One suffered chronic injuries and had to be euthanized, he said.

“It’s much better than we had feared,” he said at a news conference Monday.

Ziccardi said he’s “cautiously optimistic,” but it’s too soon to know the extent of the spill’s effect on wildlife. In other offshore oil spills, the largest number of oiled birds have been collected two to five days after the incident, he said.

Amplify operates three oil platforms about 9 miles (14.5 kilometers) off the coast of California, all installed between 1980 and 1984. The company also operates a 16-inch pipeline that carries oil from a processing platform to an onshore storage facility in Long Beach. The company has said the oil appears to be coming from a rupture in that pipeline about 4 miles (6.44 kilometers) from the platform.

In a 2016 spill-response plan submitted to federal regulators, the company said its worst-case spill scenario was based on the assumption of a “full guillotine cut” of the pipeline occurring 3 miles (4.8 kilometers) inland from one of its platforms. But an outside consultant concluded that a spill of that size was “very unlikely” at that location because the line is 120 feet deep and beneath a shipping lane where ships do not normally anchor.

The Beta oil field has been owned by at least seven different corporations since it was discovered by Royal Dutch Shell in 1976, records show. A corporate predecessor of Amplify bought the operation in 2012.

The Amplify subsidiary known as Beta Operating Co. has been cited 125 times for safety and environmental violations since 1980, according to a database from the Bureau of Safety and Environmental Enforcement, the federal agency that regulates the offshore oil and gas industry. The online database provides only the total number of violations, not the details for each incident. 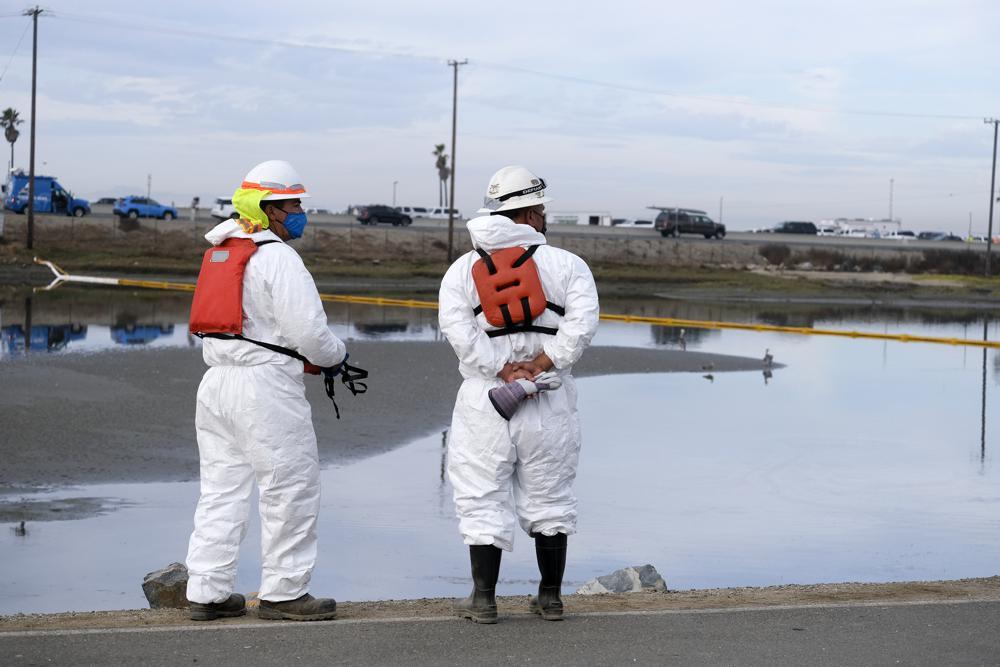 Cleanup contractors get ready to work in the Wetlands Talbert Marsh after an oil spill in Huntington Beach, Calif., on Monday, Oct. 4, 2021. A major oil spill off the coast of Southern California fouled popular beaches and killed wildlife while crews scrambled Sunday, to contain the crude before it spread further into protected wetlands. (AP Photo/Ringo H.W. Chiu)

The company was fined a total of $85,000 for three incidents. Two were from 2014, when a worker who was not wearing proper protective equipment was shocked with 98,000 volts of electricity. The worker survived. In a separate incident, crude oil was released through a boom where a safety device had been improperly bypassed.

In 1999, an undersea pipeline running between two platforms sprang two leaks totaling at least 3,800 gallons of oil, causing tar balls to wash up on beaches in Orange County.

The cause of of the leaks was determined to be corrosion that caused pin-sized holes in the steel walls of the pipeline. The owner of the oil field at the time, a partnership between Mobil Oil Corp. and Shell Oil Co. called Aera Energy LLC, was fined $48,000 by federal regulators — a penalty environmental groups criticized as a slap on the wrist.

Before the spill, Amplify had high hopes for the Beta oil field and was pouring millions of dollars into upgrades and new “side track” projects that would tap into oil by drilling laterally.

“We have the opportunity to keep going for as long as we want,” Willsher said in an August conference call with investors. He added there was capacity “up to 20,000 barrels a day.”

Investors shared Willsher’s optimism, sending the company’s stock up more than sevenfold since the beginning of the year to $5.75 at the close of trading on Friday. The stock plunged 43% in trading Monday.

The company filed for bankruptcy in 2017 and emerged a few months later. It had been using cash generated by the Beta field and others in Oklahoma and Texas to pay down $235 million in debt.