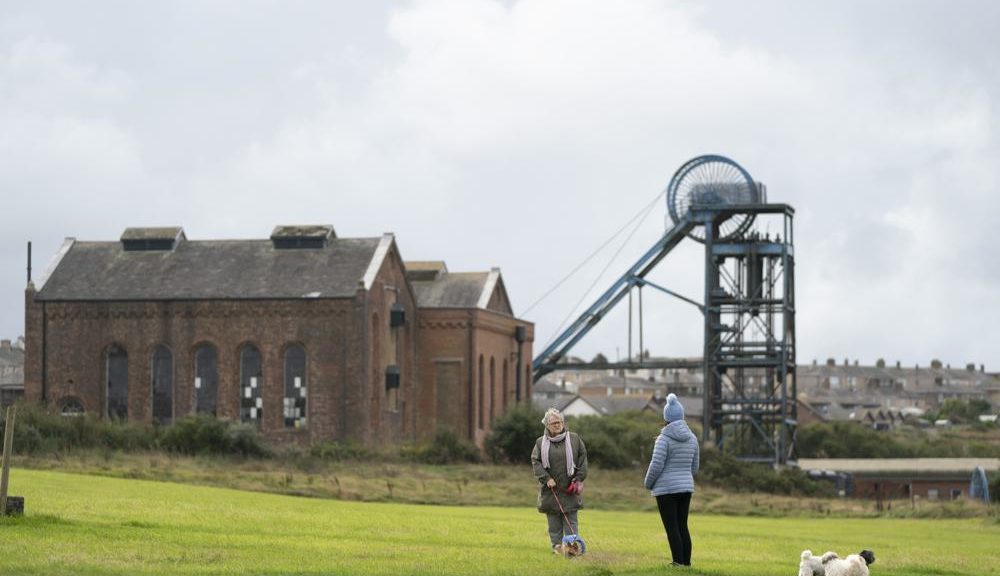 In the patchwork of hills, lakes and sea that makes up England’s northwest corner, most people see beauty. Dave Cradduck sees broken dreams.

The coal mine where Cradduck once worked has long closed. The chemical factory that employed thousands is gone. The nuclear power plant is being decommissioned.

For the 74-year-old Cradduck, a plan for a new coal mine that could bring hundreds of jobs is cause for hope.

But environmentalists view it with horror. They say it sends a disastrous message as the United Kingdom welcomes world leaders, advocates, diplomats and scientists to Glasgow, Scotland, for a United Nations climate conference that starts Oct. 31. The two-week COP26 meeting is considered a last chance to nail down carbon-cutting promises that can keep global warming within manageable limits.

“The U.K. sets itself out as a leader, but it’s building a coal mine, which is the most polluting thing that you can do,” said Rebecca Willis, professor of energy and climate governance at Lancaster University. “It sends a signal to the rest of the world that the U.K. isn’t actually serious.”

But Cradduck sees the mine as a sign that “at least someone’s interested in the area.” He says it “will provide jobs for people who have got mining in their blood.” 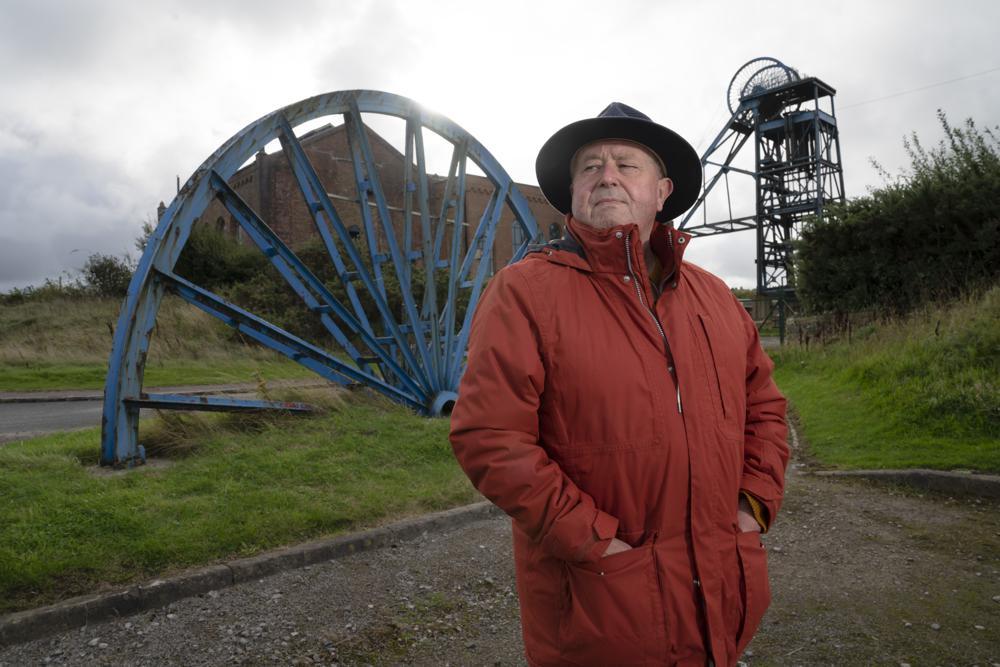 Former miner Dave Cradduck who worked at Haig Colliery between 1964 and 1984 poses for a picture at the Haig Colliery Mining Museum close to the site of a proposed new coal mine near the Cumbrian town of Whitehaven in northwest England, Monday, Oct. 4, 2021. For the 74-year-old Cradduck, a plan for a new coal mine that could bring hundreds of jobs is cause for hope. But environmentalists view it with horror. They say it sends a disastrous message as the United Kingdom welcomes world leaders, advocates, diplomats and scientists to Glasgow, Scotland, for a United Nations climate conference that starts Oct. 31. (AP Photo/Jon Super)

The proposed new mine symbolizes the dilemma facing the British government: It aims to generate all of the U.K.’s electricity from clean energy sources by 2035, and to reach net-zero carbon emissions by 2050. But Conservative Prime Minister Boris Johnson has also pledged to boost prosperity in England’s neglected north with new factories, roads, railways and other infrastructure that environmentalists say is at odds with the government’s green agenda.

West Cumbria Mining, the company hoping to build Britain’s first deep coal mine in three decades, wants to extract coking coal — a type used to make steel rather than for fuel — from under the Irish Sea. It plans to process the coal on the site of a shuttered chemical plant in Whitehaven, 340 miles (550 kilometers) northwest of London.

The company says this is a new kind of mine, far removed from the dirty, dangerous behemoths whose brick and steel skeletons dot the region’s landscape. Designs show curved modern buildings that blend in with the surrounding hills, and the company says it will be the world’s first net-zero coal mine, with all of its carbon emissions reduced or offset by credits to the Gold Standard Foundation, an environmental organization.

Alexander Greaves, a lawyer for the mining company, said while opening a new coal mine might look bad at first glance, this project aims to be different.

“Showing these mines can be made by law … to capture greenhouse gas emissions and required to offset any residual impact … is true environmental leadership,” he said.

Environmentalists scoff at that idea. 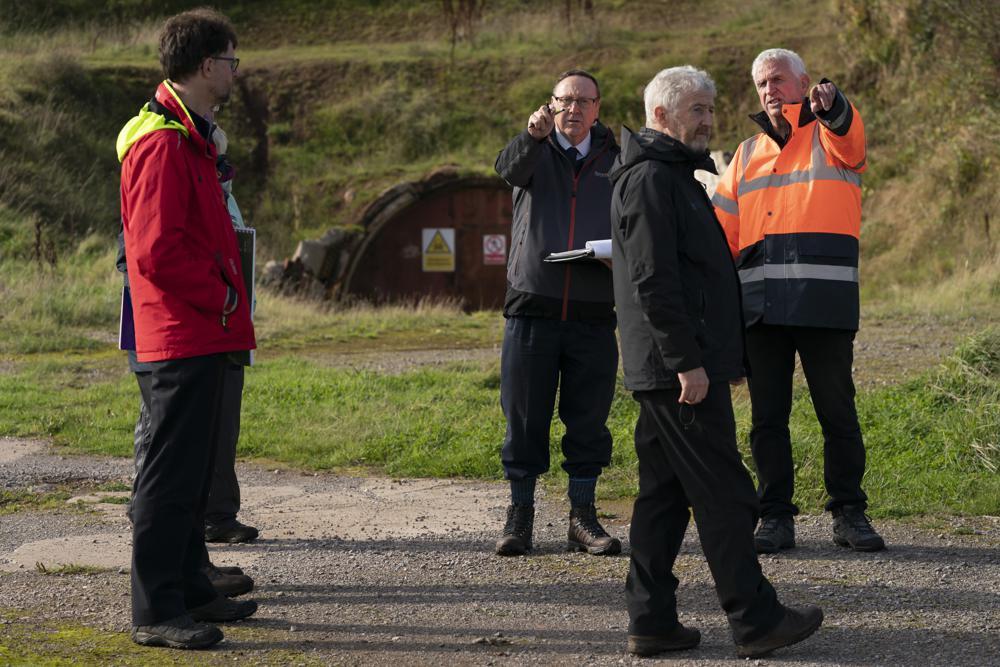 Members of a public inquiry into the feasibility of a proposed new coal mine make a visit to the site near the town of Whitehaven in northwest England, Monday, Oct. 4, 2021. (AP Photo/Jon Super)

“It’s blindingly obvious that the quickest way to stop these carbon emissions and to make radical changes — which we have to do in the next 10 years — is to stop opening any new coal mines,” said Maggie Mason, a local opponent of the mine. “The same is true for oil wells and gas wells.”

Nature and industry have long vied for supremacy in this part of England. Whitehaven sits on the edge of the Lake District National Park, an area whose beauty inspired William Wordsworth and Beatrix Potter. But the area once was home to industries that offered hard, dirty jobs in factories and mines. Now, though, wind turbines spin beside the sea — a sign of Britain’s transition from fossil fuels to renewable energy, which last year produced almost half of the country’s electricity.

That share shrank this year — partly due to a lack of wind — and with the cost of imported natural gas soaring and plans for new nuclear plants moving at a crawl, the U.K. government is still considering new fossil-fuel projects.

Elsewhere, there’s the Cambo oilfield in the North Atlantic, west of the Shetland islands, where Shell and Siccar Point Energy plan to extract 170 million barrels of oil. Environmental groups are trying to force the British government to stop the drilling, but Johnson’s administration is reluctant to intervene, saying “sources like Cambo are still required” to meet Britain’s energy needs as it shifts to a low-carbon economy.

“We need to transition our existing oil and gas sector to a decarbonized platform,” Business Secretary Kwasi Kwarteng said last month in the House of Commons, accusing Cambo opponents of wanting “a complete eclipse” of the oil and gas industries “with 250,000 jobs vanishing overnight.”

POLAND ORDERED TO PAY $580,000 FINE FOR EACH DAY IT CONTINUES OPERATING A CONTROVERSIAL COAL MINE

Poland will have to pay a €500,000 ($586,000) fine for each day it continues extracting coal at an open-pit mine near the Czech and German borders, Europe’s top court ruled Monday, 20 September.

In West Cumbria, the local authority approved the mine a year ago. The area’s Conservative mayor, Mike Starkie, says it will be “transformational.”

The British government, under pressure from opponents and its own environmental commitments, intervened in March and ordered an inquiry by a planning inspector. He says he will make a recommendation around the end of the year. Then the U.K. government will make a final decision — well after COP26 has ended.

Local supporters of the mine believe they are the silent majority, at risk of being drowned out by environmental activists. Some rallied at the site this month, holding signs that read “Part of the answer, not part of the problem” and “Cumbria coke is the real thing.”

“It’s been very simplified in the press that it’s jobs against the climate,” said John Greasley, who helps run a Facebook page in support of the mine. “And, of course, the climate is going to win every time. But it’s deeper than that.”