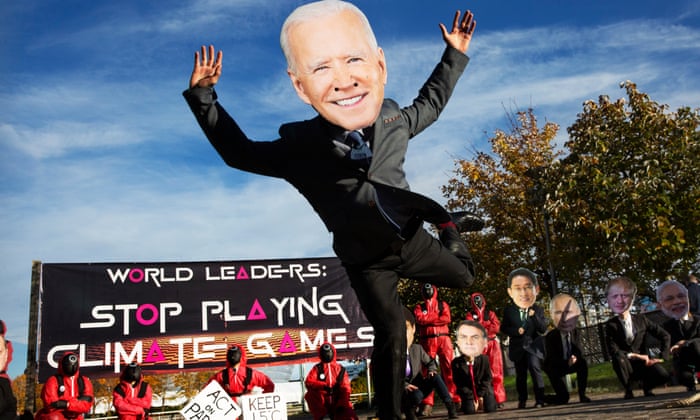 US declined to join promise to end coal mining and to compensate poor countries for climate damage. Critics ask, is that leadership?

The crucial UN climate talks in Scotland have produced landmark commitments to phase out coalmining, to call time on the internal combustion engines and to compensate poorer countries for damage caused by the climate crisis.

The United States, which has trumpeted its regained climate leadership at the summit, has not joined any these pledges as the talks draw to a close.

This disconnect has provided the world with a muddled sense of America’s willingness to confront the unfolding climate catastrophe, with the fate of historic legislation to lower planet-heating emissions still uncertain ahead of an expected vote in Congress next week.

Joe Biden arrived in Glasgow vowing the US will “lead by example” on climate change and avoid disastrous global heating beyond 1.5C, dispatching his entire cabinet to the Cop26 talks and making widely praised new promises to cut methane, a potent greenhouse gas, and to end deforestation.

“This is the most ambitious climate legislation of all time,” Nancy Pelosi, the House speaker, told the summit. “America is back and is ready to lead,” added Kathy Castor, chair of the House select committee on the climate crisis. “Once we pass this historic package, finally, it will help keep 1.5C alive.”

But the US is bedeviled by its recent past and – many delegates of other countries fear – its potential future, following Donald Trump’s embrace of climate science denialism and American isolationism. “We have not recovered our moral authority,” admitted Alexandria Ocasio-Cortez, the progressive New York representative, when asked about the specter of the former president. “I believe we are making steps, but we have to actually deliver the action in order to get the respect internationally. It’s that simple.”

There is also mounting criticism that Biden’s actions have not matched his words and that the US president’s negotiators haven’t pushed hard enough for an ambitious deal in Glasgow to secure the deep emissions cuts needed to avoid disastrous warming that will spur ever-worsening floods, heatwaves and wildfires.

More than 40 countries announced at Cop26 a promise to end the mining of coal, the dirtiest of fossil fuels, although the US was conspicuously absent from the list. “It’s very disappointing because the science is quite clear that we have to turn sharply away from coal this decade if we are going to meet our climate goals,” said Rachel Cleetus, policy director at the Union of Concerned Scientists.

“We need very clear signals that orientate the US towards clean energy,” she added. “The climate crisis is too dire to just wait for coal to fall out. It’s just another signal of the sway the fossil fuel industry still has over US politics.”

Despite its attempts to expand the rollout of electric vehicles, the Biden administration has also declined to set an end date for the sale of new gasoline and diesel cars, unlike the UK, European Union, Canada, India and a slew of other countries at Cop26.

Its delegation in Glasgow is similarly wary of a push to provide “loss and damage” payments to countries vulnerable to climate impacts and has sought to shift criticism towards the inaction of China and Russia, although the US and China did unveil an unexpected plan to work together on cutting emissions, despite the enmity between the two countries.

This reticence, critics claim, undermines Biden’s credibility on climate. Others say the dysfunctional nature of Congress, where sweeping climate legislation to expand renewable energy and wind down fossil fuels is effectively in the hands of a senator who derives most of his income from investments in coal, is to blame.

“There is a handful of members of Congress who represent coal-intensive parts of the country who see [climate action] as a threat to their region,” Sean Casten, a Democratic representative, told the Guardian. “It’s kept the president from doing all that he’d like to do.”

Pete Buttigieg, the US transport secretary, told the Guardian that the Biden administration aims to give Americans better public transit options, as well as electric vehicle rebates and infrastructure, but that “each country is on its own path” to ending the age of fossil fuel-powered cars.

“What we are talking about is a race to the ambitious targets the president has set,” Buttigieg said, adding that the goal of half of all car sales being electric by 2030 will be in itself a “massive lift”.

Biden will face further scrutiny almost immediately after some sort of deal is struck in Glasgow, not only over the fate of the Build Back Better bill but also his issuance of permits for oil and gas drilling.

An auction of 80m acres of the Gulf of Mexico seabed, an area larger than the UK, will be offered to fossil fuel companies next week, while a new report has warned that the oil and gas that will be burned in the Permian Basin, a geological formation in the south-west US, by 2050 will release nearly 40bn tons of carbon dioxide, nearly a tenth of the remaining global “carbon budget” to stay under 1.5C.

“If the Biden administration wants to be serious about its promise to demonstrate US climate leadership, it must first clean up its own back yard,” said Steven Feit, senior attorney at the Center for International Environmental Law.

“The Permian Basin is the single largest fracking basin globally, and the continued reckless pursuit of oil extraction from New Mexico to the Gulf coast is the ultimate display of hypocrisy.”