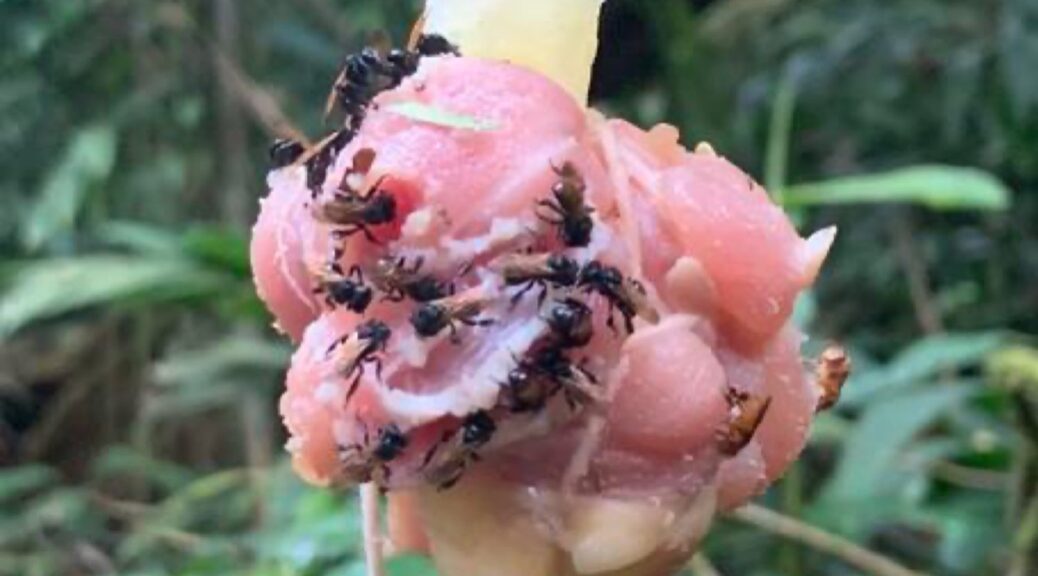 “The only bees… that have evolved to use food sources not produced by plants.”

Ask a random person to picture a bee, and they’ll likely conjure up the familiar black-and-yellow striped creature buzzing from flower to flower collecting pollen to bring back to the hive. But a more unusual group of bees can be found “slicing chunks of meat from carcasses in tropical rainforests,” according to the authors of a new paper published in the journal mBio. As a result, these bees have gut microbiomes that are markedly different from their fellow buzzers, with populations more common to carrion-loving hyenas and vultures. So they are commonly known as “vulture bees” (or “carrion bees”).

According to the authors—entomologists who hail from the University of California, Riverside (UCR), the University of Massachusetts, Amherst, Columbia University, and the American Museum of Natural History—most bees are essentially “wasps that switched to a vegetarian lifestyle.” But there are two recorded examples of bumblebees feeding on carrion dating back to 1758 and 1837, and some species are known to occasionally feed on carrion in addition to foraging for nectar and pollen. (They are considered “facultatively necrophages,” as opposed to vulture bees, which are deemed “obligate necrophages” because they only eat meat.)

An entomologist named Filippo Silvestri identified the first “vulture bee” in 1902 while analyzing a group of pinned specimens, although nobody called it that since they didn’t know at the time that this species fed on carrion. Silvestri dubbed it Trigona hypogea, and he also described their nests as being used for honey and pollen, although later researchers noted a surprising absence of pollen. Rather, biochemical analysis revealed the presence of secretions similar to those fed to queen bees in the nests of honeybees.

Then, in 1982, entomologist David Roubik of the Smithsonian Tropical Research Institute in Panama reported some surprising findings from his observations of Trigona hypogea colonies. Rather than gathering pollen from flowers, this species ingested the flesh of dead animals: lizards, monkeys, snakes, fish, and birds. Bees that stumbled on a tasty bit of rotting flesh deposited a trail of pheromones to call its nest mates, who typically converged en masse on the corpse within eight hours.

The vulture bees often entered a carcass via the eyes, similar to maggots, and Roubik made particular note of just how efficiently they could consume a carcass. A large lizard was reduced to a skeleton over two days, while the bees took just eight hours to remove all feathers and flesh from the head of a dead passerine. They reduced two frogs to skeletons in six hours. Because they fed on carrion rather than collecting pollen, this species had a distinctive hind leg, with a drastically reduced pollen basket compared to “vegetarian” bees.

The bees consumed the flesh on-site, storing a kind of “meat slurry” in their crops to bring back to the hive. Roubik hypothesized that, once at the hive, the bees converted that slurry into some kind of glandular substance, which they then stored in wax pots. “Considering animal flesh rots and would be unsuitable as stored food, its metabolic conversion is essential to allow storage,” he wrote. Another hypothesis, proposed in 1996, suggests that the actual flesh is what’s stored in the wax pots.

We now know of three distinct groups of vulture bees that exclusively get their protein from carcasses: the aforementioned Trigona hypogea, Trigona crassipes, and Trigona necrophages. These are stingless bees, but they have five large, pointed teeth, and they have been known to bite. Some excrete substances with their bites that can cause painful blisters and sores.

“These are the only bees in the world that have evolved to use food sources not produced by plants, which is a pretty remarkable change in dietary habits,” said Doug Yanega, a UCR entomologist who co-authored the new study. He and his colleagues wondered whether these vulture bees, given their radical shift in diet, had also evolved distinct microbiomes, and they conducted a series of experiments to find out.

The adult bees used in the experiments were collected at field stations in La Selva and Las Cruces, Costa Rica, in April 2019. Each site featured 16 “bait stations” with large chunks of fresh chicken suspended from branches with string. The string was coated with petroleum jelly to ward off ants, although a few particularly intrepid bullet ants managed to overcome that barrier. For comparison, the team also collected bees that fed on both meat and flowers as well as bees who fed exclusively on pollen.

Each bee was stored in a sterile tube filled with 95 percent ethanol. Because the specimens were so tiny, the entire abdomens were used for the microbiome analysis, except in the case of larger Melipona bees, whose guts were carefully dissected. That analysis revealed that the most extreme microbiome changes were found in the vulture bees that fed exclusively on meat. Those microbiomes had a lot of Lactobacillus bacteria, commonly found in fermented foods like sourdough, as well as Carnobacterium, known to help digest flesh.

“The vulture bee microbiome is enriched in acid-loving bacteria, which are novel bacteria that their relatives don’t have,” said UCR entomologist and co-author Quinn McFrederick. “These bacteria are similar to ones found in actual vultures, as well as hyenas and other carrion-feeders, presumably to help protect them from pathogens that show up on carrion.” The next step will be to learn more about the bacterial genomes, as well was those of the various fungi and viruses found in the vulture bees.

Even though the vulture bees had much smaller baskets on their hind legs, the authors noted, they were nonetheless able to use them to collect pieces of masticated chicken, much like their vegetarian cousins collect pollen. “They had little chicken baskets,” said McFrederick.

McFrederick, Yanega, and their colleagues suggest two hypothetical scenarios to explain their findings, noting that the two are not mutually exclusive. “The diet shift may have led to symbiont extinction and replacement of microbes that can break down carrion, or the core stingless bee microbiome may persist, suggesting that these microbes evolved along with the bee over its diet shift and are adapted to a new protein source,” they wrote.