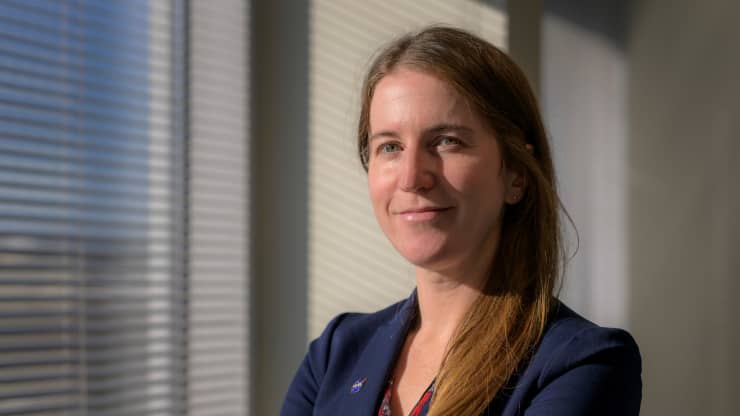 Katherine Calvin was appointed as NASA’s chief scientist on Monday. In an interview with CNBC, Calvin explains she wants people to think of NASA as a leading voice on climate science, not just space.

Among other goals, she hopes to make climate science easier to find online.

The new top scientist at the National Aeronautics and Space Administration wants the famed space agency to become a leading voice on climate change science, too.

“When people hear NASA, I want them to think of climate science alongside planetary science,” said Katherine Calvin, who was appointed as NASA’s chief scientist on Monday.

“All of the chief scientists of NASA have had specialty areas. Mine is climate,” Calvin told CNBC, speaking from NASA headquarters in Washington DC.

The agency already does a lot of scientific work that ties into climate change. Calvin’s role will be to connect NASA scientists with other scientists and to communicate their science outside of the agency.

“NASA is already a world leader in climate,” Calvin told CNBC. “And so I’m just communicating that science and connecting it to other agencies, to the public.”

NASA has more than two dozen satellites orbiting the Earth observing and measuring climate change variables, like changes in the oceans, clouds, and carbon dioxide levels. NASA uses this data to do climate modeling and prediction.

The climate change we see is the result of human activities — primarily burning fossil fuels — adding greenhouse gases like carbon dioxide to the atmosphere, where they trap more heat. Since about 1850, humans have raised atmospheric CO2 by nearly 50%. https://t.co/a9rYjkcezR pic.twitter.com/gp5KLKEGZ4

The agency also develops technologies that can be used to mitigate and adapt to climate change.

For example, NASA is working to make flights more efficient so they use less fuel and reduce greenhouse gas emissions, Calvin said.

Calvin’s will work to make the NASA’s climate data easier to find, so users don’t have to hop around to a bunch of different websites.

“These are large emissions, and we see quite a lot of them on the global scale, much more than we had expected.”

The specifics are still in the works. “But the idea is to get all the information that’s relevant in a place where people can find it,” Calvin said. She particularly wants to make sure NASA’s data is accessible to underserved communities.

New climate technologies give her hope.

“People are innovative, we flew a helicopter on Mars,” Calvin said. “There’s a lot of smart people at NASA and elsewhere, they’re developing technologies that can help us mitigate or adapt to climate change.”