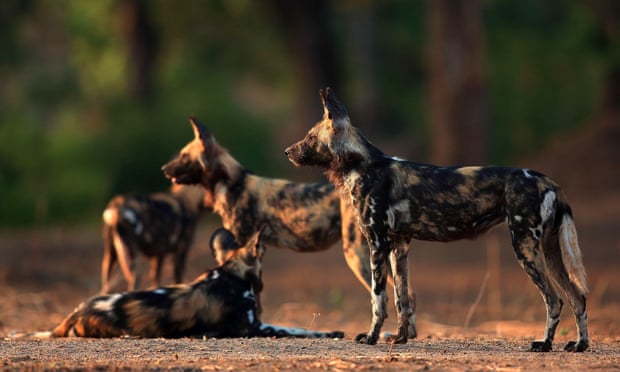 Wild dogs live in sub-Saharan Africa. In Southern Africa, the San tell a legend: moon declared that, just as he died and was reborn, people would be reborn. But hare would not believe this. Moon and hare fought – moon split hare’s lip, hare scratched moon’s surface – and moon took back his offer of rebirth. He also condemned hare to be forever on the run, chased by wild dogs.

I’ve seen wild dogs in Zimbabwe, at Mana Pools, where the dogs live in the shadow of the local elephants, who are famous for their habit of rocking their ponderous bodies on to their back legs to reach the tips of trees.

In a documentary about Mana’s wild dogs, David Attenborough narrates as the pups skitter back into their dens after watching a leaf-chewing elephant flump back down to earth.

Full story by Helen Sullivan at The Guardian