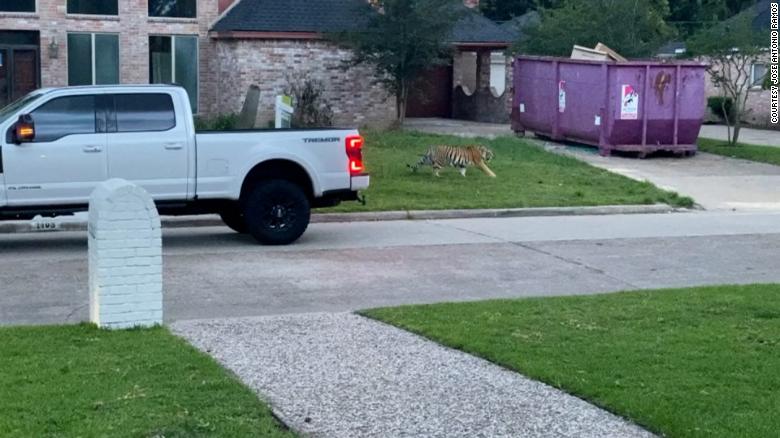 In recent days America has been captivated by the search for an escaped tiger in a Houston neighborhood. But the occurrence is not as exotic as one might think.There are more tigers in captivity in the United States than in the wild around the world, experts say.

The World Wildlife Fund estimates about 5,000 of the big cats live in captivity around the country, although animal welfare experts say precise numbers are hard to find. That’s compared to the roughly 3,900 wild tigers left in the world, experts estimate.

Most of the tigers in the US are held in backyards, breeding facilities and at small theme parks or roadside attractions, the WWF says. Only about 6% are at accredited zoos, the group says. “The United States has a responsibility to manage the staggering 5,000 estimated captive tigers within its own borders,” Leigh Henry, the WWF’s director of wildlife policy, told CNN.

The actual number of tigers in captivity in the US is probably higher because hundreds are bred each year as props for wild animal attractions, says Carole Baskin, founder of Big Cat Rescue, the Florida animal sanctuary made famous by the Netflix series “Tiger King.”

Private ownership of tigers and other big cats has long been criticized by animal advocates as reckless and inhumane. “Many of these private tiger owners aren’t properly trained to care for wild animals, making the animals vulnerable to mistreatment and exploitation,” the WWF said. “Often these facilities will allow public contact with the tigers, including photo ops and playtimes with tiger cubs.”

“No tiger belongs in a backyard or basement,” Baskin told CNN this week when asked about the missing tiger in Houston. “The only reason that people have tigers as pets is to try to show off to others.”

The Humane Society says a lack of uniform laws makes exotic animals easily accessible in many states. People must obtain a license from the US Department of Agriculture to own tigers for commercial purposes, although no such federal requirements exist for those who want to keep the animals as pets. With no umbrella federal law, possession of wild animals in the US falls under a patchwork of state regulations.