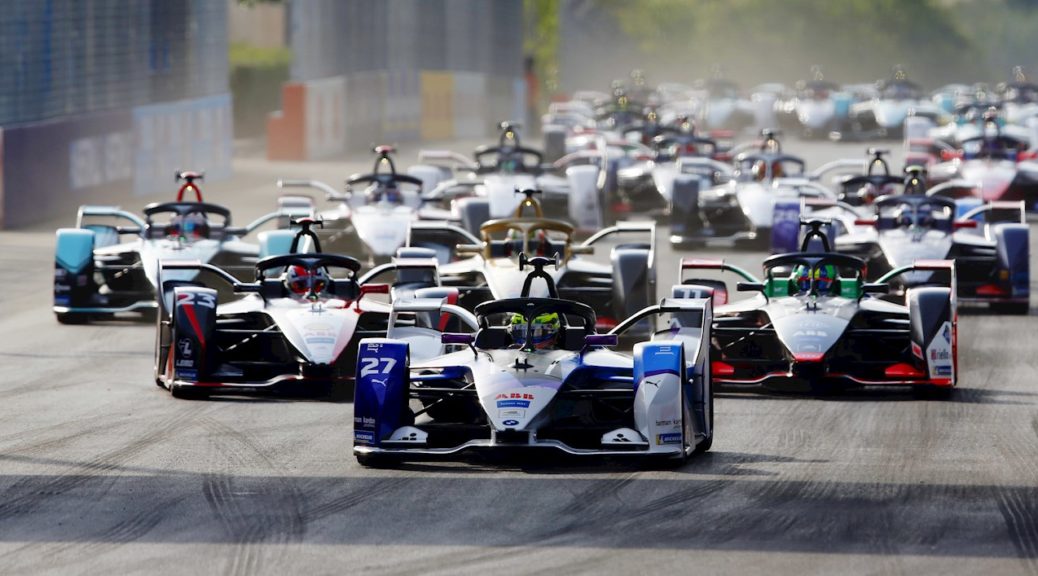 The ABB FIA Formula E Championship returns to New York City for another round of close combat, wheel-to-wheel all-electric racing. Watch 24 cars and drivers rip around the raw streets of Brooklyn in the shadow of Manhattan’s majestic skyline.

Formula E is set for a fourth trip to Brooklyn’s Red Hook neighbourhood and a fourth double-header in New York City on July 10 & 11, with the championship heading back to North America after a dramatic event in Puebla, Mexico last time out.

Edoardo Mortara (ROKiT Venturi Racing) flung himself to the top of the standings after following up a podium in the Puebla E-Prix Round 8 with a long-awaited return to the top step in Round 9 to take the Drivers’ World Championship lead with a huge 40-point haul.

Nick Cassidy (Envision Virgin Racing) steered to his first Formula E podium in the second race in Puebla and Audi Sport ABT Schaeffler‘s long wait for its first silverware of the year came to an end via a Lucas di Grassi–Rene Rast one-two in Round 8.

That all meant the championship table saw a shuffle with a number drivers joining the title battle, rather than any breakaways at the top.

In the race for FIA World Championship honours, 12 drivers now sit within 24 points – one race win – of Mortara at the head of the pack, where eight found themselves in the same bounds after Round 7 in Monaco. As the Puebla weekend showed, everything’s liable to change, and fast, in Formula E.

Mortara’s huge points haul means he’s the man with the target on his back in New York City. The Swiss-Italian went to Mexico 13th in the running and 30 points behind then-leader Robin Frijns (Envision Virgin Racing).

FANBOOST: Have your say on the outcome of the ABB New York City E-Prix! Vote now!

A torrid weekend and a non-score for the Dutchman in Puebla left the door open for those in the chasing pack to capitalise and it was the Venturi racer who did just that and holds a 10-point margin over Frijns who sits second. He’ll be hoping for better in New York and he’s every reason to be encouraged following his 2019 win in the city – his most recent in Formula E.

Reigning champion Antonio Felix da Costa (DS TECHEETAH) may have struggled to secure the results they’d have hoped for in Mexico, but both he and double title-winning teammate Jean-Eric Vergne left relatively unscathed, in pretty much the same situation as they’d arrived.

It was a net gain for the champion despite his struggles, with the Portuguese sitting third. Vergne finds himself 10th, after he was unceremoniously removed from the running in contact with Nyck de Vries (Mercedes-EQ) in Round 8 and lost control of his own accord, tumbling down the order before recovering to eighth, in race two.

Audi’s one-two saw Rast fire himself into fourth in the standings, Jaguar Racing‘s Mitch Evans is fifth after a double points-score last time out, while de Vries currently places sixth having led the Drivers’ running heading into Round 7 in Monaco after a measured victory in the DHL Valencia E-Prix Round 5 and that storming opening-round drive in Diriyah.

SYNC: Don’t miss a minute of the 2020/21 campaign, sync your calendar for all the latest

The circuit winds its way around the Brooklyn Cruise Terminal site in the heart of the Red Hook neighbourhood of Brooklyn. It’s a real test; lined with miles of unforgiving concrete, with views across the Buttermilk Channel and over towards Lower Manhattan and the Statue of Liberty.Drivers will have to get their head around the revised ATTACK MODE activation zone to negotiate, though, with the loop moved from the exit of Turn 5 to the outside of Turn 10 this year.

The city has set a net-zero carbon emissions target for 2050, with an 85 per cent reduction on greenhouse gas emissions by the same date on 1990 levels enshrined into law.

Governor Andrew Cuomo also announced the ‘EV Make Ready’ programme in 2020 to drive New York to its goal. This will see 850,000 zero emissions vehicles and 50,000 charging stations in the state by 2025.

New Yorkers consume less total energy per person than the residents of any other state in the US, except for Rhode Island.