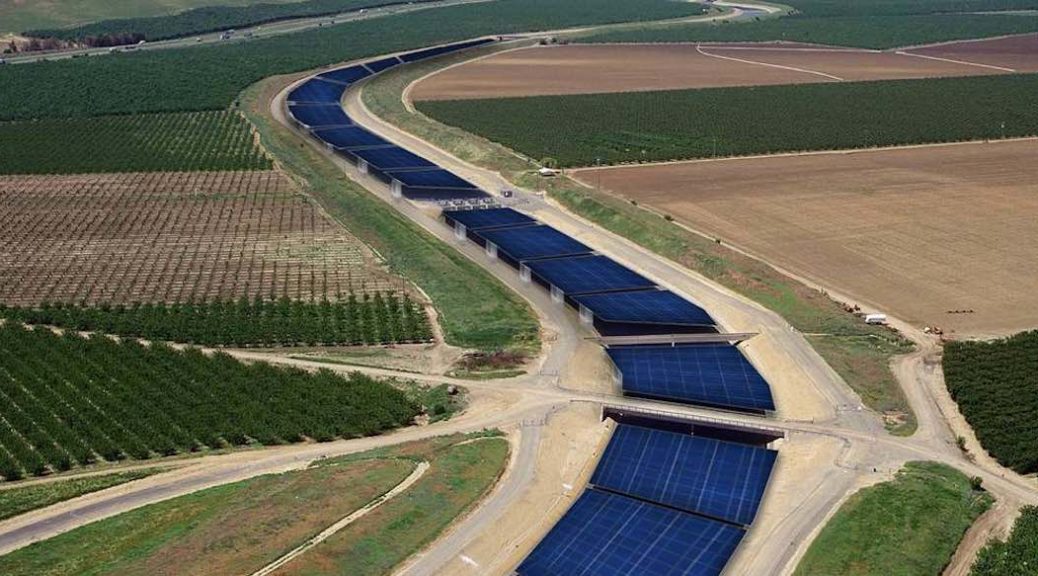 In an interview, famed astronomer Neil DeGrasse Tyson explained that we already have flying cars, in a way, because tunnels and overpasses allow cars to access the third dimension.

By that logic, India has invented ‘flying solar panels,’ which are being suspended above irrigation canals to cut down on the evaporation of precious water droplets by providing shade from the sun’s evaporating heat. It’s also a clever way to cut down on habitat loss, too, by placing panels in already-dedicated man-made spaces.

Now, California is eyeing the benefits derived from several successful canal installations in India. With the world’s largest irrigation canal network, and 290 days of average sunshine, California is uniquely positioned to ease its own severe water shortages with this emerging innovation of canal-covering solar farms.

UC Santa Cruz has investigated this method for use in California and estimates that—on top of generating green energy—it would save 63.5 billion gallons of water from evaporation annually, a massive windfall for a state that sometimes rations water and which regularly suffers from droughts.

However the story begins in the Indian state of Gujarat in 2014, when a pilot project covering 750 meters of canal space led to the creation of an entire canal-topped solar plant in Vadodara District, and another one totaling 100 megawatts off the Narmada River.

Researchers in India found that the water running beneath the panels cooled them, too, preventing overheating and resulting in an average efficiency increase of between 2-5%.

Brandi McKuin and her colleagues at UCSC wanted to model the pros and cons of covering the Golden State’s 4,000 miles of canals in solar panels, including using three separate techniques to measure water savings, and choices of construction methods that would be the most efficient to scale. (The most value conducive method of construction was thought to be steel cables.) Their results published in Nature Sustainability model a sunny future.

Furthermore, the state uses diesel-powered water pumps to drive the flow of the canals, which could be replaced to the tune of 15-20 generators per megawatt of solar.

Roger Bales, a coauthor on the paper put it simply, saying, “This study is a very important step toward encouraging investments to produce renewable energy while also saving water.”

Watch a video from Punjab, India, where REC solar panels suspended by cables above canals are saving 73 million liters of water which are channeled to local farms, while generating 8.4 million kW of energy annually since 2017.