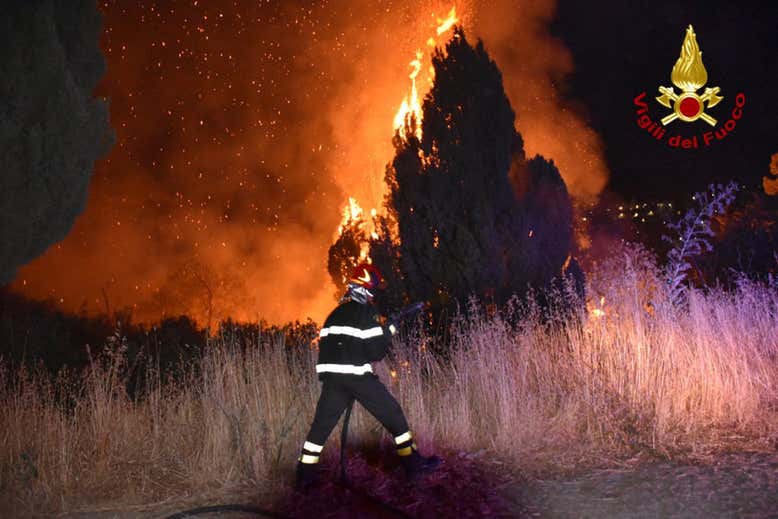 The highest temperature ever recorded in Europe was provisionally reported on 11 August. The town of Syracuse on the Italian island of Sicily reached 48.8°C, 0.8°C higher than the previous European record.

High temperatures are also being recorded elsewhere. In Tunisia, the capital Tunis hit 49°C on 11 August according to Reuters, more than 2 degrees higher than the previous record of 46.8°C in 1982.

These record extreme temperatures across a swathe of southern Europe and northern Africa are almost certainly a result of global warming. The hot and dry conditions have led to many devastating fires. Italy has declared a state of emergency, and in Greece thousands of people had to be evacuated from the island of Evia as flames spread. The immediate cause of the heatwave is a ridge of high pressure over the Mediterranean, forming what is known as a heat dome.

“Record-breaking temperatures in June 2019 saw the French temperature record exceed 45.0°C for the first time, and our analysis found that event was five times more likely because of climate change. Although we haven’t yet been able to run an in-depth study on the current situation, I think it’s going to be clear that climate change has made this current event more extreme,” said Peter Stott at the UK’s Met Office in a statement.

The previous record for Europe, according to the World Meteorological Organization, is 48°C in Athens in 1977. The new record has to be validated by the WMO before it becomes official, which means checking that the local weather station is accurate and correctly set up.

Maximiliano Herrera, who monitors extreme temperatures around the world, told The Washington Post that the weather station has high-quality instruments and is well-maintained, suggesting the record will be confirmed.

The world has warmed by 1.09°C above 1850 to 1900 levels, according to the Intergovernmental Panel on Climate Change (IPCC) report out earlier this week. This warming is making extreme weather such as heatwaves happen more often, and also making such events more severe.