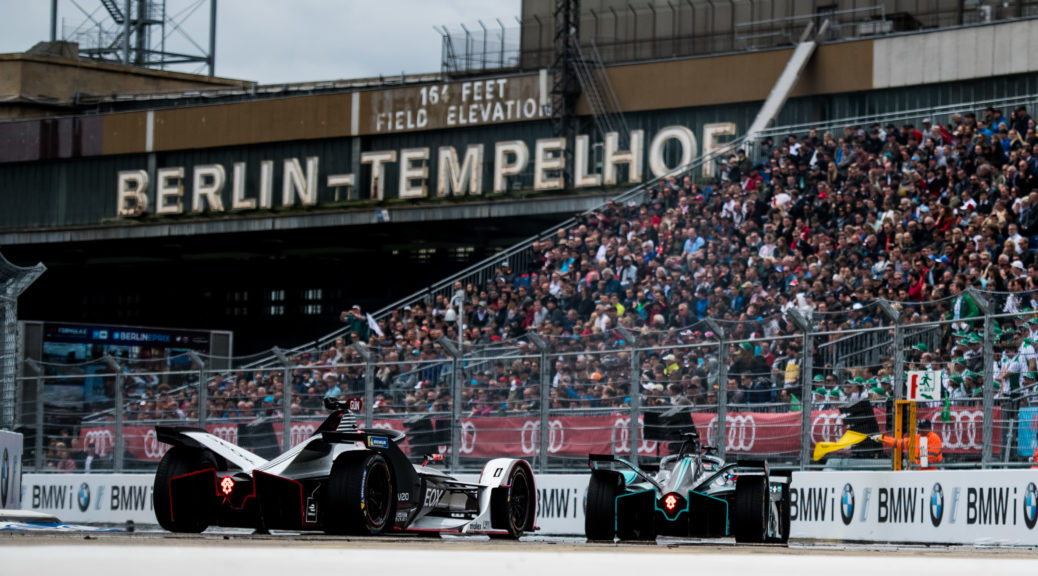 The 2020/21 ABB FIA Formula E World Championship reaches its climax this weekend (August 14 & 15) with a double-header at Tempelhof, for the BMW i Berlin E-Prix presented by CBMM Niobium – and the prize on offer is maiden FIA World Championship honours.

With two rounds left to run there are 18 drivers still in mathematical contention for the Drivers’ World Championship, illustrating just how hard fought, unpredictable, and competitive this season has been, even by Formula E’s standards.

Twelve teams, 10 manufacturers and a grid full of world-class racers have traded blows all year. Ten drivers have climbed the top step of the podium, every driver has scored a point and there’s nothing to split the lead group after 13 rounds.

Mercedes-EQ’s Nyck de Vries heads the way with a narrow six-point lead over Robin Frijns (Envision Virgin Racing) after a pair of second-placed finishes in London while the pacesetter heading into his home E-Prix, Sam Bird (Jaguar Racing), sits third, level with fellow Brit Jake Dennis (BMW i Andretti Motorsport) in the points table after a second race win for the rookie last time out at the ExCeL Circuit.

Reigning champion Antonio Felix da Costa (DS TECHEETAH) is primed and ready to pounce in fifth, within 15 points of Dutchman de Vries as he seeks to retain his crown.

One win could change everything in the Teams’ table, too, with Envision Virgin Racing leading the way from the manufacturer might of Mercedes-EQ and Jaguar Racing by seven and nine points, respectively. Teams’ incumbents DS TECHEETAH are waiting in the wings 17 points back from the leaders.

Can de Vries drive home his slender advantage? Will experienced head Sam Bird finally hit the top? What are the odds on rookie Dennis signing off BMW’s spell in Formula E in the best possible fashion? Or, is da Costa set to make it a double having scored 91 points – the equivalent of six third place finishes on the bounce – in that six-race Season 6 finale at Tempelhof?

Don’t discount the guys that have been there before just yet, either. 2016/17 champion Lucas di Grassi (Audi Sport ABT Schaeffler) will be hungier than ever with the aim of seeing Audi leave Formula E on a high and both he and double champ Jean-Eric Vergne (DS TECHEETAH) – two of the most successful drivers in Formula E history – find themselves outside the top 10 but with favourable qualifying groups.

With 29 points available in each of Rounds 14 and 15, there will be plenty of twists and turns before the destination of top honours is decided on Sunday afternoon.

It was not all that long ago that Mercedes-EQ’s Team Principal Ian James admitted his team had ‘failed massively’ in keeping their consistency following their early dominance this season.

However, James and his team will be rejuvenated following a double podium in London courtesy of now World Championship leader de Vries. The 26-year old holds a six-point lead heading into the double-header finale in Berlin over his compatriot Frijns, who last week extended his stay at the team for the 2021/22 season.

The net zero carbon race series returns to the 2.4km Tempelhof Airport Street Circuit on the outskirts of the German capital city. Tempelhof featured a remarkable six races on three different track layouts across in nine days in what was surely the most intense season finale in motorsport history last year to round out Season 6.

Two different configurations will be used over the weekend with Saturday’s race using the traditional anti-clockwise direction and Sunday switching to clockwise – a first for Formula E over a double-header event.

There will be a welcome return for fans, too, as the E-Prix will be open to the public for the first time since the start of the global pandemic, with more than 10,000 General Admission grandstand seats available thanks to a rigorous safety and hygiene protocol established between Formula E organisers and the Berlin authorities.

Berlin is an exceptionally green city and is a leader in sustainability. Not only is it green in its practices, but some 30% of the city comprises of green space, parks and woodland for an idyllic big city feel.

The city’s senate has invested more than 30 million euro in its cycling infrastructure in 2020 alone, quadrupling its outlay from 2016, making it easier than ever to transit the city on a bike – a contributor to Berlin’s ‘good’ air quality index rating.

The city’s energy consumption per year in its built space has almost halved in the last 20 years, reducing from 150kWh to 80kWh per square metre in 2020. It’s also ranked as the most energy efficient city in Europe in terms of its residential building infrastructure.

Berlin leads the way in recycling initiatives too, with citizens due 0.25 euro for every bottle they recycle, working in addition to Germany’s complete ban on single use plastic in July this year. Grey water is routinely reused after filtration to feed green spaces and rooftop gardens.

Formula E blurs the lines between the real and virtual worlds of motorsport and there are even more opportunities to engage with the championship in Season 7, even if you can’t be at an E-Prix in person.

Formula E is the only motorsport in the world that lets fans play an active role in influencing the outcome. FANBOOST for Round 14 opens on August 9 until 15 minutes into the encounter, while voting for Round 15 opens shortly after Round 14 has finished. To give your favourite driver an extra boost of power, visit FANBOOST and the Formula E app.

Can you predict the unpredictable? The Formula E Predictor puts you in the hot seat to predict each round of the ABB FIA Formula E World Championship.

It’s free to play, and points are awarded for each correct prediction. Make your picks for five race outcomes – selecting from the 24 Formula E drivers that you think will win the E-Prix, clinch Julius Baer Pole Position, set the TAG Heuer Fastest Lap, be the first to use ATTACK MODE and be the driver to make up the most places in the race.