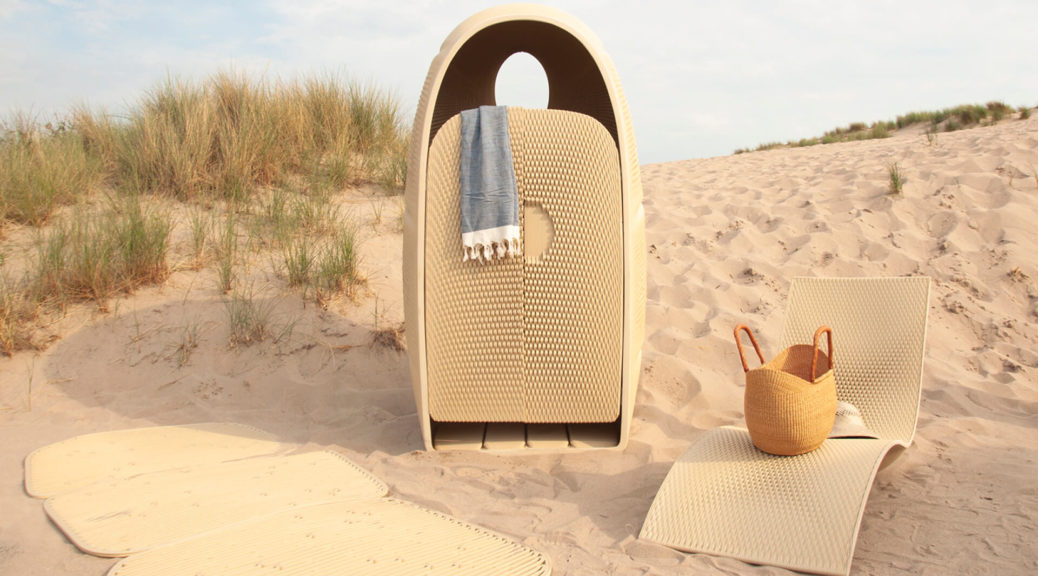 Through the means of robotic 3D printing and marine plastic waste as the raw material, Dutch architects Panos Sakkas and Foteini Setaki have designed a limited-edition collection of beach furniture titled ‘The Elements’. As suggestive of the moniker, the collection comprising a fitting room, a footpath, and a sunbed, draws inspiration from the diversity of elements characteristic to the shore – “the carcasses of marine organisms, and saltation patterns on the sand and the waves”, to list a few. The soft sculptural forms come in two colours – aqua and sand – and a materiality focused on both visual and ergonomic comfort.

The project by Rotterdam-based studio, The New Raw, follows the practice’s larger goal of seeking to give a new life to discarded materials through mediations of design, robotics, and craftsmanship. Each object is crafted from 80 per cent recycled plastic and designed to be 100 per cent recyclable, rendering itself as a promising (in contrast to the common association of plastic waste) raw material for future interventions.

“Plastic is a major contributor to the pollution of the seas. However, living in urban regions, we tend to forget about our dependence on the sea that is related to food and oxygen supply,” says Sakkas and Setaki in an official statement. The duo arrived at the design through a rigorous ‘form follows process’ approach in which digital manufacturing gave shape to a refreshing visual language and a unique ergonomic design. The wavy forms that easily blend with the topography of beaches reveal 3D encoded textures, which as per the architects “act equally as ornament and as functional components to achieve climatic comfort during use, natural air ventilation, light irradiation, water drainage and cooling”. A programmed robot movement sculpted the forms layer by layer, bringing together a striking display of colours, textures and geometries; the engineered input minimised the printing and assembly time.

Originally designed for Coca-Cola in Greece, the collection over the last few months was presented at six different locations in the country and has upcycled over 720 kg of plastic waste. The locations include Chania beach on the islands of Crete, Elli beach in Rhodes, and Glyfada closer to the Attica region.

With a philosophy that prioritises circular design and ‘making with waste’, The New Raw sets out to redefine “how we see and experience waste”. The studio employs decentralised systems in which local plastic waste is used as a material resource for projects. The practice is rooted in the idea that this could help achieve a sustainable future for coastal and remote areas in which local production can benefit from global design thinking and can act independently of global material supply chains.