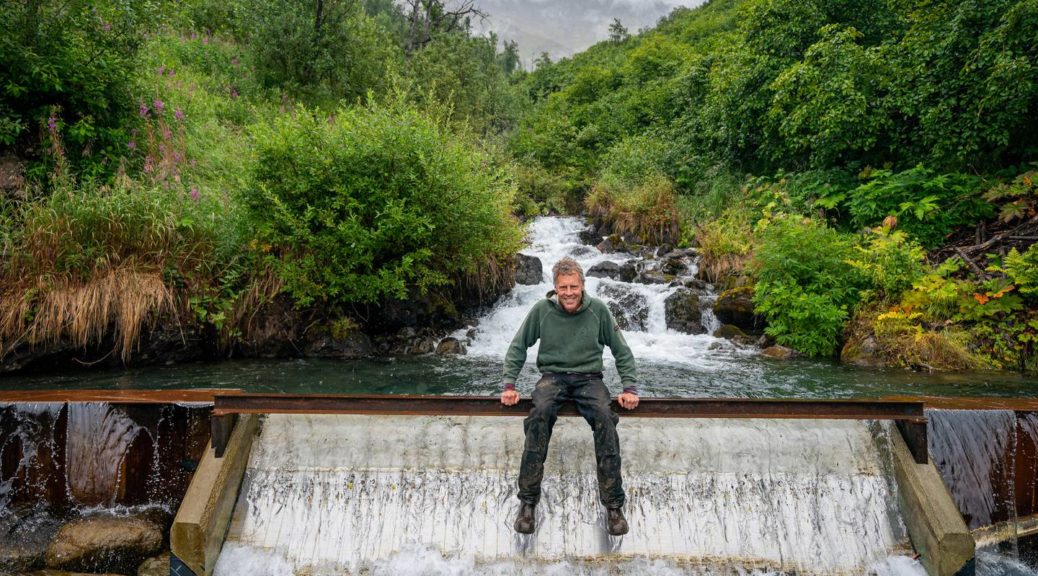 An Anchorage hydrologist recently flipped the switch on a state-of-the-art hydroelectric system that he built on his mountainous property near Ram Valley, above Eagle River.

The Juniper Creek Hydroelectric Project began delivering power to homesin the area on July 24, through a connection with the Matanuska Electric Association.

Dave Brailey began dreaming up the $1.7 million project more than a decade ago. His wife, Melanie Janigo, and another couple are part-owners in the project and the land it sits on.

Brailey did the planning and most of the physical work, with occasional help from family and friends. He hired a civil engineer to oversee the project,and other experts for specialized work. He paid a helicopter company to fly in materials like large sections of pipe.

The 300-kilowatt project lies in a brushy gorge below Raina Peak, close to 2,000 feet above sea level.

A spillway diverts some of the water from the creek. An 18-inch pipe collects the water and drops it nearly a quarter mile, mostly underground, to a computer-run powerhouse that feeds electricity into power lines.

At its peak in summer, Juniper Creek Hydroelectric will provide power for more than 300 homes, Brailey said. At its low point in May, it will power about 50 homes.

“I’ve always thought we need to do something about carbon emissions, and this sort of became my purpose in life, to make something for my children and for humanity going forward,” said Brailey, 60.

He said the project will pay for itself in about 15 years and produce electricity for generations.

A layman who learned

Brailey said he’s a layman when it comes to renewable power projects.

But he’s worked as a hydrologist in Anchorage for 35 years, including as a self-employed consultant most of that time.

In 2005, he and his wife bought the 160-acre former homestead property, along with their friends, Stephen and Ilysa Parker.

They wanted it for its access to backcountry skiing and hiking.

But Brailey spent several years studying the hydropower prospects on the land, and penciling out other details that led to the project.

Brailey received 14 permits from Anchorage, state and federal authorities, and construction began in 2018.

At times, he spent long periods at a cabin on the land, away from home, Janigo said.

“I lost my husband for several years” to the project, she said.

Juniper Creek Hydroelectric never won grants from state and federal agencies, though Brailey applied, he said. He called that “disappointing.”

The couples often spent money from their retirement accounts, he said.

“We just kept paying bills as we went,” he said.

But it’s unique, in part because one person had the vision and drive to make it happen, rather than say, an engineering firm or a group of engineers, he said.

The cooperative utility, with more than 50,000 members, has connected two other similar hydropower projects onto its grid, utility officials said. This is the first in several years.

More people are taking steps to generate their own renewable power, they said. Some sell power to the utility, including some homeowners with rooftop solar panels. Other projects like Brailey’s are much bigger, such as Alaska’s largest solar panel project in Willow, they said.

“We are really open to having new and innovative kinds of power on our system,” said Julie Estey, a spokeswoman with the utility. “We are pretty agnostic to what the technology is, we just want it to be reliable and cost-effective for our members.”

It won’t affect prices paid by utility customers, he said.

Juniper Creek Hydroelectric is a run-of-river system. It essentially borrows some of the water from the creek before returning it, without impacting downstream fish resources like a dam would, Brailey said.

“The water is with us for two minutes, then it goes back into the creek,” he said.

The Alaska Department of Fish and Game decided a permit to protect fish habitat wasn’t needed, he said.

“Because there are no fish present, they determined it was not required,” Brailey said.

David Schade, director ofthe state Division of Agriculture, said he lives along Falling Water Creek in Eagle River. The creek gets some of its water from Juniper Creek.

He said the project hasn’t affected the creek along his property at all.

Schade was president of the Eagle River Community Council when the project came before the council about three years ago. Some residents initially opposed it, he said. But resistance subsided as people realized it wouldn’t have downstream effects and would be inconspicuously tucked into a gorge, he said.

“They designed it in an economic, ecofriendly (way),” Schade said.

During a tour of the project for a reporter on Friday, Brailey said he was careful to protect Juniper and Falling Water creeks.

“Some people didn’t like it because I would take away the stream,” he said. “But the stream is still here.”

“I took a lot of pains in the project to save stuff like that,” he said, gesturing to a waterfall.

He said a solar-powered radio communications system allows the power to be shut off remotely if there’s an emergency or other need.

Brailey said there appear to be several other opportunities for similar small-scale hydropower projects in the municipality, many of them between Eagle River and Girdwood, based on hydrology reports and his own research.

“It’s worth further investigation,” he said.

Part-owner Stephen Parker, a retired emergency room doctor, said he was skeptical of the project early on. But he never doubted his friend would complete it.

“He had the trained eye and experience to see the potential, and the stamina, willpower and determination to see it come to fruition,” he said.