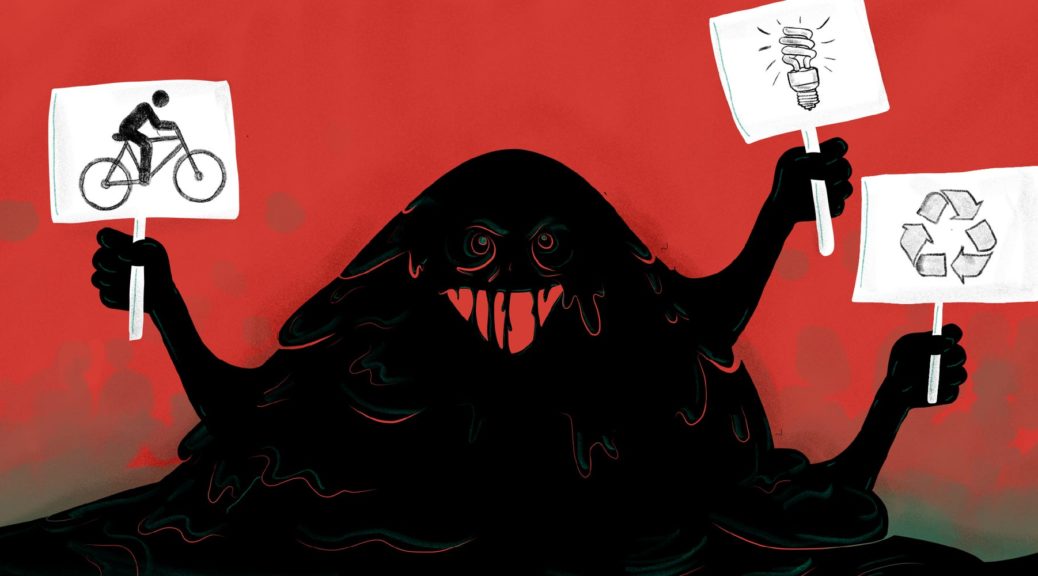 Activists and researchers say this individual-action narrative distracts from the biggest polluters.

Ben Franta is trying to collect every climate-related ad the oil and gas industry has ever produced.

Franta, who is pursuing a law degree and PhD at Stanford, is among a small cohort of researchers who track fossil-fuel industry propaganda. These historians, social scientists, and activists have documented the extent to which major oil companies knew their products were changing the climate as early as the 1960s, and how they poured tens of millions of dollars into sowing doubt about the science through the 1990s.

“Not to get too tin-hat-y, but once you start to see these ads over and over again, you see the common elements arise,” Franta told Insider.

So it was clear to him that around the year 2000, fossil-fuel companies changed marketing tactics. After decades of denial, they pivoted to blaming the climate crisis on you and me.

Franta pointed to a 2007 Chevron ad campaign called “Will you join us?” Each poster featured a person’s face and a pledge — promises like, “I will leave the car at home more” and “I will finally get a programmable thermostat.” In small print, Chevron describes its own initiatives to be energy-efficient.

On the campaign’s now-defunct website, users could even make pledges like carpooling to work a few days per week, and a calculator would tell them how many DVDs they could watch with the energy saved.

“The framing is: ‘No, we the companies are the good ones. We’re working on the problem and we want you, the consumer, to join us in our positive efforts,'” Franta said.

This approach — telling people to solve a crisis by changing their own habits — is a tried and true corporate tactic, pioneered by the tobacco and plastics industries. Now, fossil-fuel giants like Chevron, BP, and ExxonMobil have spent millions to convince the public that consumer choices and lifestyle changes will solve the problem.

“It’s almost become natural, when people think about the climate crisis, to think of individual action,” Denali Nalamalapu, a communications specialist for the climate organization 350.org, told Insider. “Which is super convenient for fossil-fuel corporations.”

But at this point, personal lifestyle changes will not turn the climate crisis around. A report from the International Energy Agency, which lays out a path to a net-zero-emissions energy system by 2050, estimates that individual behavioral changes would only account for about 4% of the necessary reductions.

To have even a 50% chance of stopping the world’s temperature from rising more than 1.5 degrees Celsius, according to a study published this month, 90% of coal and 60% of oil and gas reserves must stay in the ground.

A blame campaign: litterbugs and recyclers

In 1971, TVs across the US blasted a heart-wrenching PSA. In it, an actor in ambiguous American-Indian garb, his hair in two long braids, climbs into a canoe and paddles across a river full of discarded newspapers. He passes an industrial barge. Smokestacks puff in the background. He pulls his canoe onto a garbage-strewn shoreline and climbs to a busy highway. A passing motorist chucks a bag of fast food at his moccasined feet.

“People start pollution. People can stop it,” a narrator says as the actor looks into the camera, a tear rolling down his cheek.

This “Crying Indian PSA,” as it’s now known, came from a nonprofit called Keep America Beautiful — a group funded by companies like Coca-Cola, PepsiCo, and Dixie Cups. It debuted at a time when single-use packaging lined streets, beaches, and parks, and environmental activists had begun to rail against plastic pollution.

“That was an intentional, well-funded effort to convince us all that the responsibility for pollution was on us, on individuals, on litterbugs, rather than the companies that were flooding the world with single-use packaging,” John Hocevar, a marine biologist who leads Greenpeace’s oceans campaigns, told Insider.

The tobacco industry did something similar in the 1950s, hiring PR firms to create campaigns blaming smoking-related illness on smokers. But the plastics industry took the strategy further.

As local governments considered banning single-use plastics, a council of plastic-producing companies — including Chevron, Exxon, Dow, and DuPont — spent millions to implement recycling programs across the US. Their own scientists, however, had told them that recycling wouldn’t work on a large scale, according to an investigation by PBS and NPR.

“Making recycling work was a way to keep their products in the marketplace,” Ron Liesemer, a former Du Pont manager who led the effort, told PBS and NPR. “It improves the image of the material.”

By 2015, the quantity of plastic produced each year had increased 10-fold from 1971. Less than 10% of that material has ever been recycled. Each square kilometer of ocean contains an average of about 13,000 pieces of plastic.

Microplastics — fragments smaller than a fingernail that never fully break down — have been found in the Mariana Trench and at the top of Mount Everest. The average American ingests about 50,000 microplastic particles each year and inhales about the same amount.

Plastic production is expected to double by 2040 and triple by 2050, according to the World Economic Forum.

“Just about everybody understands that we need to do something about plastic,” Hocevar said. “The challenge is that many companies — well, most companies — and many politicians are still thinking in this personal-responsibility frame and putting the emphasis on individual consumers. And so that really keeps the conversation focused on solutions that can’t solve the problem.”

Exxon was on the council that led the charge for recycling, and it soon started promoting personal-responsibility solutions to another crisis: global warming.

“Be smart about electricity use,” suggested a 2007 ad from the company (now ExxonMobil). “Heat and cool your home efficiently.” “Improve your gas mileage.”

“They talk about energy demand, they talk about need, they talk about use, and they use the term ‘consumers.’ And this is basically a way of shifting responsibility away from the producers — that is to say them, ExxonMobil — and onto the consumer,” Oreskes told Insider.

In a recent study, Oreskes analyzed 180 ExxonMobil documents discussing climate change from 1977 to 2014. The set includes internal communications, peer-reviewed publications, and “advertorials” — ads that looked like editorials and ran in The New York Times.

“The carbon footprint calculator then took off as an idea and as a concept, and really distracted us from looking at the industry itself,” Janet Redman, the director of Greenpeace USA’s climate campaign, told Insider.

Nalamalapu said she calculated her carbon footprint as one of her first climate-change lessons in elementary school. So did I. By 2010, the popularity of the phrase “carbon footprint” had increased by about 1,600% from 2006.

Climate scientist Peter Kalmus told ProPublica about how much he took this idea to heart. To reduce his carbon footprint, Kalmus has raised chickens in his yard, converted an old car to biodiesel, and built an outdoor toilet to compost his family’s poop. He’s had nightmares about plane rides.

“It feels like the plane is flying on ground-up babies to me,” Kalmus told ProPublica.

In statements to Insider, spokespeople for Chevron, BP, and ExxonMobil pointed to their companies’ efforts to reduce emissions.

“Chevron is investing more than $3 billion from now to 2028 to advance the energy transition,” Chevron spokesperson Sean Comey said. “Chevron believes the world’s demand for oil and gas should be supplied by the most efficient, least carbon-intensive producers.”

Comey also said the company is working to reduce emissions from its oil and gas extraction and is exceeding the goals it set for itself for 2023. He said that although “too much plastic waste ends up in landfills, oceans, and rivers,” plastics “are essential to modern life and help improve the quality of life for millions of people around the world.”

BP declined to comment on the company’s carbon-footprint calculator, but pointed to its net-zero goals and a recent acquisition of solar-energy projects, which it aims to more than double by 2025.

“BP believes we have an important role to play in addressing climate change,” spokesperson Joshua Hicks said. “That’s why we launched a new ambition last year to become a net-zero company by 2050 or sooner, and to help the world get there too. In line with that ambition, we’ve set targets for drastically reducing our emissions and increasing our low-carbon investments, and we’re actively advocating for policies that support net zero.”

ExxonMobil, meanwhile, said it “is working to reduce company emissions and helping customers reduce their emissions while working on new lower-emission technologies and advocating for effective policies.”

The company alleges that Oreskes has a conflict of interest, pointing to her expert testimony in a climate-related lawsuit last year.

“This research is clearly part of a litigation strategy against ExxonMobil and other energy companies,” a statement shared by spokesperson Casey Norton said.

Oreskes said she has offered expertise “in a number of capacities to groups and organizations involved in fighting climate change,” and does not see any conflict of interest.

BP still advertises its calculator today. One of its subsidiaries backs an app that tracks your carbon footprint in real time, Grist reported. BP also made its biggest acquisition in 20 years in 2018: $10.5 billion of west Texas oil fields.

“They don’t want a price on carbon, they don’t want incentives for renewable energy, they don’t want to block new fossil-fuel infrastructure,” atmospheric scientist Michael Mann told Insider. “So they say: ‘No, it’s just about you being a better person, you being more responsible in your day to day activities.'”

A Chevron lawyer even said as much in federal court, according to Grist: In 2018, the company argued that it’s not oil production causing climate change, “it’s the way people are living their lives.”

The ads Oreskes and Franta have collected show how much money fossil-fuel interests have poured into influencing the narrative on climate change. The American Petroleum Institute, a fossil-fuel trade association, spent $663 million on PR and advertising between 2008 and 2017, according to a report from the Climate Investigations Center.

The results, Redman said, can be insidious.

“It’s easy to see that rhetoric, that it’s about individual responsibility, and feel paralyzed and not take the kinds of political action that we need,” she said.

The stakes are only getting higher, according to the latest report from the UN’s Intergovernmental Panel on Climate Change. For every half-degree of warming, the frequency and intensity of heat waves and droughts increase. Even in the best-case climate scenario, sea levels will rise nearly a foot over the next 80 years.

Still, if you’ve dedicated time and energy to recycling or biking to work — don’t despair. These choices, if lots of people make them, can make a difference. Nalamalapu takes reusable bags to the grocery store. Mann drives a hybrid car and doesn’t eat meat. Oreskes has solar panels on her roof.

“Riding our bikes is important. And turning off the lights, not cranking the AC with a window open, all that stuff is really important, for sure,” Redman said. “But it pales in comparison to political activity to change the rules about how our energy system is structured, who the actors are, who benefits, who pays.”