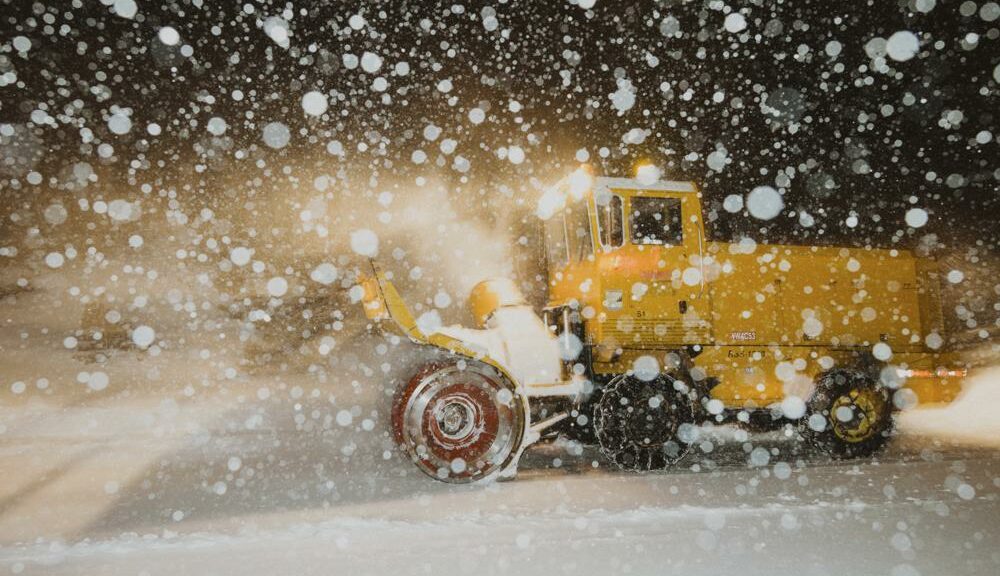 Motorists spun out on whitened mountain passes and residents wielded umbrellas that flopped in the face of fierce winds as Northern California absorbed even more rain and snow on Monday, bringing the possibility of rockslides and mudslides to areas scarred by wildfires following an especially warm and dry fall across the U.S. West.

Kirkwood Mountain Resort was closed Monday, saying on social media that it was not safe to open with 17 inches (43 centimeters) of overnight snow and high winds. A California Highway Patrol car in Truckee nudged a big-rig up a snowy hill while smaller vehicles spun out, resulting in minor bumps and bruises but no real injuries, CHP Officer Carlos Perez said.

“It’s just so bad and so thick,” he said of the snowfall, with more expected Monday night. “We’re telling people that if they don’t need to be around this area, they probably shouldn’t travel.”

The multiday storm, a powerful “atmospheric river” weather system that is sucking up moisture from the Pacific Ocean, raised the threat of flooding and was expected to dump more than 8 feet (2.4 meters) of snow on the highest peaks in California and Nevada and drench other parts of the two states before it moves on midweek, forecasters said.

The storm will bring much needed moisture to the broader region that’s been gripped by drought that scientists have said is caused by climate change. The latest U.S. drought monitor shows parts of Montana, Oregon, California, Nevada and Utah are classified as being in exceptional drought, which is the worst category. 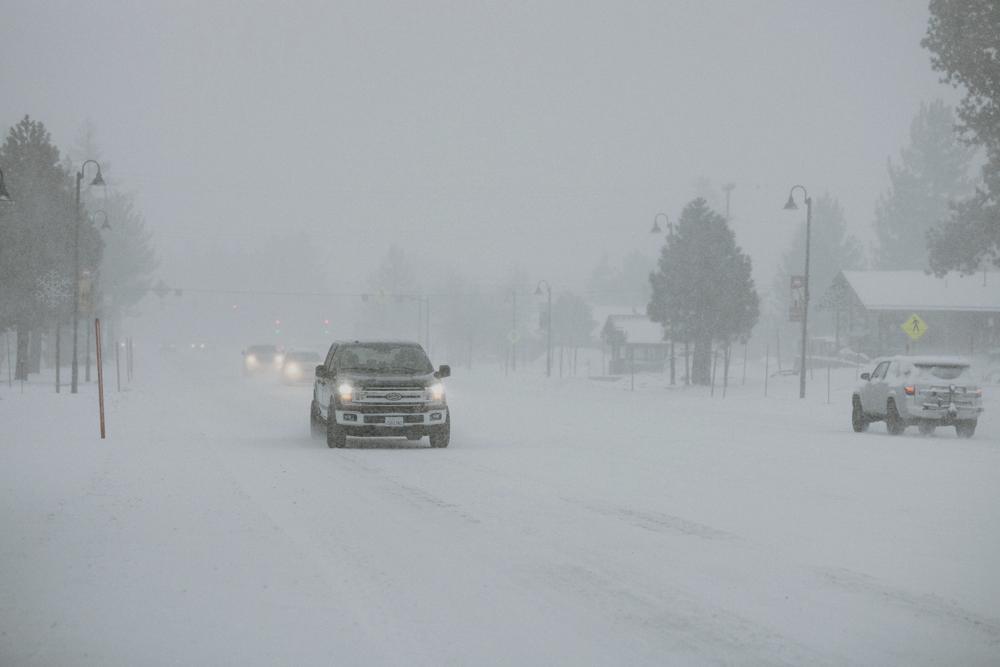 In this photo provided by the Mammoth Mountain Ski Area, fresh snow covers the road to the Mammoth Mountain ski resort in Mammoth Lakes, Calif., on Monday, Dec. 13, 2021. Forecasters say the state's highest peaks could get as much as 8 feet of snow while lower elevations across California are in for a serious drenching of rain. The storm is expected to last days before moving out, but another storm is on the way. Forecasters warned people in mountainous areas to prepare for days of snowfall and possible road closures. (Peter Morning/Mammoth Mountain Ski Area via AP)

Most western U.S. reservoirs that deliver water to states, cities, tribes, farmers and utilities rely on melted snow in the springtime.

This week’s storm is typical for this time of the year but notable because it’s the first big snow that is expected to significantly affect travel with ice and snow on the roads, strong winds and limited visibility, said National Weather Service meteorologist Anna Wanless in Sacramento.

“Most of California, if not all, will see some sort of rain and snow,” she said.

Meanwhile, gusts were so strong in and around San Francisco that state transportation officials issued a wind advisory for the Bay Bridge connecting the city to Oakland and warned drivers of campers and trailers to avoid the 4.5-mile (7.2-kilometer) span late Sunday.

“I decided to stay home today and not go anywhere, which is nice,” she said. “And I’m really happy for the rain. I think we needed it a lot.”

The storm prompted officials to shut down a 40-mile (64-kilometer) stretch of the iconic Highway 1 in California’s Big Sur area until Tuesday. The scenic coastal route south of the San Francisco Bay Area, frequently experiences damage during wet weather.

Nearby Monterey County residents who live close to burn scars from last year’s Dolan Fire were warned to be prepared to evacuate if rains loosen hillsides and cause debris flows while in Southern California, Los Angeles County fire officials urged residents to be aware of the potential for mud flows.

In coastal Santa Barbara County, residents of mountain communities near the Alisal Fire burn scar were ordered Monday to evacuate over concerns that heavy rains might cause flooding and debris flows that could inundate hillside homes. Officials didn’t say how many people were affected by the order. A similar order was issued for people living in several communities near another burn scar in the San Bernardino Mountains, more than an hour’s drive east of Los Angeles.

Forecasters said strong winds accompanying the storm could lead to power outages. Karly Hernandez, a spokesperson for Pacific Gas & Electric, said crews and equipment are staged across the state to respond if the power goes out.

The second storm predicted to hit California midweek shortly after the current storm moves on could deliver almost continuous snow in mountainous areas, said Edan Weishahn of the weather service in Reno, which monitors an area straddling the Nevada state line.

Donner Summit, one of the highest points on Interstate 80 and a major commerce commuter route, could face major travel disruptions or road closures, Weishahn said.

Vail Resorts’ three Tahoe-area ski resorts opened with limited offerings over the weekend after crews produced artificial snow. Northstar and Heavenly were both able to open Monday, but Kirkwood could not, said spokeswoman Sara Roston.