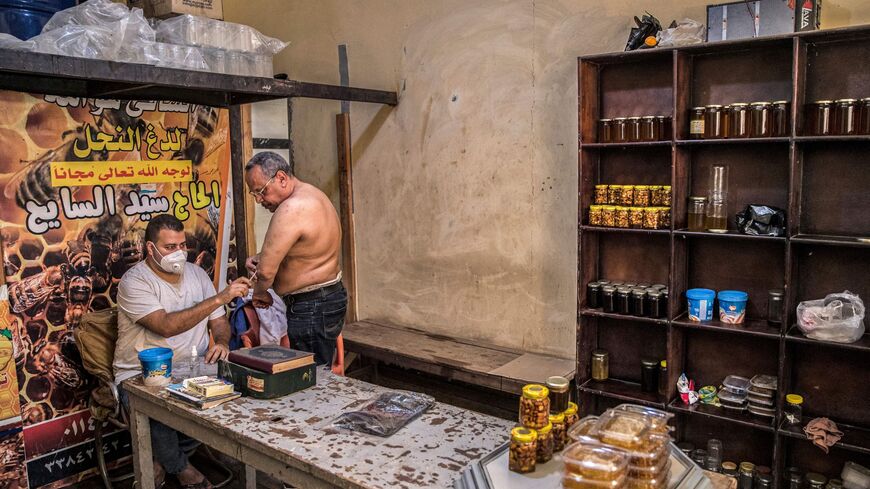 Wadi Al-Assiut’s 200 hives of bee breeds that stretch back millennia draw attention from researchers for the health benefits of the honey they produce.

Stretching over ​​8,000 acres, the Wadi Al-Assiut protectorate is home to a diversity of rare plants, animals and birds, making it a favorite destination for wildlife lovers and scientists.

The protectorate, about 50 km away from the city of Assiut, is the breeding ground of endangered species of wild animals and wild plants, most notably the last breed of Pharaonic bees whose honey has multiple therapeutic and nutritional benefits.

Wadi Al-Assiut is also home to different types of wild deer, hawks, and migratory birds. After the Jan. 25 revolution, the protectorate was subject to several trespassing incidents and violations, but “this natural reserve still reflects the beauty of the Egyptian Eastern Desert,” said Mahmoud Nafadi, director-general of the reserve.

The protectorate’s rare breeds of Egyptian bees produce a special type of honey with great medicinal benefits that are being studied by students of pharmacy and science. Nafadi asserted that these breeds have existed since the days of the pharaohs.

“We give a lot of attention to these bees,” Nafadi said, with 200 beehives for them, made of wood or of clay. “Our goal is to encourage the multiplication of our bee species,” he said. “We planted 1,000 Ziziphus spina-christi trees, known as the Christ’s thorn jujube, so that the bees can feed on them as a natural pasture. We want to continue breeding our species of bees and to make them available to beekeepers.”

“The reserve includes the apiaries of a rare pharaonic bee breed,” Ali Ahmed Morsi, an environmental researcher at the protectorate, told Al-Monitor. “The protectorate succeeded in multiplying these bees through continuous breeding operations. Foreign scientific missions from all countries of the world come specifically to study this breed, whose honey is of great health benefit.”

He added, “The protectorate was mainly established to protect plant and animal species, safeguard living natural resources, preserve healthy environmental processes in the ecosystem, and conserve genetic biological diversity. This natural reserve is the only breeding ground for endangered species of wild animals and plants in the Egyptian desert.” Studies of plant genetics from the reserve, he said, are being used for agriculture and genetic engineering.

Wildlife breeding in the protectorate includes Egyptian deer, mountain goats, peregrine falcons, hyenas, and red wolves, in addition to migratory birds from Asia and Europe, Nafadi told Al-Monitor. The natural reserve was officially declared a protectorate in 1989 at the recommendations of a joint study by the University of Arizona and Assiut University.

Plant species in the protectorate include several medicinal plants and herbs that are used to treat kidney stones, colds, cough, and asthma, Nafadi said. “A milkweed plant known as Calotropis treats wounds, acne, and skin infections,” he continued. “It is also used in the treatment of paralysis of the limbs, scorpion stings, and many other conditions. The roots of this plant are used in the treatment of filariasis.”

But Nafadi warned that the protectorate is suffering from neglect. “Despite being one of the most important international tourist attractions, the protectorate is not getting the needed tourism attention,” he said, and local residents violate the protected lands. “Even after getting violation reports, they keep cultivating and planting these lands,” he said. “These incidents caused the migration of many rare species of animals towards the desert.”

Nafadi also noted that the only animal that penetrated the reserve is a jackal referred to as Ibn Awa, which is not predatory to humans. “Hyenas in the protectorate are small in number and do not descend into the valley,” he said.

Because Assiut has a dry climate, many plants need to be irrigated, and the reserve’s underground well is currently out of order. “I submitted a request for a new well to the Ministry of Environment and we conducted a study for this purpose,” Nafadi said. “The protectorate is currently irrigated through a truck loaded with water tanks.”