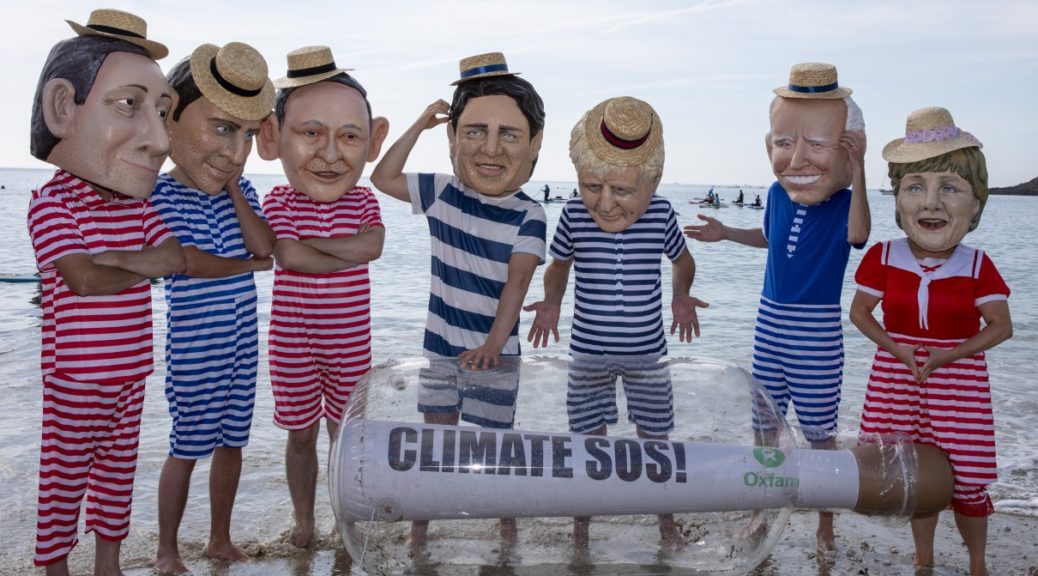 “Never in the history of the G7 has there been a bigger gap between their actions and the needs of the world. In the face of these challenges the G7 have chosen to cook the books on vaccines and continue to cook the planet.”

Anti-poverty groups, climate campaigners, and public health experts reacted with outrage and howls of disappointment Sunday after the G7 leaders who spent the weekend at a summit in Cornwall, England issued a final communique that critics said represents an extreme abdication of responsibility in the face of the world’s most pressing and intertwined crises—savage economic inequality, a rapidly-heating planet, and the deadly Covid-19 pandemic.

“This G7 summit will live on in infamy,” declared Max Lawson, Oxfam’s head of inequality policy, in a statement responding to the G7 communique at the conclusion of the weekend summit—a gathering characterized by the global progressive movement as an unmitigated disaster compared to what could have been achieved.

“Faced with the biggest health emergency in a century and a climate catastrophe that is destroying our planet,” Lawson said, the leaders of the richest nations “have completely failed to meet the challenges of our times. Never in the history of the G7 has there been a bigger gap between their actions and the needs of the world. In the face of these challenges the G7 have chosen to cook the books on vaccines and continue to cook the planet. We don’t need to wait for history to judge this summit a colossal failure, it is plain for all to see.”

“The G7 is not fit for purpose. They have operated without any concern for lives around the world—or even for our own ability to end this pandemic.”

While the G7 statement vows to “[e]nd the pandemic and prepare for the future by driving an intensified international effort, starting immediately, to vaccinate the world by getting as many safe vaccines to as many people as possible as fast as possible”—and the member nations pledged a collective 1 billion doses will be donated to benefit middle- and low-income nations—public health experts have been adamant voluntary charity and empty rhetoric—especially in the the absence of a joint commitment to lift patent protections for life-saving vaccines at the World Trade Organization—makes clear the richest nations would still rather protect the profits of the pharmaceutical industry than serve the world’s poor or see the pandemic eviscerated.

On Sunday, Global Justice Now executive director Nick Dearden—who has been on the ground in Cornwall throughout the summit—called the communique “shameful,” a document that “stresses ‘vaccines are a public good’ and ‘we need equitable access’ while then reinforcing the intellectual property system which enshrines the very opposite principles.”

“The G7 is not fit for purpose,” Dearden tweeted. “They have operated without any concern for lives around the world—or even for our own ability to end this pandemic.” Dearden said it was now clear that “profits first” is the true commitment of U.K. Prime Minister Boris Johnson and the other G7 leaders, and Global Justice Now suggested the only people who will be celebrating the bloc’s lack of ambition will be Big Pharma and its allies:

Meanwhile, the G7’s specific response to the climate crisis was seen as paltry, even if a modest step in the right direction. Thousands of climate activists demonstrated Saturday to demand the G7 leaders finally match their actions with some of their recent promises, but again the ambitions put forth Sunday by U.S. President Joe Biden, Chancellor Angela Merkel of Germany, and the other powerful leaders was seen as more of the same kind of failure that has become all to familiar.

“This summit feels like a broken record of the same old promises,” said John Sauven, Greenpeace UK’s executive director. “There’s a new commitment to ending overseas investment in coal, which is their piece de resistance. But without agreeing to end all new fossil fuel projects— something that must be delivered this year if we are to limit dangerous rises in global temperature—this plan falls very short.”

The G7 plan touted by its members on Sunday, said Sauven, “doesn’t go anywhere near far enough when it comes to a legally binding agreement to stop the decline of nature by 2030. And the finance being offered to poorer nations is simply not new, nor enough, to match the scale of the climate crisis.”