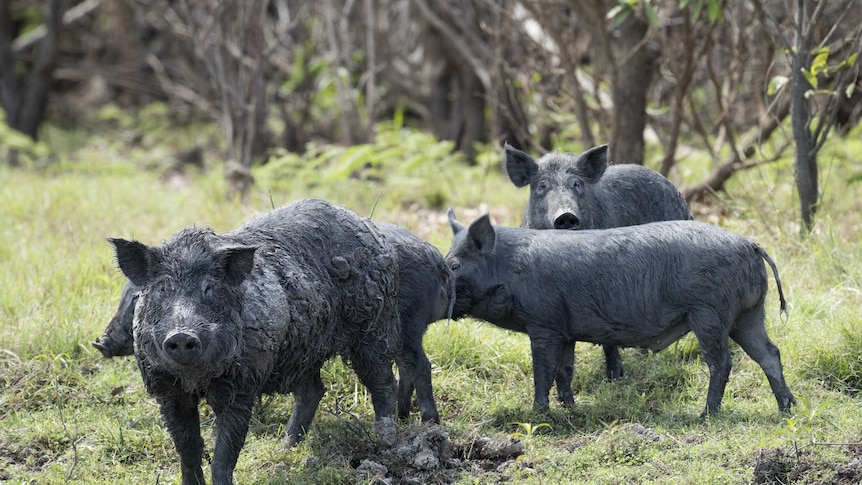 Feral pigs are releasing about 4.9 million metric tonnes of carbon dioxide across the globe annually – the same as 1.1 million cars

Tracks zigzagging across the heavy black soil are a common sight at Mark Dunne’s farm, an hour’s drive west of Rockhampton in Queensland.

It’s perfect for growing pulses and legumes, but it’s also a feral-pig magnet.

Mr Dunne’s 1,200-hectare farm can lose tens of thousands of dollars in a single season from pig damage.

“There’s only a couple here at the moment,” Mr Dunne said.

“They’re just foraging and looking around, but at times we can get mobs of up to 30 to 50.

In numbers that high, mobs of pigs can dig up a couple of football fields in a night.

Now new research from the University of Queensland (UQ) reveals the environmental threat from feral pigs is greater than previously thought.

By uprooting carbon trapped in soil, the research estimates that they’re emitting the equivalent of more than a million cars globally each year.

“Undoubtedly, when you disturb soil, there’s going to be emission, but we didn’t realise that it would be at that magnitude – 1.1 million,” lead author Dr Christopher O’Bryan said.

He says it’s a conservative estimate and emissions could be three or four times higher.

They found Australia and New Zealand produced the bulk of global emissions because the country has millions of pigs.

“We’re talking about a decent proportion — enough to catch your attention,” he said.

Dr O’Bryan said pigs in their native environment may damage soil, but they filled an ecological niche in the system.

He said soil contained almost three times as much carbon than in the atmosphere, so even a small fraction of carbon emitted from soil had the potential to accelerate climate change.

The research, published in Global Change Biology, warned of ramifications for curbing the effects of climate change into the future.

Feral pigs not only threaten species that are already in decline due to human pressure, but they have an impact on agriculture, cultural heritage and spread disease — like foot and mouth.

“It’s been estimated if [foot and mouth] disease were to spread through the wild pig population in Australia, this would be well over $50 billion in losses due to agriculture just in livestock,” Dr O’Bryan said.

Controlling them is challenging, however, because feral pigs are prolific breeders, producing two litters of four to 10 piglets a year in good conditions.

The federal Department of Agriculture has funded a National Feral Pig Action Plan, which it anticipates to deliver in September.

“And they estimate we need to get to 70 per cent reduction of population growth to prevent any sort of population recovery of pigs.”