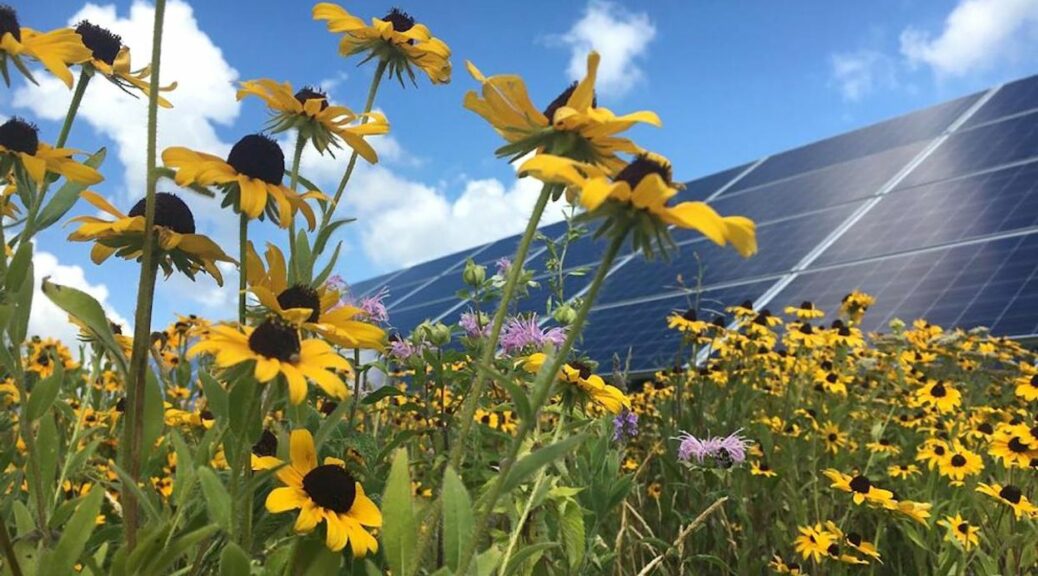 A new study finds that installing solar farms could become a two birds, one stone situation, as these areas can also double as thriving pollinator habitats if land owners allow meadows to grow around the solar panels.

The study, from researchers at Lancaster University in the UK that will be presented today at an Ecology Across Borders conference, shows that installing solar farms could be greatly beneficial to nature.

“Our findings provide the first quantitative evidence that solar parks could be used as a conservation tool to support and boost pollinator populations. If they are managed in a way that provides resources, solar parks could become [a] valuable bumble bee habitat,” said Hollie Blaydes, associate lecturer and doctorate student at the university. “In the UK, pollinator habitat has been established on some solar parks, but there is currently little understanding of the effectiveness of these interventions. Our findings provide solar park owners and managers with evidence to suggest that providing floral and nesting resources for bumble bees could be effective.”

While there’s no doubt that solar farms are helpful in generating clean energy, some critics say that these projects require extensive amounts of land that should instead be left untouched. Blaydes notes that solar parks disturb only about 5% of the ground, and these areas can also create new habitats for vulnerable pollinators, whose numbers are dwindling.

Wadi Al-Assiut’s 200 hives of bee breeds that stretch back millennia draw attention from researchers for the health benefits of the honey they produce.

Stretching over ​​8,000 acres, the Wadi Al-Assiut protectorate is home to a diversity of rare plants, animals and birds, making it a favorite destination for wildlife lovers and scientists.

The researchers note that there are benefits for land owners who want to install solar parks, too. These lands could become meadows, rather than turf, cutting down land management costs for maintaining grass and other interventions. Meadows could also support four times more bumblebees compared to land covered in turf grass.

Another interesting point of the study is that these solar farms could further support bee density up to 1 kilometer outside of the solar farms, and the pollinators could then tend to nearby agricultural crops as well.

The UK already has about 14,000 hectares of solar farms, which have gained both praise and grievances. But Lancaster University researchers continue to dispel concerns.

Another 2021 university study, in collaboration with Ludong University in China and University of California Davis in the U.S., found that solar farms produce “cool islands,” reducing temperatures by about 2.3°C (36.14°F) 100 meters around the solar farm. Cooling effects on a lesser scale extend up to 700 meters around the solar farm.Alona Armstrong, senior lecturer of energy and environmental sciences at Lancaster University and co-author of the cool islands study, said, “This heightens the importance of understanding the implications of renewable energy technologies on the hosting landscape — we need to ensure that the energy transition does not cause undue damage to ecological systems and ideally has net positive consequences on the places where we build them.”