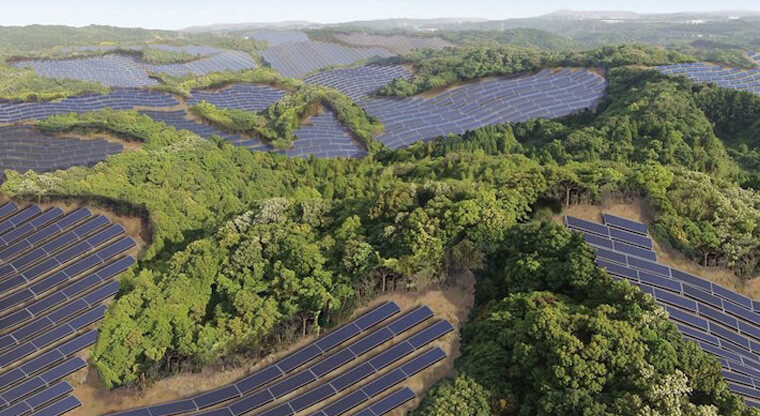 Few things scream ‘privilege’ the way playing golf does. Golfing has become a symbol of sorts, reserved only for those rich enough to afford it. The courses themselves have become a symbol: lavish, well-maintained, and large areas where people go about hitting the balls.

But the courses also pose a number of environmental problems. Despite being “green”, they don’t typically contribute to biodiversity, and often actually pose serious problems for local biodiversity, as they’re covered in short grass and frequented by humans. To make matters even worse, golf courses consume a lot of water. In the US alone, golf courses require over 2 billion gallons of water (7.5 billion liters) per day, averaging about 130,000 gallons (492,000 liters per day). However, some see an opportunity here — an opportunity to turn golf courses from an environmental problem into an environmental asset. How? By filling them with solar panels.

In New York, a 27-acre that started out as a landfill and then became a golf driving range in the 1980s was transformed into a solar farm in 2019.

“This solar farm is what hope and optimism look like for our future,” Adrienne Esposito, executive director of the nonprofit Citizens Campaign for the Environment, said in a statement. The non-profit had campaigned for the transformation of the golf course. “We know over the next 20 years, the sun will shine, the power will be produced and we will have clean power. We don’t know, and we may not want to know, the cost of fossil fuels.”

The move not only ensured electricity for around 1,000 houses in Long Island but it will also eliminate some of the pesticides and pollutants in the area — pollutants that the golf course used for maintenance. Overall, the move is estimated to generate $800,000 for local authorities.

This type of project is possible because of recent developments in solar panel technology. It seems like almost overnight, solar panels have become incredibly cheap, and it’s not just the panels themselves — a multitude of solar farm components are becoming cheaper, allowing solar energy to compete, even as the fossil fuel industry remains heavily subsidized.

Next Era itself is not entirely a renewable energy company but drawn in by falling prices, it’s focusing more and more on solar energy.

This is not the only project to turn golf into solar energy, and New York is not the only place where this is happening. Rockwood Golf Course in Independence, Missouri, has also gone through a similar transformation. In Cape Cod, Massachusetts, solar panels were chosen as the “lesser of two evils”, with the alternative being turning the golf course into housing, which would have caused more traffic and more pollution in the area.

It’s a perfect fit if you think about it — golf courses cover large areas of open land, which is exactly what solar farms also need. At the same time, the dropping prices of renewable energy make it a more attractive proposition.

These aren’t just isolated examples, a trend seems to be emerging, driven not just by decreasing prices of solar energy, but also by a decrease in the interest in golf. Between 2003 and 2018, golf saw a decline of almost 7 million players, and any hopes of turning the golf industry around were shattered during the COVID-19 pandemic. Halfway through 2021, the National Golf Foundation reported the closure of 60 18-hole courses, several of which have been replaced by solar farms.

But perhaps nowhere in the world is this trend as prevalent as in Japan.

Japan is turning its abandoned golf courses into solar farms

Japan even has a national plan to replace some of its golf courses with large solar plants.

This is remarkable because, despite declining costs of solar energy, Japan’s solar power is still far more expensive than the global average — and even so, the country feels like adding more and more solar farms. Renewable energy initiatives are welcome and heavily subsidized in Japan, particularly as the country is looking for alternatives to nuclear energy after the 2011 Fukushima plant disaster.

Japan’s golf courses were built during the country’s inflated-asset boom in the 1980s but interest continued declining as years passed. This is where solar energy enters the stage.

Solar energy has become a national priority for Japan, and the country has become a leader in photovoltaics. In addition to being a leading manufacturer of photovoltaics (PV), Japan is also a large installer of domestic PV systems with most of them grid-connected.

In an interview, famed astronomer Neil DeGrasse Tyson explained that we already have flying cars, in a way, because tunnels and overpasses allow cars to access the third dimension.

Naturally, the country also set its sights on golf courses, repurposing several of them for solar installations. The most recent of these, a 100 MW solar plant has begun operation in the Kagoshima Prefecture, becoming one of the largest photovoltaic facilities in the area.

In particular, rural golf courses in Japan were deemed as ideal places or new solar installations. A perfect example is up a mountainous road in Kamigori, in the Hyogo prefecture, where a new solar farm is installed in a former golf course link — generating enough power to meet the needs of 29,000 local households.

Another reason why golf courses are so attractive for solar investments is that the ground has already been leveled, and flood-control and landslide prevention measures are already in place. Essentially, golf courses check all the boxes for what you’d want in a solar farm.

All in all, a tide seems to be turning against some golf courses, and towards solar energy. Innovations on the technical side have made solar plants a cheap and competitive source of energy. The price of electricity generated by utility-scale solar photovoltaic systems is continuously decreasing, but solar plants do more than just offer cheap electricity — as the golf course showed, they have emerged as a space for sustainable innovation.