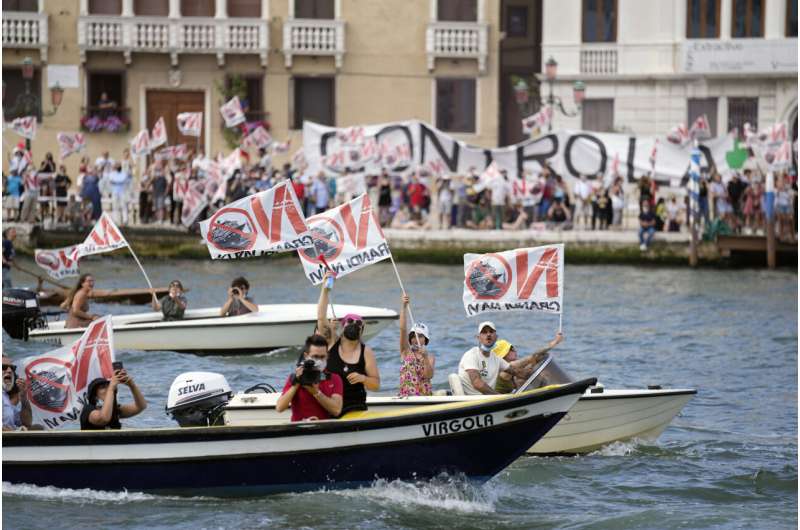 The first cruise ship since the pandemic wended its way Saturday through the heart of Venice, escorted by triumphant water-spouting tugboats and elated port workers as it traveled down the Giudecca Canal but also protested by hundreds on land and a small armada of wooden boats waving “No Big Boats” flags.

The battle for Venice’s future was stark as the MSC Orchestra set sail with some 1,000 passengers. The voyage heralded the return of cruise ships to the historic city of canals after more than 18 months, but the vessel reignited an anti-cruise movement that for more than a decade has opposed the passage of the enormous ships through the fragile lagoon due to environmental and safety concerns.

Italian Premier Mario Draghi’s government pledged this spring to get cruise ships out of the Venice lagoon, but reaching that goal will take time. Even an interim solution rerouting larger ships away from the Giudecca Canal is not likely before next year. Ridding the lagoon of the ships, which run more than 250 meters (yards) in length and weigh over 90,000 tons, could take years.

Venice has become one of the world’s most important cruise destinations over the last two decades, and in 2019 served as a lucrative turnaround point for 667 cruise ships embarking nearly 700,000 passengers and carrying a total of 1.6 million, according to the association Cruise Lines International (CLIA).

In all those years, no viable alternative has ever gotten off the drawing board.

The Venice Environmental Association, one of the groups against the ships, is demanding that Italian cultural and Venice port officials immediately ban ships from the lagoon, threatening legal action if there is no action within 15 days.

“It is a great provocation that a ship has passed,” Andreina Zitelli, an environmental expert and member of the association, said. “You cannot compare the defense of the city with the defense of jobs in the interest of big cruise companies.”

“We don’t want to be a corporate villain,” said Francesco Galietti of Cruise Lines International Italy. “We don’t feel we should be treated as such. We feel we are good to the communities.”