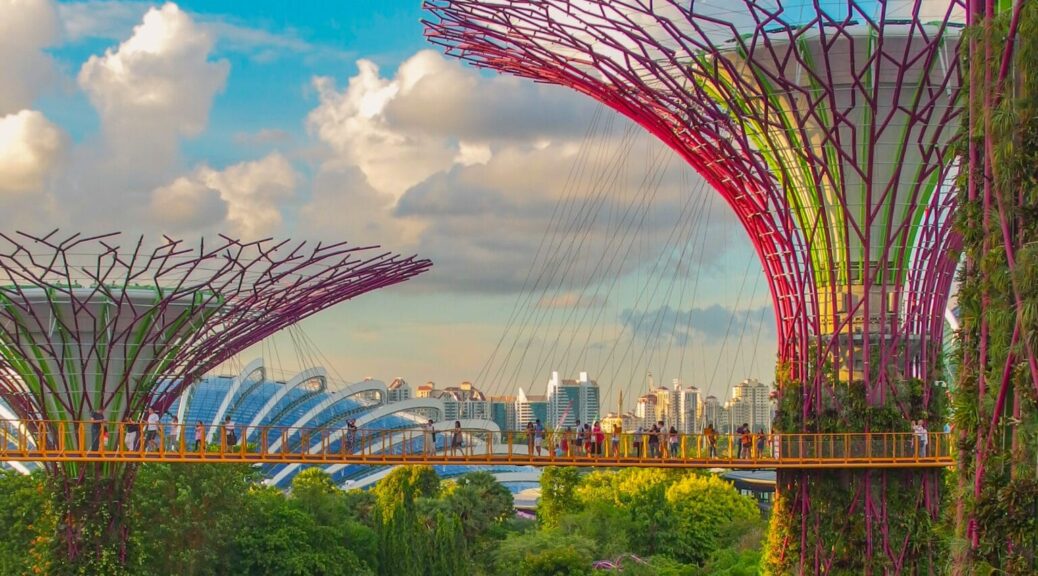 At first glance, solar trees might seem impractical — more art than function when compared to the best solar panels. But solar trees offer a few surprising benefits over their ground-mounted counterparts

Did you know that the shape of airplane wings were designed to mimic the sloped wing tips of eagles? That the ridges on whales’ fins that create an aerodynamic flow in water inspired the shape of the modern wind turbine? That termites drilling holes in their mounds to cool down in the desert summers influenced a method for designing more energy-efficient buildings?

Biomimicry has long been one of my favorite growing areas of science and sustainability — emulating models, systems or elements of nature to solve complex human problems. After all, mother nature has been around a lot longer than humans; she has a lot to teach us. So, as a specialist focused on solar energy, I’ve often wondered what nature can teach us about how to capture our power from the sun. Enter solar trees.

What Are Solar Trees?

A solar tree is a device resembling a tree in shape, but with photovoltaic (PV) panels in place of its crown. The “leaves” of the tree capture solar energy and convert it to electricity, with branches funneling that electricity down through a trunk and into a central battery within. In essence, they provide the same benefits as solar panels, but they use only a fraction of the surface area necessary for an array of solar panels.

Solar trees are not a new invention, but they’re enjoying a rising popularity. Most of our readers may recognize the most iconic solar trees in Singapore’s stunning Gardens By the Bay, as seen in productions like Crazy Rich Asians and The Bachelor.

As they exist today, more solar trees raise public awareness around sustainability than are used to generate residential or commercial power. What’s more, the trees are still perceived as “futuristic,” but it might be time we start shifting our mindset about these inventions by incorporating them into our vision of what sustainability looks like in practice. Here’s why:

At first glance, solar trees might seem impractical — more art than function when compared to the best solar panels. But solar trees offer a few surprising benefits over their ground-mounted counterparts, including:

We mentioned that solar trees serve essentially the same purpose as solar panels but require a much smaller footprint to do so. But are there any other significant differences outside the trees’ widespread adoption? Let’s dig in.

Solar panel efficiency is a measure of how much energy is produced relative to the amount of sunlight that strikes the panels. So, to compare a standard solar array and solar trees in terms of efficiency, we’d need to know the specs of the solar cells used within the tree.

However, when it comes to space efficiency, trees take the crown. This solar tree in West Bengal, India produces enough energy to power five homes in the U.S. Solar trees in Lynn Haven, Florida are capable of powering six to seven homes. Instead of using an entire roof to produce this electricity, the trees do so using only a few square feet of ground space.

Since solar trees are still rare in the U.S., the average installation cost is high. According to top solar tree company Spotlight Solar advertises total pricing to be $40,000 to $80,000. Based on current average solar costs, you could buy a 15-kW to 30-kW solar panel system (for context, the average home needs a system between 5 kW and 10 kW).

Of course, the complexity and size of the solar tree will influence the final price. Until solar trees reach the commercial mainstream, demand will limit their widespread availability.

Solar trees are used to produce electricity that will be used onsite. Storing and distributing the energy generated by the trees (like solar farms and power plants do) would require larger solar batteries and complex systems of transmission.

While solar panels are used primarily on rooftops or mounted on the ground, solar trees offer a different type of utility. In addition to energy, they provide shade and whimsy while taking up minimal surface area. A creative mind could find endless uses for these trees: shade for city sidewalks, parking lots, playgrounds, backyards and more. This brings us to…

THESE WINDOWS ARE SEE-THROUGH SOLAR PANELS

What if solar panels weren’t just on the roof?

In an interview, famed astronomer Neil DeGrasse Tyson explained that we already have flying cars, in a way, because tunnels and overpasses allow cars to access the third dimension. By that logic, India has invented ‘flying solar panels,’ which are being suspended above irrigation canals to cut down on the evaporation of precious water droplets by providing shade from the sun’s evaporating heat.

The Future of Solar Trees

The metallic, modern look of solar trees might turn off the average reader, but keep in mind that as the technology improves, investment flows and demand increases, they’ll become much more similar in appearance to real trees or other plants. This modern mimicry will allow us to blend the trees into our forests, yards, coastlines, parks and cities.

Apart from residential applications, here are a few of our favorite ideas for the uses of solar trees:

Solar trees may still be a few years from the mainstream, but relative to other solar panel alternatives like solar roads, they offer a lot more practical value. The efficiency and versatility of the trees make them ideal for cities and densely populated areas, making us think they will be commonplace sooner than you might expect.

Looking to “Plant” a Solar Tree?

The options are still somewhat limited, but there are a number of organizations that can install solar trees throughout the U.S. We’d recommend starting with these companies:

Smartflower offers stunning designs of solar devices in the shapes of trees and sunflowers, with solar petals tracking, opening and closing with the sun for optimal energy conversion. We’re talking about premiere trees here. Each tree has an output of 2.5 kW at peak power, which is about half the power production of a small home rooftop solar system.