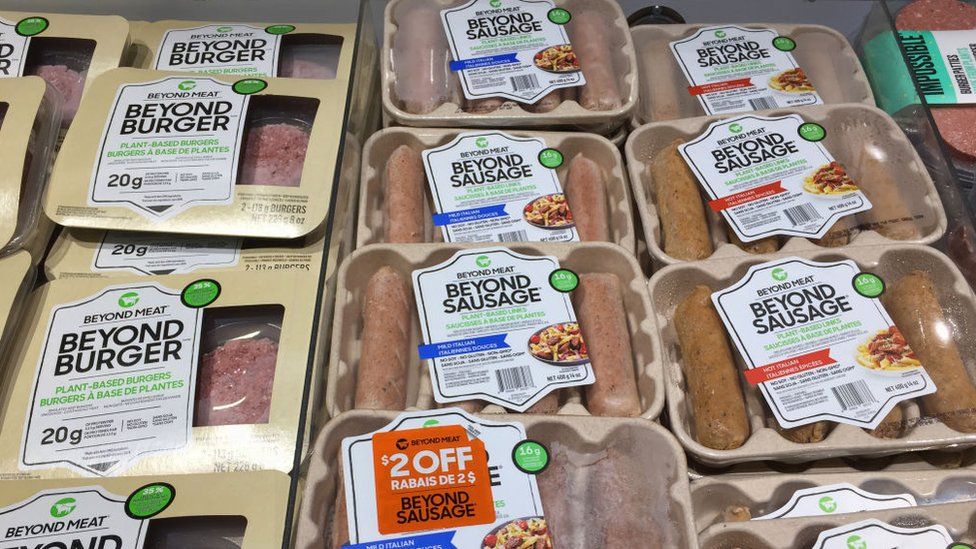 The founder of the world’s biggest plant-based meat company has suggested that a tax on meat could help tackle some of the problems from growing meat consumption.

Asked if he backed a tax on meat, Beyond Meat’s Chief Executive, Ethan Brown told the BBC “the whole notion of a Pigouvian tax, which is to tax negative, you know, things that are high in externalities, I think is an interesting one. I’m not an economist, but overall and totally that type of thing does appeal to me”.

Critics argue that such a levy would raise the cost of living and amount to unnecessary government interference.

Even without such a tax Mr Brown thinks that consumers are already starting to make the choice to eat less meat.

“If you look at shopper data that we have, 93% of the people that are putting the Beyond burger in their cart are also putting animal protein in,” he said.

“That says we’re getting more and more penetration into the broadest swath of the market, which is people who are consuming animal protein, but again, are hearing this information about their health or maybe hearing about climate, or maybe uncomfortable with factory farming, they’re deciding to cut down on their consumption of animal-based products.”

Pizza Hut has expanded its partnership with Beyond Meat by adding four new meat-free pizzas to its permanent menu in the UK. The new vegetarian pizzas enjoyed huge success in their trial run last year, however, they are not currently suitable for vegans.

The UK announcement is part of a global strategic partnership between Pizza Hut and Beyond Meat and builds upon previous launches, such as in the US, when Pizza Hut became the first national pizza company to launch a plant-based meat pizza across the country.

This year, Beyond Meat signed a partnership with Yum! Brands, which includes the Pizza Hut restaurant chain, as well as KFC and Taco Bell to make Beyond Meat the preferred supplier for Yum! Brands as well as developing plant-based menus for its restaurants.

Although the inclusion of dairy cheese on the pizzas may bemuse and discourage vegan consumers, the pizza chain is aiming to attract a younger consumer base, including Gen-Z and millennial consumers. Similar launches of vegan alt-meats paired with non-vegan dairy products have been seen recently in Little Caesars and its Field Roast collab, as well as Johnny Rockets and its Impossible Burger – which vegan customers would have to order: “bun-less or with lettuce”.

While the crossover flexitarian market is growing exponentially and the aim of these mainstream products is to introduce meat-eaters to meat alternatives, it may seem injudicious that so many large companies are following this path of “deveganizing” vegan products. With so many successful plant-based dairy products on the market, it does beg the question of why brands would continue to disregard the growing number of potential vegan customers.