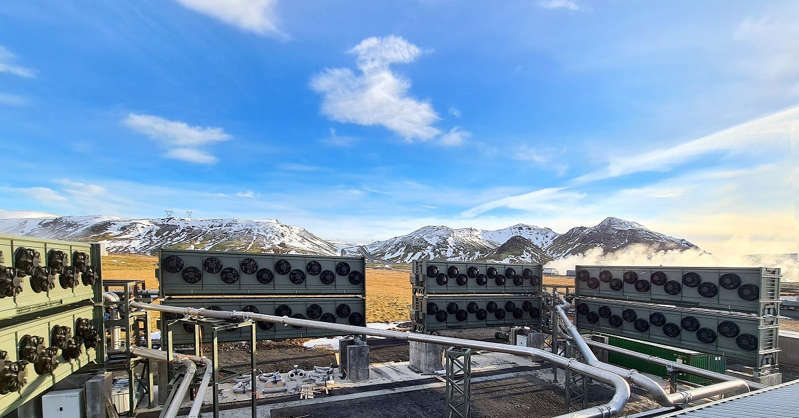 The world’s biggest carbon-capture plant – which sucks carbon dioxide out of the air – just opened.

A UN report says carbon capture technology is necessary if the world wants to be carbon neutral by 2050.

But many experts think the tech is too expensive and not scalable in the next few decades.

Framed by a backdrop of volcanoes, a semi-circle of gigantic fans in Iceland are sucking in air, super-heating it, then filtering out the carbon dioxide.

This carbon capture and storage facility, named Orca, turned on two weeks ago after more than 18 months of construction. The fans are embedded in shipping container-sized boxes, and once the carbon dioxide is separated, it gets mixed with water then travels through snaking, fat tubes deep underground, where the carbon cools and solidifies.

Through this process, Orca can trap and sequester 4,000 metric tons of carbon dioxide per year – making it the largest facility of its kind in the world (though there are currently only two running).

“Think of it like a vacuum cleaner for the atmosphere,” Julio Friedmann, an energy policy researcher at Columbia University who attended the plant’s ribbon-cutting ceremony, told Insider. “Nothing else can do what this tech does.”

According to the latest report from the United Nations Intergovernmental Panel on Climate Change (IPCC), carbon capture and storage is a necessary part of our best-case climate scenarios. But currently, facilities like Orca only negate a sliver of global emissions.

Climate scientist Peter Kalmus has done the math: “If it works, in one year it will capture three seconds worth of humanity’s CO2 emissions,” he wrote on Twitter.

Today the world's biggest carbon capture facility turned on. If it works, in one year it will capture three seconds worth of humanity's CO2 emissions… at incredible expense. I'm rooting for it, but only a fool would bet the planet on it. #EndFossilFuel pic.twitter.com/5ROJr4tPC9

Put another way, Kalmus told Insider, “at any given moment, it will capture one 10-millionth of humanity’s current emissions.”

“It’s remarkable to me it is being considered as part of those plans,” he said of the IPCC report.

‘Probably the most expensive solution’

The Orca facility works differently than the carbon-capture technologies built into some power plants, steel mills, and industrial facilities. Those collect the carbon produced in the manufacturing process before it enters the air. It can then be converted into materials like concrete or stored underground.

More than 20 facilities worldwide currently do this, most of which are in the US. But that simply prevents more carbon from accumulating in the atmosphere. Orca, by contrast, is an attempt to deal with the greenhouse gas that’s already up there.

This technology, known as direct air capture, is in its infancy. The Swiss company Climeworks, which built Orca, has the only operational game in town; its other plant is in Switzerland. Before that, the technology had only been used on a small scale in spacecraft and submarines.

Two other plants are in planning phases: The Canadian company Carbon Engineering, which is backed by Bill Gates, started designing a similar facility in northeastern Scotland three months ago. It also plans to start construction on a a plant in Texas next year. Each of those facilities could remove up to 25 times more carbon per year than Orca.

But as with many emerging technologies, direct air capture is expensive. Christoph Gebald, Climeworks’ co-founder, told the Washington Post that it costs at least $600 to capture one metric ton of carbon dioxide, since super-heating the air takes a lot of energy.

That cost would need to drop to one-fourth its current level to bring it in line with technologies like wind and solar in terms of their carbon abatement – the degree to which they reduce emissions. To sell carbon commercially – like to beverage companies making fizzy drinks – the price would have to get even lower, probably between $65 and $110 per metric ton.

Friedmann thinks a drop to below $200 is likely by 2030, and a drop to $100 two decades after that. By that point, he said, the market for carbon removal market – companies paying to abate their emissions – will have grown significantly.

But even at that $100 price, removing all of humanity’s annual carbon emissions would cost more than $5 trillion per year, according to Gates’ book, “How to Avoid a Climate Disaster.” That would require 50,000 Orca plants.

There’s also the question of timing. The IPCC report says that without capturing significant amounts of carbon over the next 30 years, it will be impossible to get humanity to net-zero emissions by 2050 – and, consequently, to limit warming to 1.5 degrees Celsius.

But Mathew Barlow, a climate scientist at the University of Massachusetts, Lowell, said three decades isn’t enough for the technology to be deployed widely.

“There’s no possible way for it to scale up on that timescale,” Barlow, who contributed to the IPCC report, told Insider. “We’re at the point where you need to get the tech off the shelves, not be building it out.”

Plants like Orca do, however, out-perform their natural counterparts – trees.

But trees capture carbon at a much lower cost of $50 per metric ton.

Kalmus thinks carbon capture ultimately distracts the world from other solutions that would make a bigger dent in emissions, like investment in renewables and regulations targeting the fossil-fuel industry.

“Fossil-fuel companies love carbon capture because it really does let them off the hook,” he said.

Friedmann, though, thinks it’s possible to expand carbon-capture infrastructure enough to make a difference. If the Senate’s infrastructure bill passes in the House, it would allocate $3.5 billion toward direct air capture facilities in the US. Elon Musk also announced this year that he’s funding a $100 million carbon-capture contest.

“We now know that we can do it,” Friedmann said. “Now we’re just haggling over price and literally asking how much we’re willing to pay to save the Earth.”