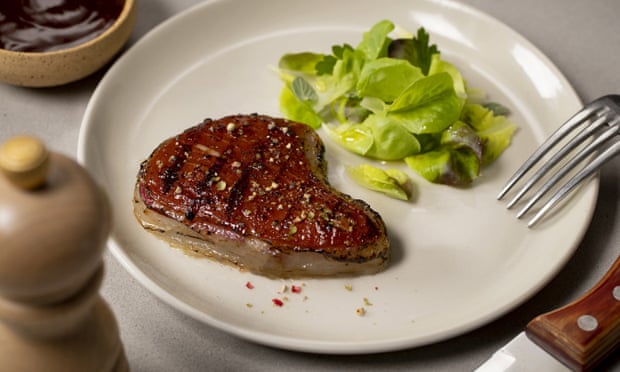 The largest lab-grown steak yet produced has been unveiled by the Israeli company MeaTech 3D, weighing in at nearly 4oz (110 grams).

The steak is composed of real muscle and fat cells, derived from tissue samples taken from a cow. Living bovine stem cells were incorporated into “bio-inks” that were then placed in the company’s 3D printer to produce the steak. It was then matured in an incubator, in which the stem cells differentiated into fat and muscle cells.

Companies across the world are racing to produce cell-cultured meat, arguing that creating meat without raising and slaughtering livestock is better for the environment, animal welfare and potentially health.

Sharon Fima, CEO at MeaTech, said: “The breakthrough is the culmination of over one year’s efforts in our cellular biology and high-throughput tissue-engineering processes, as well as our precision bioprinting technology. We believe we have placed ourselves at the forefront of the race to develop high-end, cell-based meat products.” Cell lines for pork and chicken are also being developed, he said.

The company said it aimed to produce cultured meat at the same cost as conventional meat. But the steaks will not appear on diners’ plates soon. The company’s first venture into the market will be to sell the cultured fat as an ingredient for other products, with a pilot plant planned for 2022.

“The MeaTech announcement marks an exciting step forward in terms of the complexity and sheer size of a cultivated steak,” said Seren Kell at the Good Food Institute (GFI) Europe. “3D printing enables companies to create more sophisticated ‘whole cut’ products which can authentically recreate the taste, texture and mouthfeel of conventional meat.”

However, one industry observer told the Guardian that 3D printing was widespread now and MeaTech had yet to show that its technology could be scaled up and produce steaks at a reasonable cost. The first steak cultured from cells was produced in December 2018 by another Israeli company, Aleph Farms, though the company said at the time that the taste needed more work.

Meat cultured from cells requires regulatory approval before being sold to the public, and this happened for the first time at the end of 2020, when chicken nuggets made by US company Eat Just were served to customers in Singapore.

Other companies pursuing lab-based meat include Mosa Meats in the Netherlands, set up by Prof Mark Post, who produced the first lab beefburger in 2013, and Memphis Meats, now part-owned by Tyson and Cargill, two of the world’s biggest meat companies. Another company, Meatable, aims to remove the need for repeated extraction of starter cells from animals by creating lines that multiply continuously.

The founder of the world’s biggest plant-based meat company has suggested that a tax on meat could help tackle some of the problems from growing meat consumption.

This week, scientists at the University of Lisbon in Portugal announced a GFI-funded plan to make seabass fillets from 3D-printed cells using ingredients from algae to create edible scaffolds for the cells to grow on. Frederico Ferreira, at the University of Lisbon, said: “I love fish and I want to carry on eating fish. There’s a role to play for small-scale sustainable fishing, but we can’t continue the deep-sea fishing that causes so much damage to ocean ecosystems.”

Kell said: “The race is on to produce whole-cut steaks, fish fillets and other meats using cellular agriculture. But to make these innovations accessible and to achieve the huge environmental, public health and food security benefits of cultivated meat as quickly as possible, we need governments to invest billions in research and commercialisation.”

Companies are also producing steaks from plant ingredients, with Spains’s Novameat delivering what it called the “most realistic” to date in early 2020. Its ingredients included pea, seaweed and beetroot juice, which were extruded into fine fibres to re-create muscle tissue.

In November, Redefine Meat presented its 3D-printed plant-based steak in London. The Guardian’s taster described its mimicry of real meat as “extraordinary”. Other firms working on plant-based meat include Atlast Food, which is using fungus fibres to create textures similar to meat.

Huge reductions in meat eating are essential in rich nations to cut greenhouse gas emissions from livestock and avoid dangerous climate change. One study found that avoiding meat and dairy products was the single biggest way to reduce an individual’s environmental impact. Plant products have very low emissions, but cell-cultured meat can require large amounts of energy to produce, potentially causing significant emissions if not from low-carbon sources.